What Exactly Happened When Perron, Marchessault, And van Riemsdyk Were In The Box 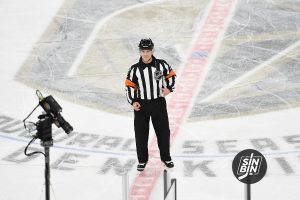 Don’t yell at these guys. They got it right. (Photo Credit: SinBin.vegas Photographer Brandon Andreasen)

Early in the 3rd period of tonight’s game David Perron and Trevor van Riemsdyk got in a little scuffle in the Golden Knights attacking zone. It then spilled over into the neutral zone where the play was eventually stopped and penalties were dolled out. Here’s exactly what went down, and why the penalties were served as they were.

Both Perron and van Riemsdyk were assessed with two minute minors for roughing. Perron was also assessed an extra 2 minutes, also for roughing.

So, because the penalties resulted in a two minute power play for the Hurricanes, an extra player had to go into the box to serve the two minutes of power play time. That player was Marchessault. The game was to continue in a standard 5-on-4 power play.

When the power play ended, only Marchessault should have been let out of the box. Van Riemsdyk had to remain in the box until the two minutes had elapsed and there was a stoppage of play, otherwise, Carolina would have had too many men on the ice.

When the two minutes elapsed, Marchessault was not properly allowed exit the box, however, the puck hit the netting in the Golden Knights zone, so there was no impact on the play.

Due to the stoppage, van Riemsdyk was also allowed out of the box at that time. The game was to then continue at 5-on-5.

Perron, having drawn a four minute penalty, had to serve all four minutes of his time. Therefore, he was to remain in the box until the second 2 minutes had elapsed and there was a stoppage in play. Similar to van Riemsdyk, Perron could not exit on the fly during play because it would have caused the Golden Knights to have six men on the ice.

Here’s the rule from the official NHL rulebook…

The key behind the entire situation is that power plays cannot be “pushed” to later in the game. If the penalties were simply served as they were handed out, the Hurricanes would have had to wait two minutes for their power play. The NHL does not push power plays, they are to be played immediately after the infraction. So, that’s why all the madness comes in and why extra guys are in the box, other guys can’t leave, and one team sort of served six minutes of penalty time.

No one scored, so who really cares. But that’s what happened.