“Every Team Goes Through A Losing Streak, Except For Vegas Apparently”

TSN’s Bob McKenzie was kind of joking, but inside of his little quip, he pretty clearly called the Golden Knights the most consistent team in he NHL. 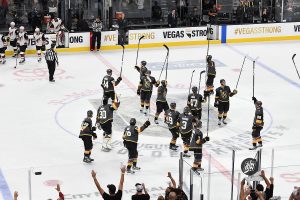 McKenzie was discussing the ebbs and flows of the regular season, and how all teams have dark periods. He used Tampa Bay as an example of a top team that found some mid-season struggles. In fact, it began after the Lightning lost in Las Vegas with 2.3 seconds left in the game. Tampa Bay went on to lose seven of their next 14 games, with two and three-game losing streaks thrown in. The Bolts had only lost two-games in a row once before their December skid.

Every team in this league except Vegas it seems, goes through a period where you’re not as good as you were. And you lose a little bit more than you win. -Bob McKenzie, TSN

McKenzie was simply implying that it’s a long season, and even the better teams play a stinker now and then. He amusingly noted the Golden Knights could be the one team not affected by the NHL midseason flu.

And as I said, Vegas seems to be immune from that so far. I keep going on radio stations across Canada and saying, oh they’ll hit a losing sometime. It’s just a matter of when. -McKenzie

The Bobfather shouldn’t be too hard on himself, because every analyst expected a fall off point for the Golden Knights (except Ken, I’ve got to give him that at least). It’s hard to believe but Vegas has lost three-games in a row twice this season.

I’m not predicting they’ll fall apart, because what you see is what you get from Vegas. -McKenzie

Typically he’s right, most contending teams fall into ruts. Last year’s champion Pittsburgh Penguins lost eight of their last 15 games. Vegas had a bit of a rough patch early in the year when they dropped nine of 16 including both of their three game losing streaks, but they did it without Marc-Andre Fleury, and rattled off a five game winning streak in the middle of it. They also followed it up with a 13 game point streak, winning 12 of those games.

Every team goes through a losing streak, except for Vegas apparently. -McKenzie

Like all of us, McKenzie is having a lot fun watching the Golden Knights historic beginning. If Vegas does veer off from the winning path, let’s hope it’s before April.