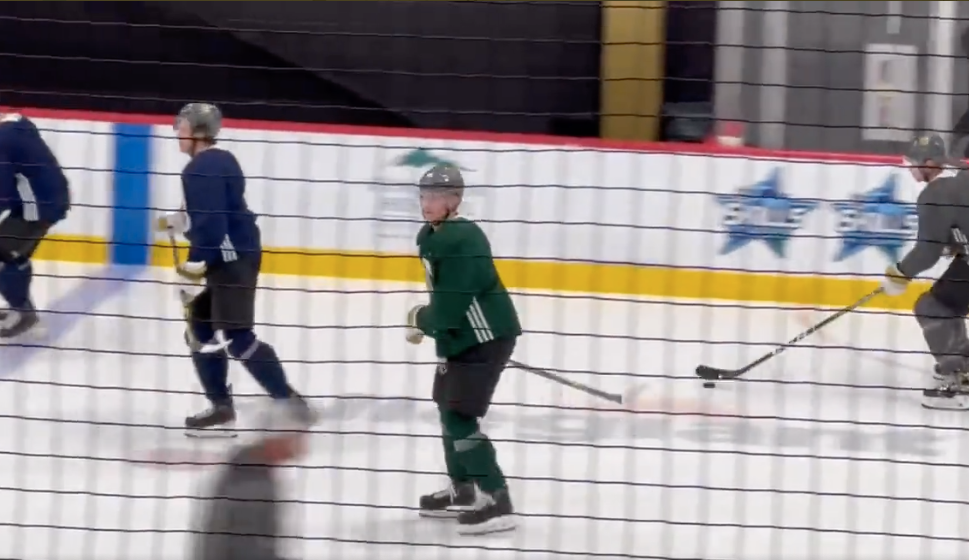 In his first practice in a full-contact jersey as a Golden Knights, Jack Eichel skated with a line of extras during 5-on-5 drills. But, when the team broke off into special teams units, Eichel traded his “fifth line” green jersey for a top power play unit white jersey and assumed his role on the half-wall to the right of the goalie.

If there’s one thing we know about Jack Eichel, it’s that he can score. He’s posted 139 goals in 375 NHL appearances and is nearly a point per game player over his six-year career (355 points). He’s scored 41 of those 139 goals on the power play and has added another 86 PP assists bringing his man-advantage total to a whopping 127 points.

There’s a ton of talent and I think you need to have a plan, get everyone on the same page, and build a little chemistry. But I do think that’s an aspect of the game that I can definitely help the team with. Power play is probably one of my strong suits and I hope to help the group. –Eichel on Missin Curfew Podcast

He worked on a unit with Mark Stone, Max Pacioretty, Evgenii Dadonov, and Shea Theodore in practice on Monday.

That’s a unit that with Chandler Stephenson in Eichel’s new spot has had runs of success when healthy this season. Pacioretty’s shot is always a threat from the circle, Theodore is very good at getting pucks through from the high slot, and Stone and Dadonov have started to perfect the below the goal line to low-slot pass. With Eichel’s creativity, shot, and power, he could be a real difference-maker on a power play that could still use improvement.

VGK’s power play currently ranks 17th in the league, hitting at just under a 20% clip. However, they still fight through stretches where they struggle to enter and/or turn stagnant in the offensive zone.

Eichel was featured on an All Star Game edition of the podcast Missin Curfew with former NHLers Shane O’Brien and Scottie Upshall. During that podcast, O’Brien had an interesting take on power play coaching.

I always said this about the guys that would coach the power play in the NHL, unless my power play guys would come to me, I wouldn’t even really coach guys. Power play guys, they know what they are doing, if they need some advice, they’ll ask you. Don’t tell them to go here or there, they are the best players on your team. –O’Brien on Missin Curfew Podcast

The guys have to kinda run that, the power play. Obviously, the coaches have their input. We were good in Buffalo a few years and the few years we were really good on the (power play) the coach would sorta let us do our thing and obviously it worked out well. –Eichel on Missin Curfew Podcast

Vegas’ power play has been much maligned since the 0 for 15 run in the series against Montreal. Hopefully, Eichel is the solution, and the coaches stay out of his and his teammates’ way.

**Here’s the full interview with Jack Eichel on the Missin Curfew Podcast.**