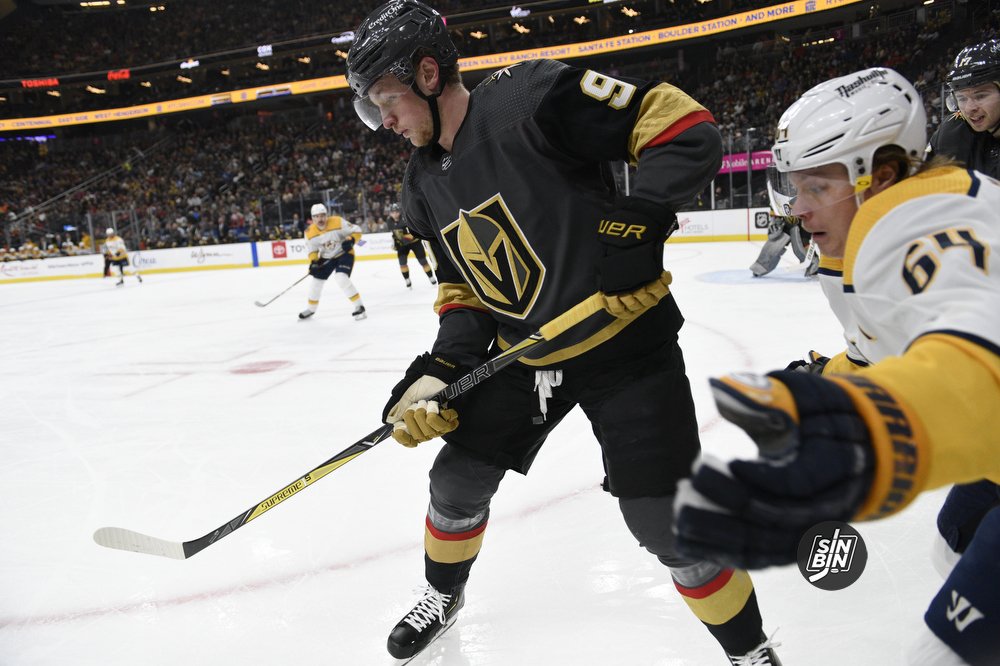 As the Golden Knights continue to return to health, the number of lineup options for Bruce Cassidy begins to grow. As players have funneled into and out of the lineup we’ve been able to see a good number of different combinations with the forward groups.

With it has come quite a bit of information. Some of it’s been good, some not as much. We’ve certainly learned that Chandler Stephenson and Mark Stone can succeed without Jack Eichel. We also know that the 4th line seems to operate best with Nic Roy in the middle. And while “Plan E” of Michael Amadio fits at the moment, it took Plans C, D, F, and G to settle on this one.

Another particular piece of knowledge that has been gained across the month of lineup mishmash has been the value of having another center on the line with Jack Eichel.

In his 28 games this season Eichel has played on three different lines. First, it was Eichel with Smith and Kessel, then he found his way to the most consistent line with Stone and Stephenson, and finally, yesterday’s return to the lineup matched with Smith and Roy. It’s been easy to see that in the games in which he’s had another center on his line, the group works more seamlessly in all three zones.

It’s huge to have another center on the ice. Both of us can take draws and you are interchangeable when you need to play low in the D-zone. -Eichel

The typical responsibilities of the center in Cassidy’s system (and most systems for that matter) involve playing much closer to their own goal in the defensive zone. And while Eichel has certainly put forth a better defensive output this year than much of his career, the benefit of having someone else doing that job can help unlock Jack’s speed and prowess through the neutral zone when the puck is eventually broken out.

Last night’s goal was a perfect example. Roy is the acting center in the defensive zone as the Golden Knights attempt an exit. A battle along the wall is won by Smith which then springs Roy into another battle in the neutral zone. When Roy wins it, Eichel, who was previously posted up on the right wing defensively, is now in plenty of space to receive the pass and head in on goal.

Of course, if the roles were reversed, Eichel is fully capable of making the play Roy made to set up the chance, but if the Golden Knights could choose, they’d always prefer the puck on Eichel’s stick for the finish. That’s exactly what happened in large part because he was on the ice with another center.

It’s just an easier switch to go down low when you’ve been a center before than a winger going down there. It’s a tougher position to play and there’s more responsibility so it’s definitely a ‘more the merrier’ situation. -Bruce Cassidy

The trick becomes keeping it that way as wingers return to the lineup. With Jonathan Marchessault’s pending return, it seems like he will slot onto Eichel’s right wing and Roy will move back to the 4th line. Cassidy has mentioned his ideal lineup would have Eichel, Karlsson, Stephenson, and Roy as the four centers, and it appears that will be the case as soon as tomorrow. That will inevitably leave Eichel as the only true center on his line.

The success of pairing another center with Eichel has to be sticking in the back of Cassidy’s mind though. So, it shouldn’t be a surprise if one of those centers finds his way back onto Eichel’s line sooner than later.