The Golden Knights entered Game 4 understanding they were playing against a desperate team, but they also knew they had a chance to all but bury the Sharks with a second consecutive road win. After taking a bit of time to get going early in Game 3, the Golden Knights came out looking like themselves to begin in Game 4.

Then, it all got flushed down the toilet when a line Vegas had bottled up all series, San Jose’s fourth, ran a play, and an illegal one at that, in which the Sharks have become synonymous with. Our buddy Sheng Peng from HockeyBuzz pointed the play out before the series. (Click through for a thorough breakdown of it)

As Marcus Sorensen skated from the red-line out, Eric Fehr heads back towards the red-line to cross up the defense. Legally, you can skate by, as long as there’s no contact. Here’s the play, you tell me if there’s contact.

It’s not legal doing that, so there’s nothing necessarily we can do. The refs just need to be aware, they were aware in the 2nd period and they called it, but the 1st period they got those two goals because of that and it’s unfortunate. The game moves fast for the refs too and that’s the way it went. -Jonathan Marchessault

The second Sharks goal is debatable, but the first one isn’t. What Eric Fehr did on that play is illegal. He should have gone to the penalty box and served two minutes, instead, it led directly to San Jose’s first goal and a downward spiral on the night for the Golden Knights.

You guys saw the play, that’s all I’m going to say. -Gerard Gallant

Like the overturned goal that wiped away the game-winning goal in Game 2, the “pick play” didn’t lose this game for the Golden Knights (more on that later), but it certainly didn’t help. Vegas had San Jose on the ropes and the first goal of the game could have easily flipped Game 4  in the other direction. The Golden Knights were playing fine and drew a penalty. It wasn’t called and it led to more than just a one-goal deficit, what it led to was a much more confident San Jose team. A team that went on to play their best game and sent the series back to Las Vegas tied at two.

I think we played well enough to win the first three, tonight, no, and we didn’t play bad tonight. They played the best game of the series in my mind. -Gallant 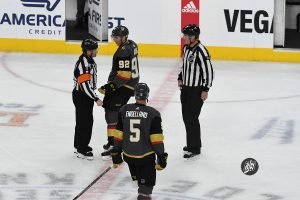 Don’t want to be talking about these guys, but they’re leaving us no other option. (Photo Credit: SinBin.vegas Photographer Brandon Andreasen)

It hasn’t just been these calls. There have been three goalie interference calls that have all gone in the Sharks favor. In Game 2 the Sharks skated around for more than five seconds with six men on the ice. Tonight, Martin Jones put the puck out of play for a delay of game and Melker Karlsson whacked Colin Miller in the face with his stick. All of these plays happened with the games still and balance, and they’ve all added up to a feeling that the scales are tilted a bit against the league’s 31st team.

Now, it’s a three-game series and while the Golden Knights are two games away from the Western Conference Finals, they’re also two games away from the end of the fairy tale. Vegas still controls this series, but they do not have the stranglehold they had on the Pacific Division all season, and they do not have the stranglehold on the series like they did all series against Los Angeles.

All teams’ chances in the playoffs are fragile because every matchup is against a great hockey team and the margins of error are minuscule. No one needs to feel like they’ve got to beat out the refs as well, and unfortunately, through four games of the series, there’s no way to help that feeling for the Golden Knights.