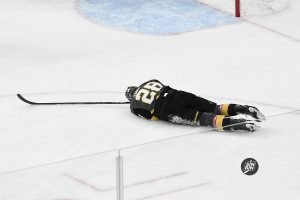 This was the aftermath of the hit. (Photo Credit: SinBin.vegas Photographer Brandon Andreasen)

The NHL has reviewed a Game 1 hit by Drew Doughty, and reported by Sportsnet’s Nick Kyprios, the Kings defenseman has been suspended for one playoff game.

The hit in question was a 3rd period illegal check to the head of William Carrier. Carrier left the bench momentarily but returned before the game was over. He never re-entered the game.

Doughty will serve the suspension in Game 2 of the series. He will be eligible to return to the Kings lineup on Sunday in Los Angeles for Game 3.

Doughty delivers a high forceful hit that makes Carrier’s head the main point of contact on a hit where such head contact was avoidable. This is an illegal check to the head. -NHL Department of Player Saftey

Here's the full transcript from William Carrier's first meeting with the media following the hit that got Drew Doughty suspended for Game 2. pic.twitter.com/4hz5FVaGd2