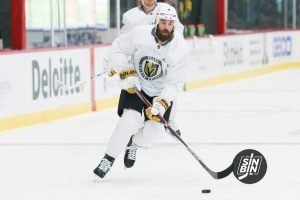 Oh how much we miss you on a night like tonight Clayton Stoner. (Photo Credit: SinBin.vegas Photographer Brandon Andreasen)

Tonight the Golden Knights are seeking their fifth divisional win and third in a row. Vegas is 4-1-0 in the Pacific and are just one point out of first place with two games in hand.

Divisional games are supposed to have more energy and passion than other games on the schedule. Against the Kings, fans of both teams felt the playoff-type atmosphere at the T-Mobile arena. The real question is, did it feel like the beginning of a rivalry to the teams playing?

It does, it does. They play hard, they play a fast game. Their crowd is into it. They’re a really good addition, and will be a rival in the division. -John Stevens, Kings Head Coach

Wasn’t just him either.

Yes definitely, the building was loud and had a lot of energy. They are a good team and a fast team. They came out hard right away and we weren’t ready for it. -Trevor Lewis, Kings Forward

The Golden Knights have made it rather clear to the Pacific Division, they are not your traditional expansion pushover.

Any time you play a team in your division, you expect a hard-fought game. I think (they) came up, forechecked, and like I said, they came up ahead of us and we weren’t able to battle back. -Tanner Pearson, Kings Forward

Wasn’t just the Kings guys either.

Yeah, we’re gonna start the rivalry now. There’s a lot more battles to go before we can call it a true rivalry, but I think the crowd makes it great too. – David Perron

It did yeah, it was pretty intense. You could hear the LA fans early on, but I thought our fans took over for sure. Talking to the the guys last night, it was a crazy atmosphere for sure. To have a new team like us come in and have that type of atmosphere in a building where not too many teams want to come in and play in. I’m really glad to be a part of it. -Shea Theodore

The budding defenseman had his strongest Vegas performance against LA and will look for it to continue… and yes, it has something to do with who they’re playing.

I got a little motivation behind me going into Wednesday. I’m looking forward to it. -Theodore