There are many reasons for the Golden Knights offensive success. Let’s start with the number of Vegas players having career years (it’s basically all of them). Secondly, younger players are quickly blossoming with more ice time and room to grow (see Karlsson, Tuch, Haula, Theodore, Schmidt, Miller, etc). Lastly, the Golden Knights are one of few teams getting help from their bottom six forwards, something we call “depth scoring.” 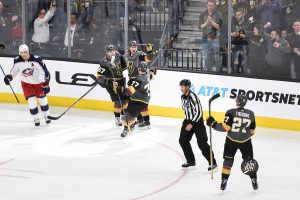 The goals aren’t all coming from Wild Bill, and that’s one of the big reasons why this team is good. (Photo Credit: SinBin.vegas Photographer Brandon Andreasen)

All Star coach Gerard Gallant is blessed to have the depth scoring his team has. Nine Golden Knights have more than 20 points. Only nine other NHL teams can claim that.

To go even deeper, the Golden Knights have 16 players with 10+ Points. Only Chicago, Colorado, New Jersey, New York Islanders, Toronto, Washington, and Winnipeg can claim that.

Of course, we’re all aware of the offensive success from their top two lines. Erik Haula, James Neal and David Perron have done their job scoring 50 this season. VGK’s second top trio of William Karlsson, Jonathan Marchessault, and Reilly Smith have totaled a remarkable 56 goals. The other 56 tallies were scored by defensemen and bottom line forwards.

Where Does VGK’s Depth Scoring Come From?

Offensive depth gives flexibility to the coaching staff. Gallant confidently plays all four lines for a reason. The versatility of players like Tuch, Eakin, Lindberg, and Bellemare allow for in-game options. Defensively, players like Miller, Theodore, and Hunt can jump up in the action and become a fourth offensive weapon.

Here I go again, talking about the playoffs. Turk, please don’t fine me.