Just a few days after the Golden Knights announced the Chicago Wolves as their primary AHL affiliate, a tweet may have spilled the beans on Vegas’ plans for the ECHL. 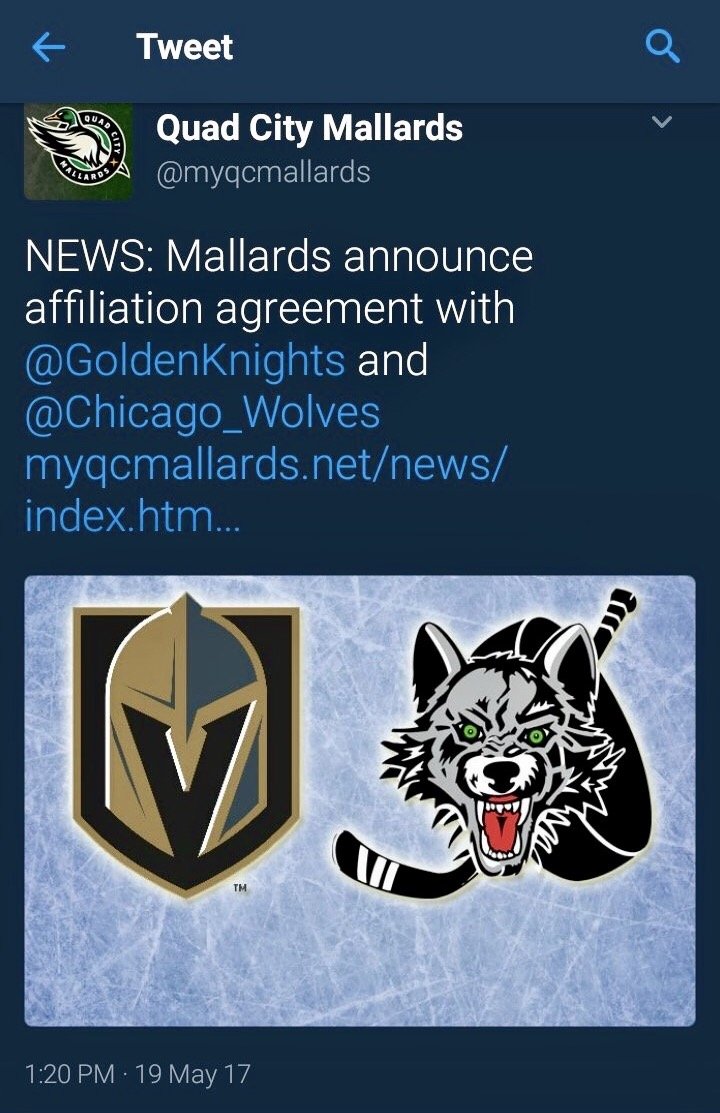 The tweet was deleted shortly after it was posted and the story linked in the tweet is no longer on MyQCMallards.net.

It was premature, we do not have anything to announce a this time regarding our ECHL affiliation. -Eric Tosi, VP of Communications

The Quad City Mallards are an ECHL franchise located in Moline, Illinois. They have been the ECHL affiliate for the Minnesota Wild/Iowa Wild since 2013.

Phil Axtell has been serving as the team’s head coach since January 25th, 2017 when Terry Ruskowski was relieved of his duties. On April 27th it was announced via the team website Axtell will to retain the job heading into the 2017-18 season.

The Mallards were eliminated from the ECHL playoffs on April 22nd losing to the Fort Wayne Komets.

There is no information available on the length of the Wild’s agreement with the Mallards which means we are unsure if this will be a primary affiliation or if the Golden Knights will share with Minnesota. Vegas is not expected to have many players at the ECHL level in 2017-18 so it’s more likely to be an “association” (like the Blues to the Wolves) than a primary affiliate.

The team would not give any indication as to when they plan on making their ECHL plans official.

Through the glory of Twitter we have learned a few pieces of info pertinent to this story. First, according to TheSinBin.net (amazing name btw), the Wild’s contract with the Mallards ended at the conclusion of this season. Also, according to @HFnewsjunkie the ECHL no longer allows true dual-affiliations.

May Not Be A Golden Knight Yet (Or Possibly Ever), But We Like Tyler Wong