The Golden Knights had just one power play in their first game, but those two minutes were the perfect illustration of the challenge facing the coaching staff in creating their power play units this season. 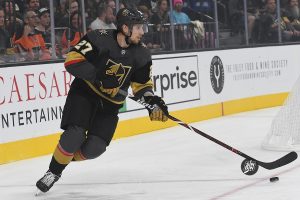 With two elite power play quarterbacks on the team, the Golden Knights knew they needed to find a way to ice two units both stocked with scoring talent.

It’s the second unit where things get interesting. Shea Theodore plays alongside Alec Martinez with a trio of forwards including Alex Tuch, Jonathan Marchessault, and Reilly Smith. It has the potential to be a great unit, but for one issue, there’s no one to take the draws.

Well, I don’t know if we’re comfortable (not having a center on the unit). It’s not the optimum situation obviously. Right now we’re trying to put our two best units together. We love the feel of the two units when they get the puck and get set up so we’re willing to give up a little in the faceoff department to get started. -Pete DeBoer

On that single power play last night, the concern came to the forefront immediately. After a strong 45 seconds by the first unit including a few shot attempts from Pietrangelo, the second group came out for an offensive zone faceoff. Tuch lost the draw and the Ducks quickly cleared the zone. The Golden Knights took a bit of time trying to re-enter the zone, never fully did on three tries, and an offside call forced another draw outside of the zone.

At that moment, with 30 seconds left on the PP clock, the Golden Knights flipped right back to the first unit.

It was an area of emphasis for us in the offseason and adding Pietrangelo definitely gave us the option of having two elite quarterbacks, two units, rather than a 1A and 1B. It’s critical, especially the deeper you go in the playoffs and the better the opponent those little details, the special teams, faceoffs, separate the teams at that point. -DeBoer

The Golden Knights have two bonafide #1 units, but without a reliable option to win faceoffs, it’s likely they will be forced into situations similar to the one they faced last night where they have to default back to the first unit on any draw.

In practice today, the second unit was moving the puck around with ease, even scoring one of the nicest tic-tac-toe goals you’ll ever see. So, clearly, when they have the puck, they have a real chance to be dangerous. But, how long will DeBoer put up with it if they don’t?

We’re hopeful the faceoff situation, guys will dig in, guys will help each other, some guys will become better at it and it won’t become an issue but it’s something that if we can’t get fixed with the personnel we have we might have to look at some different options. -Deboer

Maximizing the power play talents of both Theodore and Pietrangelo will be crucial in the long-term success of the Golden Knights this season.

There’s reason to believe these units could offer just that, but there’s also reason for concern that they won’t.