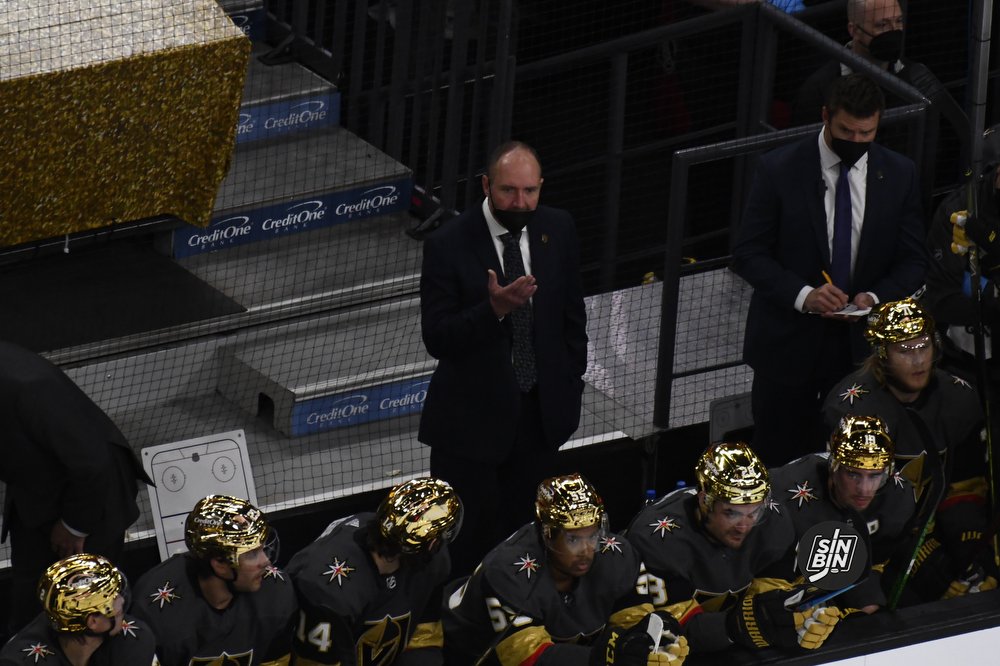 There have been times that coach Pete DeBoer has been outcoached. Without dwelling on bad memories, his last two conference final exits were not his best moments. Last night however, was a great example of how the well-prepared, strategic leader can get the most out of his lineup.

In 14 games this season Vegas’ coach has used 29 separate players due to several devastating injuries. That’s one less than DeBoer needed all of last season. He’s needed the entire roster including a handful of Silver Knights. Not one of them are first round picks and all have incredibly limited experience. Through his leadership the rookies and journeymen have been good enough to help Vegas climb two games above .500. What makes his coaching so impressive is who the Golden Knights are winning with and without.

Early on it looked as if Vegas would severely struggle without their heavyweights Mark Stone, Max Pacioretty and William Karlsson but Vegas’ ragtag bunch have performed well enough to win seven of their last nine games, which is a testament to the coaching staff.

Every skating unit for Vegas is less experienced and less talented but DeBoer has gotten the most of his replacements. Depth scoring put the team in control last night against Minnesota, receiving two of their three goals from players who had never scored before in the NHL. The coaching staff built confidence, taught patience, attention to detail, and hard work as Vegas dug out of their early ditch. Sure it’s cliché, but when the stars are hurt it really comes down their backups  understanding and executing their roles.

While there’s still plenty of hockey left, DeBoer should be considered up to this point, a coach of the year candidate. What he’s been able to do with less is hard to ignore. His team is stacked defensively and profits from steady goaltending, but the real surprise is Vegas’ offense. A team that once had trouble scoring now boasts 3.3 goals per game.

Once the gang is back, including Jack Eichel, the Golden Knights coach won’t need to rely simply on structure. No matter how many goals they score and games they win this season, unfair or not, DeBoer’s final grade will solely be based on postseason success. For now, let’s give the third year coach major credit for getting most of his players and finding ways to win. And I don’t know, maybe it’s worth sprinkling a few bucks on DeBoer to win the Jack Adam’s award.