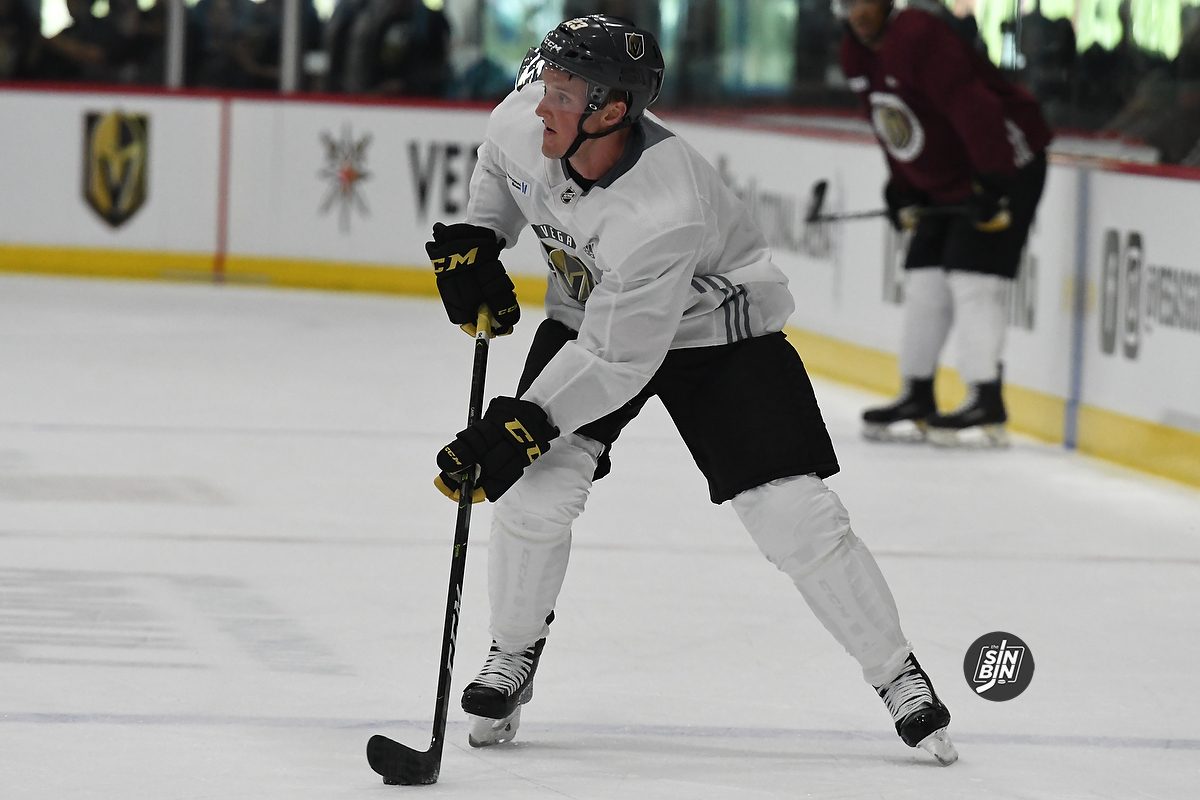 Carr is in a group with Lindberg, Carrier, Carpenter, Hyka, Pirri, McKenzkie, and others all competing for one or two roster spots. (Photo Credit: SinBin.vegas Photographer Brandon Andreasen)

Some in Montreal found it puzzling why the Canadiens let RFA Daniel Carr fall into the free agency market. It didn’t take long for Golden Knights GM George McPhee to sign the left-handed forward to a one-year, one-way contract worth $750,000.

I’m here to prove I’m an NHL player. I’m going to play my game and play it to the point where you don’t really give them the choice. -Daniel Carr

Carr is fully aware of the offensive logjam in Vegas. Realistically, he’s fighting for a bottom six spot with a group of about eight other forwards. Carr does have a few things working for him. He has 94 NHL games under his belt and he has the ability to boost some much-needed offense on the bottom two lines.

The way this team plays… it just makes hockey fun. It’s like ‘okay everybody, go out there, and make plays.’ It’s just fun. The system just lets you go play. It’s kinda like letting your hockey senses take over and just go out there. It makes the game easy, and it’s just fun. -Carr

Carr had early successful in Montreal, and when I say early, I mean it. In his first NHL career game, the 26-year-old scored his first goal on his first shift. However, over time Habs coach Claude Julien juggled his lines so often that Carr was a healthy scratch for many games last season.

As an undrafted player, Carr has had to grind it out, shuffling between the AHL and NHL. Scouts in Montreal liked his shot and an unwillingness to head to the net. That was a large part of his offensive success in the AHL. Last season with the Laval Rocket, Carr totaled 19 points (11G, 8A) in 20 games.

I gotta keep coming in everyday and be ready to play. -Carr

As a college hockey fan, I had to ask Carr about winning the 2014 NCAA Frozen Four title. The Union College Dutchmen led by Carr and Flyers defenseman Shayne Gostisbehere was (32-6-4) and earned a one seed in the NCAA tournament. Other than a one-goal victory against Boston College in the semi-finals, Union cruised to their first NCAA championship.

Carr wasn’t impressed when I told him I grew up a BC fan.

Oh, okay that’s too bad. We only beat them twice. -Carr

Not only did Carr beat BC (pre-Tuch) in the semi-finals, but Union blew out the Minnesota Golden Gophers (post-Haula and Schmidt) 7-4 in the Frozen Four championship game. I’d say he’s earned the right to chirp in the locker room.

A poor 3rd period power play and an overplay on the OT PK doomed the Golden Knights last night. Both coaches talked about it after the game... https://sinbin.vegas/special-teams-cost-vegas-in-new-jersey/