Daniel Carr Fits The Mold Of A Golden Knight

The Golden Knights were built on opportunity. Just about every player on the roster that won the Western Conference saw an increase in time on ice, a bump in the depth chart, and boost in responsibility. Now, as we head into the second season roles are much more defined, but that doesn’t mean there aren’t still diamond-in-the-rough candidates waiting to burst on to the scene and change the outlook of the team.

Everywhere he goes ask anybody about Daniel Carr, he just scores goals. You can’t really explain how he does it, but he finds a way. –Brendan Gallagher to Montreal Gazette

Daniel Carr became a Golden Knight on July 1st when he signed a one-year contract worth just over the league minimum. He’s a 26-year-old winger who has spent the last three years bouncing between the NHL and the AHL with the Montreal Canadiens organization. Following the season he was not tendered a qualifying offer thus ending his time in Montreal.

Canadian-born, Carr decided to go the American NCAA route attending Union College. As a freshman in Schenectady (it’s a city in New York. It’s just fun to say, so I had to find a way to fit it in), he scored 20 goals in 40 games. He followed that up with 20, 16, and 22 goals and 122 points in the remaining 120 games of his college career.

Where we have to have success is in the same areas. I think we’re different in some ways but, obviously, very similar in the fact we’re not the most overly-gifted, skill guys on the ice, but we have to compete. -Gallagher 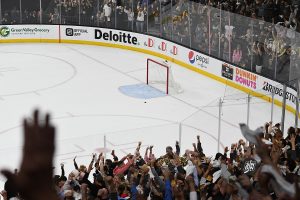 Carr went undrafted multiple times and eventually signed an entry-level deal with the Canadiens. In 139 AHL games, he’s scored 51 goals and put up 90 points, but in the NHL he’s scored just 14 goals in 94 games.

That’s because, like many other Golden Knights prior to coming to Vegas, he was buried down the Canadiens depth chart. Carr is not the fastest skater, he doesn’t have the best hands, and he’s not really elite in any area of the game, but in his non-NHL career, he’s always found a way to put the puck in the net. Last year, after being called up by Montreal he went on a five-game point streak in which he scored two goals and tallied five assists. In those five games, he didn’t see the ice for more than 12:32 in any of them.

I pretty much spent the entire season last year on the fourth line, and I learned the little things you have to change in that role. –Carr to The Athletic

If Carr ends up making the Golden Knights NHL roster, that won’t be his role in Vegas. Instead, he’ll likely be on a line with players like Alex Tuch, Tomas Tatar, Erik Haula, and possibly even Paul Stastny.

It’s all hockey instincts with him. He’s smart with the puck and he finds ways to be around the net and put it in. -Gallagher

Daniel Carr is a Golden Misfit waiting to happen. His story sounds like William Karlsson’s, Erik Haula’s, and Ryan Carpenter’s. Now, he just needs to beat out the other misfits in waiting, Tomas Hyka, Curtis McKenzie, Alex Gallant, and Brooks Macek. One of this group needs to step up and my money’s on Carr to be that guy.

(That is until I write articles on the other guys and learn more about their stories.)