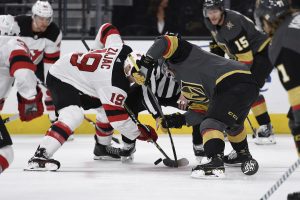 A former NHL player told us it’s easy for top teams to get comfortable at this time of year. He said it’s really easy to feel that way when a team is leading their division by double digits. The cushion effect theory certainly seemed to be coming true over the last handful of Vegas games.

On March 13th, the Golden Knights lead the Pacific Division by 12 points. Before puck drop on Sunday, VGK’s lead was cut in half.

We weren’t happy with the way we played over the last couple weeks. We had some real good games in there. We had some games where I thought we played okay and lost… I thought tonight’s game was really important. -Gerard Gallant after the game Sunday

That was All Star head coach Gallant after his squad woke up from their slumber. Prior to the game, the word of choice was urgency.

We brought up the idea of the standings cushion being a possible reason for the lapse. Gallant was on board.

I understand it. You look at the standings and say ‘you know what, we’re in a good spot right now’ but we got to look past that and get ready for every game. I think if every player can pick up his game two percent that’s all we need. -Gallant

After their microscopic rut, the Golden Knights are back on track but one win against the Sharks and that cushion would be back to 10. Not saying we want them them lose game in the near future, just after seeing the way they responded when the urgency returned to the game last night, maybe it wouldn’t be the worst thing if San Jose keeps breathing down the Golden Knights’ necks from here til April.

Neither Nolan Patrick nor Alec Martinez are currently on IR.

@SinBinVegas I remember the power play looking punchless in the bubble the back half of the Canucks series and against the Stars. What were the stats against Vancouver and Dallas?

@SinBinVegas Can you track deboer and power play futility, esp playoffs? I lived in SJ, and he had poor PP performance in the playoffs as I recall...