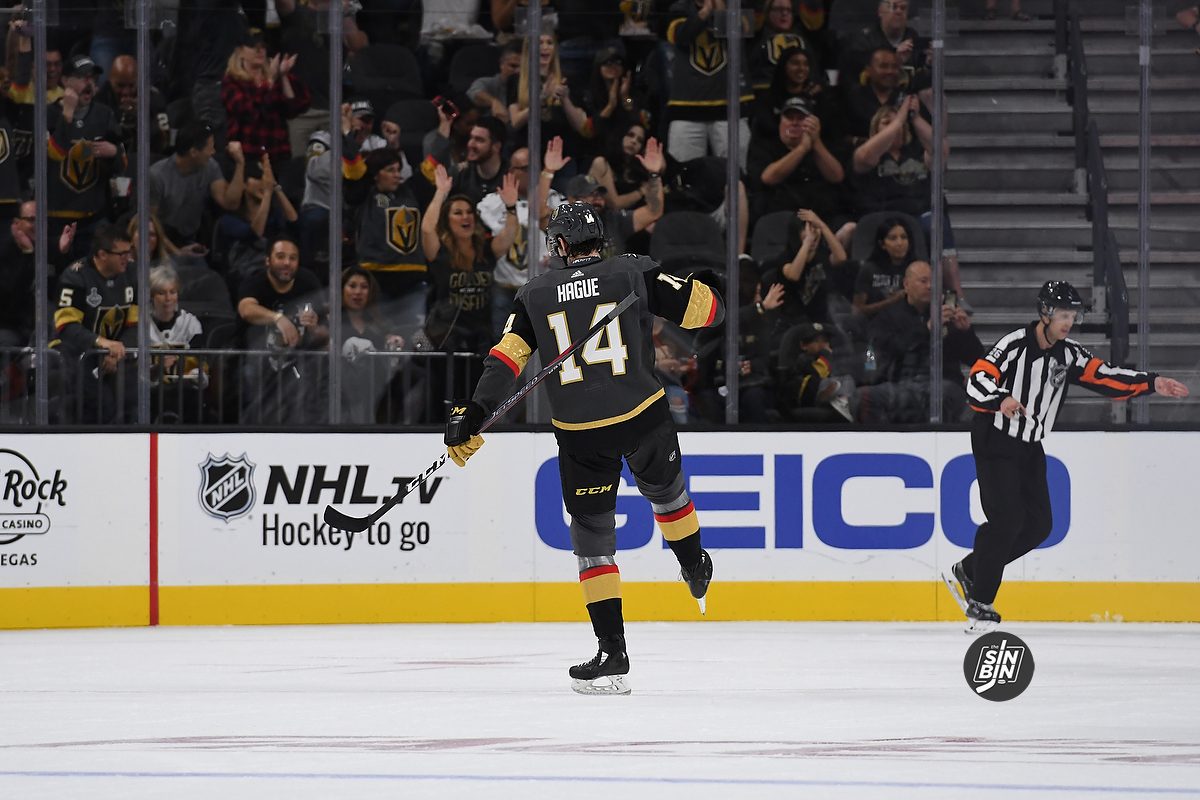 It still feels like Hague has a bit of ground to make up on Brannstrom, but there’s plenty of time to do it and the roster spot is open for someone to take. (Photo Credit: SinBin.vegas Photographer Brandon Andreasen)

With just under two weeks left before Opening Night, the Golden Knights still have three young defensemen still in camp competing for a spot on the roster.

Erik Brannstrom, Nic Hague, and Jake Bischoff have distanced themselves from the pack and with Nate Schmidt suspended and Shea Theodore likely to miss the start of the season, it appears a roster spot or two is open for a rookie.

Brannstrom will play in his fourth consecutive preseason game paired with veteran Nick Holden tonight. Hague and Bishoff will each play in their third, paired with each other in all three.

Jack Adams winner Gerard Gallant was asked in today’s press conference if he and the organization prefer to have a player playing in the AHL rather than a healthy scratch on the NHL roster. He essentially passed on that question saying it’s George McPhee’s decision but did offer something of note when pressed further.

It’s always been we’re taking our best players. It’s not like the situation we had last year, if that’s what your trying to get to, it’s not like that situation, we want to win it’s a completely different scenario than it was last year. -Gerard Gallant

Last year the Golden Knights were expected to be among the worst teams in the NHL, and they were managed that way as well. Rather than risk losing a player on waivers, they sent Alex Tuch and Shea Theodore to the AHL to start out the season. There was also the Vadim Shipachyov situation. It ended up resulting in Jason Garrison and Griffin Reinhart on the opening night roster.

This year, however, especially with Schmidt and Theodore missing, there’s a different feeling to how the initial roster will be constructed. At this point, it seems inevitable that at least one of Brannstrom, Hague or Bischoff will make the team.

The leader appears to be Brannstrom, but Hague has been electric on the power play, and Bischoff appears to be the most responsible of the bunch. There are still four preseason games and about a week of practices left for McPhee, Gallant, and company to make the call, but you can pretty much go to the bank with the idea that there will be a rookie defenseman on the roster come October 4th.

(Unless Shea Theodore signs and returns to camp between now and then.)