Are you aware of your Corsi and Fenwick numbers? -SinBin.vegas

Not really. I’ve heard a little bit about them. Am I good or bad? -Miller

Oh nice, well that’s good. I just try to get the shots through as often as I can. -Miller

You know with Corsi they don’t even need to get through. -SinBin.vegas

Oh, good, so I can just rip em at the glass? -Miller 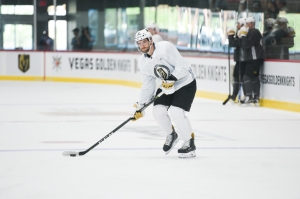 (If you don’t remember what in the hell these numbers mean, go back and read our Advanced Stats for VGK Dummies article on Corsi For %.)

Miller is however fully aware of the style of game he plays. He doesn’t need an advanced stat measuring shot attempts to prove himself. Vegas knows his skill and will need Miller’s offensive involvement this season and beyond. We asked the 24-year-old if he thought his role would expand with the Golden Knights.

I hope so. I think it’ll be more here than what they did in Boston. I think the mobility of the D here is a little more than in Boston. Yeah, we’ll definitely try and jump in the play. -Miller

It was crystal clear during Tuesday night’s game, Miller won’t hesitate to extend plays and pinch the offensive zone. In Colorado, the Vegas defenseman played 4:49 power-play minutes. You can read into preseason numbers or not, but it’s a good guess Vegas will give Miller plenty of offensive opportunities. As long as, the referees swallow their whistles.

It was tough, there were a lot called in that game. But it seems like most of the preseason games have had a lot of penalties. They’re really trying to crack down. I’ve never seen this many. -Miller

Miller has the night off and will watch… I mean…listen to the game, like the rest of us. Luca Sbisa is the only defenseman traveling to San Jose, that also played in Tuesday. Look for Shea Theodore and Nate Schmidt to create chances from the point. Don’t worry, there should be enough defensive mobility for the Golden Knights tonight. But anyone is mobile compared to Zdeno Chara, right Colin?