Just how reliable is Golden Knights center Cody Eakin? Is winning 79% of his faceoffs reliable enough for you?

Cody is a veteran player and I think that he can do very well for us. He’s definitely going to be one of our top center men for us in the faceoff circle. He’s an important player and we just want to give him confidence and keep going in this game. -Gerard Gallant 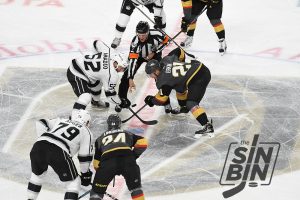 Bet you Eakin won this one too. (Photo Credit: SinBin.vegas Photographer Brandon Andreasen)

I could argue he was the biggest takeaway, and maybe even the best player on the ice, from last night’s 4-2 loss. Eakin saw a total of 20:06 minutes on the ice, and 9:12 of that was on special teams.

Last night, Eakin’s impact was felt in both zones. Offensively, the center was +1 with a beautiful assist on the Theodore goal and played 6:12 of PP. Defensively, Eakin led the team with three takeaways, and played 3:00 on the Enough Said Call Ed penalty kill.

I don’t think Cody played a lot of power play time in Dallas, but he’s going to get some of that with us. He’s definitely going to be one of our top four guys going out on the penalty kill all the time. -Gallant

It’s clear Gallant considers Eakin a player he can rely on. He sent out #21 for twenty-four shifts last night, and had him take several situational draws.You want to be in those situations, and start with the puck as much as you can. You want to start with the puck offensively and defensively, power play and penalty kill. I’m in a lot of opportunities right now, so it’s my job to win [faceoffs]. -Cody Eakin

So, how does Eakin succeed in tight or desperate situations?

I’m more dominant on my left-side when I’m going well with draws. It depends on who you’re taking them against and what hand he is, what side of the ice. -Eakin

Winning 15 of 19 faceoff draws is a value to any coach. Which is why Gallant called Eakin one of his top centers. Without him, the Golden Knights were 18 of 42 draws. No wonder why Gallant loves him so much.