Look around, you won’t find a harsher critic of Cody Eakin’s play since he’s joined the Golden Knights than me, but since Reilly Smith has been out with the wrist injury, Eakin has proven his value to a playoff team in a huge way on the penalty kill. 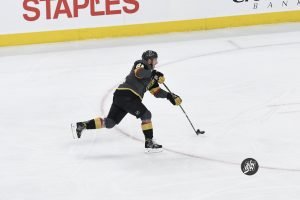 We always knew #21 was good on the PK, but he’s been on another level for a little while now. (Photo Credit: SinBin.vegas Photographer Brandon Andreasen)

When the Golden Knights are fully healthy, they use six penalty killers, but like the forward lines and defensive pairings, they are not used equally. Since early in the year, All Star head coach Gerard Gallant has relied upon a pair Pierre-Edouard Bellemare and Tomas Nosek and another pair of Reilly Smith and William Karlsson to handle most of the load. Cody Eakin has consistently been the next man up to fill in for any of those four who are missing or to play with someone like Ryan Carpenter, Oscar Lindberg, or Erik Haula to round out the six.

In the absence of Smith, Eakin has been tremendous killing penalties with William Karlsson. Last night alone he sprung Karlsson for a shorthanded goal and earlier in the game he took on two defensemen and nearly scored shorthanded himself. There are countless other examples over the past three weeks as well. Simply put, Cody Eakin has looked like the best player on the ice when Vegas is down a man for nearly a month now.

As we head towards the playoffs, I’m suggesting Gallant utilizes Eakin as his top penalty killer with Karlsson or Smith, instead of moving him down the ranks and putting even more responsibility on two of the Golden Knights’ most important offensive weapons, 19 and 71.

Cody and Reilly are pretty similar (when killing penalties). They are both fast, they think the same, yeah, it works for me. -William Karlsson

Plus, without asking, Karlsson brought up another strong argument for Eakin.

The good thing about Eaks is he’s pretty good at faceoffs so I don’t have to take them. -Karlsson

The main concern penalty kills bring in the playoffs is the likelihood of injury. The Golden Knights balance is the key to the team, but an upset of that balance could be devastating. With most teams, there are a few stars that everyone targets as “if this guy stays healthy they’ll be okay,” with the Golden Knights there are about eight of them and many play when the Golden Knights are shorthanded. Limiting Smith and/or Karlsson’s shorthanded minutes limits their exposure to potentially dangerous situations.

Plus, Gallant likes to roll lines and keep players fresh, which has been valuable all year. It will become even more so in a seven-game series likely with multiple periods of overtime. To win in the playoffs, Vegas will need Karlsson and Smith to score, and for them to have the best chance to do so, they’ll need to be fresh, and more importantly, healthy.

Eakin’s even-strength role can be replaced by players like Carpenter or Lindberg, but what he does as a penalty killer cannot, and Gallant knows it.

But why a different unit, Turk? There are nothing but benefits to leaving Eakin in the top role with Karlsson.

I once joked to Gallant that he should “read my article,” this time it’s not a joke, I really hope he sees this and considers it moving forward.