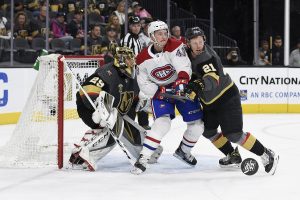 There’s not many of us out there, but the Cody Eakin apologists are accepting more members after his spectacular two goal night. We’ve heard it all season long, Eakin makes too many mistakes, at times he’s out of position, and he can’t finish offensively. It’s what a lot of bottom line players hear from fans. Being a third-line center is a thankless job. Which is why fans need to realize they have a pretty good one in Eakin.

Eakin leads the Golden Knights with a 52.5% faceoff win percentage (150 faceoff minimum) and 424 faceoff wins. He’s tied for third with 51 takeaways, and is 12th on the team with 24 giveaways. While 23 points might not seem much to fans, Eakin is close to his career average. He’s creating .35 points per game, and his career average is .39 PPG.

Eakin is right in the juicy middle with 23 points. Johnson, Henrique, and Brassard are on teams with really strong depth down the middle. They’re not third-line centers on any other team, which makes Eakin’s 23 points better than average.

One of Eakin’s best attributes is his work on the faceoff dot. He is one of the leaders in FO% amongst depth centers. If that isn’t impressive enough, Eakin leads all comparable third-line centers with 51 takeaways.

Coaches set their lineups based on more than just the score sheet. All Star head coach Gerard Gallant plays Eakin almost 15 minutes per game expecting the center to perform his role. Winning face offs, killing penalties, pressuring defenses and occasionally scoring is Eakin’s gameday assignment. Which is why he’s a lock to be in the lineup every night. Gallant trusts and believes in his third-line center.

And it paid off in Detroit.