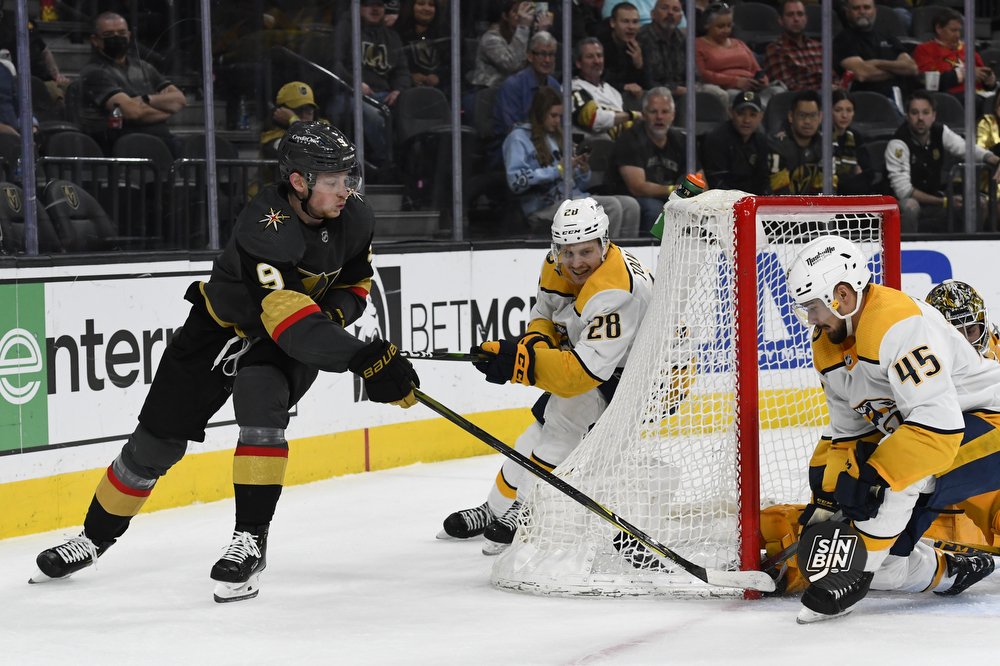 Heading into the offseason, 10 months ago, the Golden Knights had one area they really wanted to clean up.

The obvious one is the power play, that’s at the top of the list to fix. For me the power play isn’t a this year problem. I didn’t feel it was dangerous enough in the Bubble, I thought it was mediocre. At the most important time in the Bubble as we went through to the Dallas series it got cold at the wrong time. We shuffled some things, put a new set of eyes on it this year and it stumbled again. That’s going to be the priority moving forward. -Pete DeBoer in June 2021

The front office felt the same way and they got to work instantly as the new league year opened.

Evgenii Dadonov was a player we identified as a priority. We had him ahead of all players that were available in Expansion. That effectively addressed the need of adding one good foward. -Kelly McCrimmon in July 2021

To start the season, DeBoer urged fans and media to be patient with the power play, calling it a work in progress and even going as far as to dissuade questions until we see it for a full season.

Vegas started the season 0 for 19 on the power play and the concerns grew larger and larger.

Again, the front office did not sit and wait for it to fix itself, instead, they went out and made yet another blockbuster trade, acquiring superstar Jack Eichel. Of course, though, he was injured, so once again, patience was required.

From the moment Eichel was acquired to the night he stepped foot on the ice for the first time as a Golden Knight, the VGK power play was actually fairly decent. They scored on 24 of 106 opportunities, or 22.6% which is equal to Carolina who sits in 10th in the league.

But, throughout it, the droughts still continued from time to time, and even during the hottest period, we went back and looked at every goal and declared the success unsustainable.

Eichel’s time came in mid-February and it was anything but the insta-fix it that was expected. In Eichel’s first eight games as a Golden Knight, the power play went a miserable 1 for 19. It caught fire over the next few weeks, operating at nearly 27% and scoring at least one in seven games of an 11 game stretch.

Naturally, it did not last. Vegas’ last power play goal came eight games ago against the Predators as they’ve failed to convert on 18 in a row since.

On March 9th, the Golden Knights made an apparent switch in power play coaches. Steve Spott, who had been overseeing the power play since DeBoer was hired took a step back and Ryan Craig began running drills in practice. That has continued since.

The way our staff works everybody works everywhere. Sometimes we switch voices and messaging at different points to grab attention back, especially when you’re 60 games into a season. -DeBoer in March 2022

Then there was last night as for the first time ever the Golden Knights had Eichel, Dadonov, Mark Stone, and Max Pacioretty all available and on the same unit. Even with the immense talent, the unit looked similar to what Golden Knights fans have grown accustomed to seeing over the past three seasons.

In three power plays last night, the Golden Knights generated just seven shot attempts, two of which were blocked, three more missed the net, and just two made it to Thatcher Demko. Vegas was not credited with a single high-danger scoring opportunity in six minutes of power play time per NaturalStatTrick.com.

Now, of course, there are plenty of excuses that can still be made. From injuries to chemistry to timing, the Golden Knights have not gotten a true season of power play work under their belts.

However, at some point, enough must be enough, and it seems we’ve reached that point.

You can’t lose the special teams battle and expect to win any game so that’s probably the first place we’ve got to clean up. -DeBoer after yesterday’s game

There are just eight games left in the season and the Golden Knights are in dire straights. There’s no more time to wait. It has to happen now, literally starting tomorrow in Calgary.

Otherwise, every step of the process in fixing it has to be evaluated, re-evaluated, and then evaluated again.

As DeBoer said at the end of the last season “it isn’t a this year problem.” It’s now become a this year, last year, and the year before that problem, and unless it looks drastically different in the final eight games and saves the Golden Knights’ season, the overhaul must be considered a complete failure.