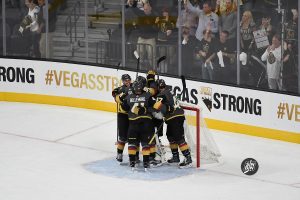 We’re going to take it one game at a time. Like I said, right now things are going well. We’re playing well and we’re playing against some good teams and winning. The more we win the more compliments we’re going to get. Like I said, we’re not going to get ahead of ourselves. A great start, obviously, but it’s a long year. The guys have got to work hard. They’ve got to compete every night and play every night. If we don’t do what we did tonight for the most part of the season, then we’re not going to win. I like our group. They’re working hard and we’ll see what happens. -Gerard Gallant

Gallant sounds more like a coach that’s packing for an upcoming six-game road trip, than a coach enjoying his 7-1-0 record.

The Blackhawks’ royalty came forward to praise the Golden Knights after the game. We’re talking about three guys (Quenneville, Seabrook, Toews) with three Stanley Cup rings each. They’ve played against every team, every coach, and every style. Their opinions matter.

I’ll tell you one thing, Chicago may have been happy to answer my fluffy questions but they weren’t happy about the loss. We should expect a tighter game on February 13th when Chicago comes back. C’mon Vegas fans, can we please hang on to at least a few of those tickets.