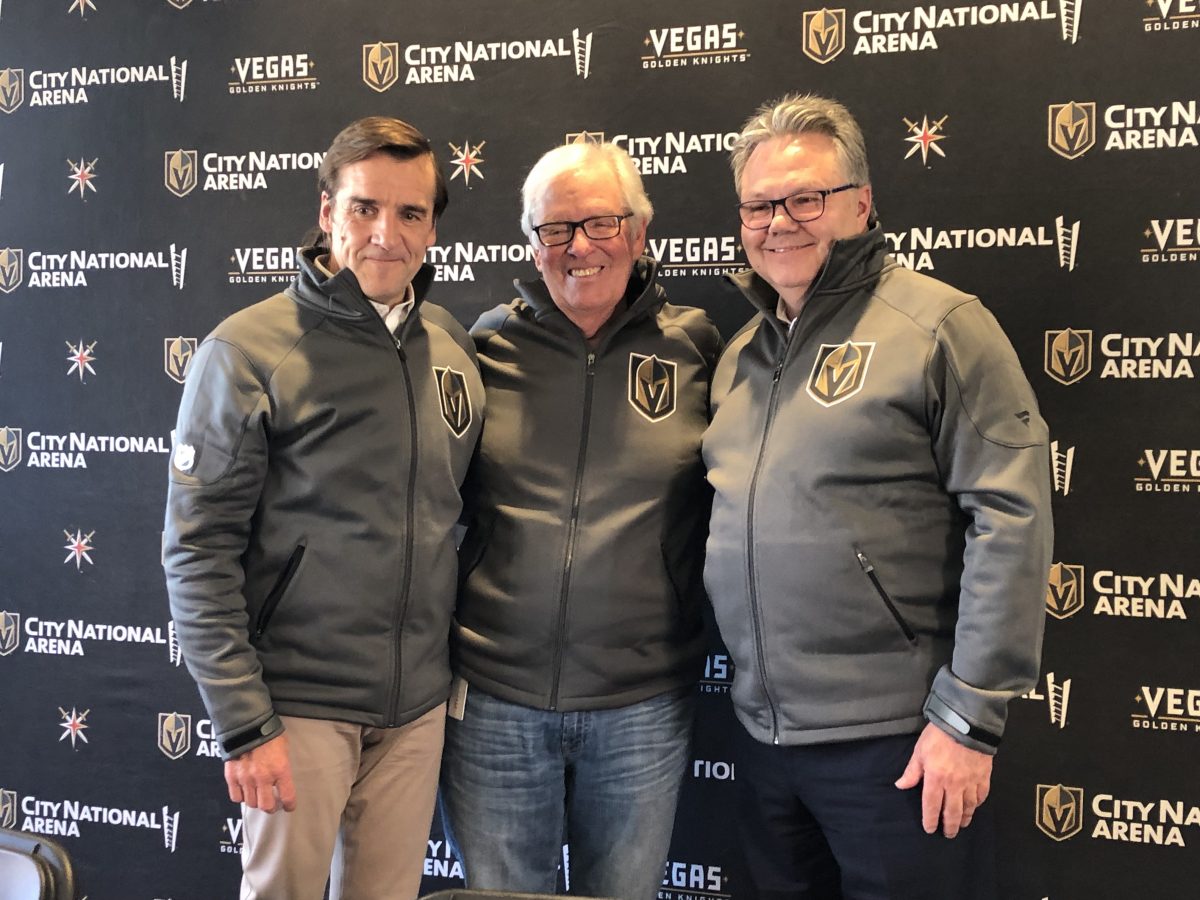 It was August of 2016 in an airport in Vienna, Austria that Vegas Golden Knights General Manager George McPhee first met Kelly McCrimmon.

Both on their way to the Ivan Hlinka prospects tournament in Slovakia, the two met for the first time and eventually formed a partnership that would take the NHL by storm.

It’s the best working relationship I’ve had in this business. -George McPhee

On that day McPhee began the process of courting then owner, general manager, and head coach of the WHL’s Brandon Wheat Kings, Kelly McCrimmon, to become his “assistant.”

I told Kelly when I was trying to hire him that he was going to be involved in every single thing we do here. -McPhee

McCrimmon took the job, officially titled “Assistant General Manager” and the two immediately got to work.

However, it was never really a situation with a first and second in command. Instead, McPhee quickly turned over half of his responsibilities, making the relationship much more of an equal partnership. It literally happened days after McCrimmon took the job.

Quite frankly, since the moment he started, Kelly was the general manager of the Golden Knights in relation to those 15 teams, but in reality, it was much more than just half the league.

The thing that’s special about our organization and our relationship is just the collaboration. -McCrimmon

That has continued ever since.

Literally however insignificant a move we’ve made, it has never ever been someone overruling the other. -McCrimmon

We haven’t disagreed on anything. For two guys who didn’t know each other, to get together and see things the way we see them, it’s just been a real treat to work together and I think we’ve been good and we’re going to keep doing it the same way. -McPhee

That’s why, when McCrimmon’s name started popping up as a prime candidate for open GM positions in Edmonton and Seattle, McPhee knew he couldn’t let his “co-manager” leave. So, he had to come up with a solution.

The only thing missing was the official title, one the Golden Knights bestowed on him, plus a nice new contract, today.

It was important to me, if we could figure how to do it, to make sure this group is together. This was George’s idea to evolve our team and our group in the way that it’s evolved. -The Creator

I’ve thought about this change for the last three or four weeks, how we could keep things together here. I spoke to Kelly for the first time about it on Friday. I met with Bill early Saturday morning.

What was important for me was that there were no disruptions to our staff. We worked so hard three years ago for an entire year to put this great staff together. Now, we are only two years old and we’ve got organizations that are 25, 50, 75, 100 years old that are coming and wanting to talk to our employees. We’d rather keep the band together. -McPhee

The decision wasn’t terribly difficult on McCrimmon either. When presented with the options of creating a new organization in which he had complete control, or stay with the one he’s currently with, he thought about what his new team might look like, and quickly realized, why re-invent the wheel?

If I went into a new opportunity and I did my job well, I would try and do exactly what we are doing here. I wouldn’t want it any other way. -McCrimmon

So, the only question that remains, and one you probably already know the answer to, what do the Golden Knights look like with Kelly McCrimmon as the General Manager and George McPhee as the President of Hockey Operations?

So in the end, not much will change except for the words after each guy’s name on their business cards, and probably a couple of extra bucks in the pocket of McCrimmon. The Golden Knights are still the Golden Knights and the plan of creating a dynasty will just keep on plugging.

We’re here and we’re going to be here for a while. -McPhee

For the Golden Knights, it doesn’t get much better than that.