Chandler Stephenson Add Is All About Depth 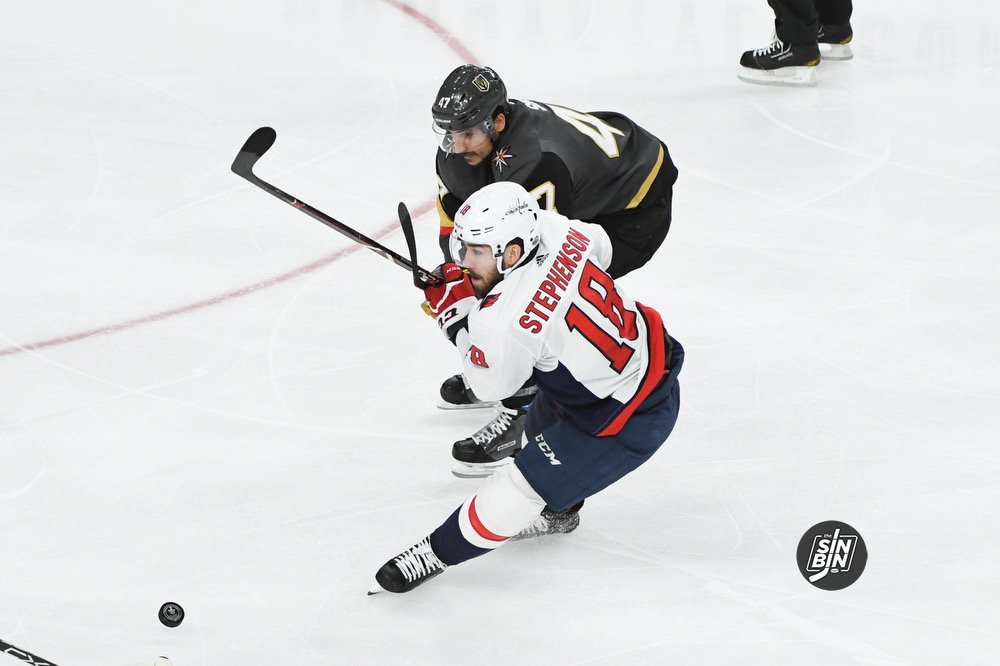 Last night the Golden Knights shipped out a 2021 5th round pick to add 25-year-old center Chandler Stephenson from the Washington Capitals.

Stephenson is a bit of a swiss-army knife type forward who is versatile enough to play all over the lineup and in all situations. With Washington, he was primarily deployed on the fourth line, but throughout his 168 games, he saw time on all four lines including a quick stint with Alex Ovechkin on the top line.

What Stephenson is known most for is his penalty killing. In that regard, he’s close to elite.

There are 89 centers in the NHL with at least 30 minutes of penalty-killing time on ice this season, and Stephenson’s numbers are very good. He ranks first in that entire group in high danger chances allowed per 60 minutes with only 1.74. He also ranks in the top-three in the NHL in Corsi against (66.06), scoring chances allowed (31.29) and expected goals allowed (3.6) on the penalty kill. He’s 13th amongst all centers in goals against per 60 at 3.48. –Jesse Granger, The Athletic

The add isn’t just about penalty killing though.

Let me break it down group by group.

As opposed to teams of VGK’s past, this team is not loaded with centers playing wing. Most of the Golden Knights wingers, especially when Eakin is out, are natural wingers, while every center is playing center. There’s a lack of versatility that both Gallant and the front office like to have on their roster. By adding Stephenson, who has played a lot of center and a lot of wing, they get a guaranteed NHL caliber player (something Roy is not yet) who can fill in at center when needed, or play on the wing if necessary. He’s an insurance policy for three different guys. For Cody Eakin if he’s hurt for a while, for Cody Glass if he isn’t physically strong enough to play center yet, and for Nic Roy if he’s just not quite ready to be a full-time NHLer.

There are a few other options who have yet to be pulled up from the AHL (Patrick Brown and Curtis McKenzie) but the fourth line actually was starting to look thin. With Carrier up to the third, while Eakin is out, Roy had a full-time spot playing with Nosek and Reaves. Stephenson’s addition gives the Golden Knights a bit more flexibility, and the element of speed they would be missing without Carrier.

The Golden Knights have a ton of players that can penalty kill, but there’s undoubtedly a question as to how many of them you want penalty killing. Mark Stone leads all forwards in PK time, followed closely by Karlsson and Smith. That’s three of the team’s most important players playing in the most dangerous time of the game (in regards to injuries). PK time is also some of the most physically exhausting, meaning they are wearing out some of their best scoring options in an attempt to keep the other team off the board.

Stephenson allows at least one of the second line guys to come off the PK and focus their energy more on scoring.

There’s one more added benefit, and that’s in the fact that pushing Nic Roy down to the AHL should help the Chicago Wolves, who are struggling mightily. With Zykov and Roy as additions to their team, they’ve got a better shot to start winning more games.

All in all, the addition of Stephenson is about depth, everywhere. He has the ability to fill many different spots and do it at a level that’s higher than anyone else currently on the roster. With Zykov likely out of the picture, they needed another body, and this was a cheap way to get one.