I remember when the Golden Knights signed Zach Whitecloud out of college two years ago. He was an NCAA free agent, having played at Bemidji State, Brad Hunt’s alma mater.

I met him for the first time in Buffalo where he had joined the team after signing. My thoughts at the time were: “O.K., no big deal. Seems to be a nice kid. Maybe down the road he helps their defensive depth. And it didn’t cost the team anything but money.” 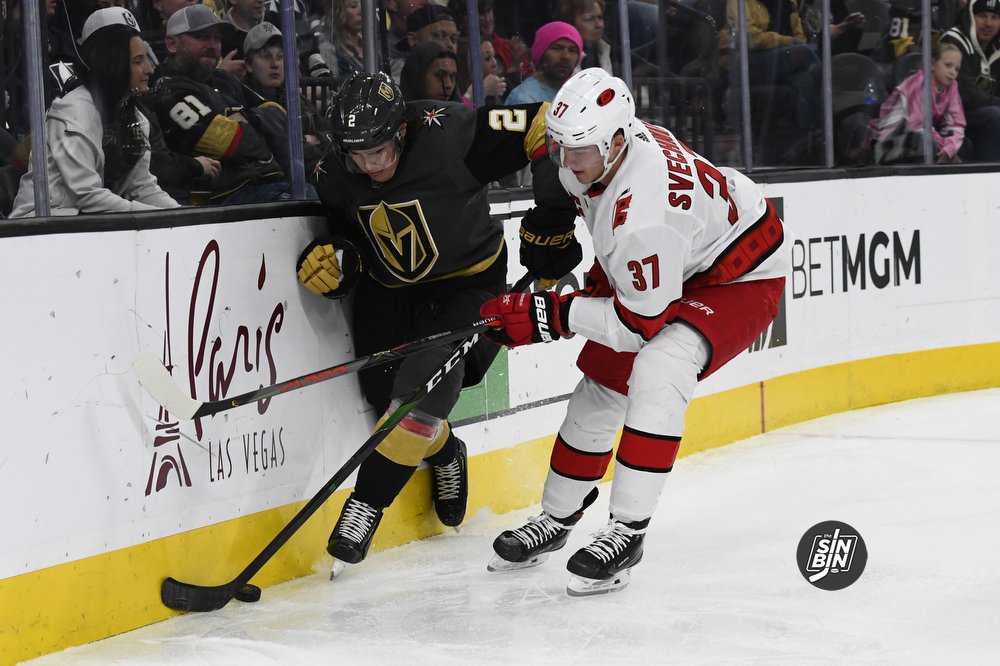 He actually got to play in an NHL game in 2018, against Edmonton late in the season. The Knights were on their way to the playoffs. They had clinched the Pacific Division. Gerard Gallant was looking to rest some guys with the postseason set to begin the following week. What harm could it do to give Whitecloud a taste of the big time?

Boy, have things changed since then.

Whitecloud has become a mainstay on the blue line. He’s playing well. Gallant is no longer his coach. Peter DeBoer is now calling the shots.

He also has beaten out fellow rookies Nic Hague, Dylan Coghlan, Jimmy Schuldt, and Jake Bischoff for a spot on the Knights’ roster.

Whitecloud has been in the VGK lineup since Feb. 1 and it looks like he’s not going anywhere. He picked up his first NHL point in Friday’s 4-2 win over the Sabres and he appears to be comfortable competing at this level.

You can chalk it up to one of those slick George McPhee moves where he got one over on his GM colleagues around the league. A small investment appears to be paying big dividends.

It’s all about keeping it simple, paying attention to detail and doing my job every night. Work hard in practice and learn from my mistakes. -Whitecloud

DeBoer has him with Nick Holden as the third D-pair and having a veteran like Holden certain helps. Whitecloud has also played with the recently acquired Alec Martinez, another veteran.

There’s a lot of communication, on and off the ice. Obviously they’ve got a lot of experience and they point out a lot of little things and they’ve made me feel very comfortable. -Whitecloud

What I like about Whitecloud’s game is the simplicity he talked about and the way he competes. He makes smart passes out of his own end, at 6-foot-2, 209 pounds, he is physically competitive, both in the corners and in front of his own net. He is averaging almost one blocked shot per game (10 blocks in 11 contests). He is on the right side of his plus-minus (+4) which is always nice. But the big thing for me is he stays out of the penalty box and doesn’t put undue stress on his team. He has just four PIM. Hague had 32 penalty minutes in the 38 games he played in the NHL this season.

Is he perfect? No. He had a bad turnover Friday which led to the first Buffalo goal. But show me a player on this roster who hasn’t coughed it up or made a bad decision that led to the other team scoring?

The biggest stat of all? The Knights are 8-2-1 with Whitecloud in the lineup (he didn’t play Feb. 13 vs. St. Louis and Feb. 20 against Tampa Bay). When you’re part of a winning situation and contributing in a positive way, that’s how you earn the coach’s trust.

And to DeBoer’s credit, he wasn’t concerned about the past as Whitecloud had spent the majority of this season in the AHL. As we’re seeing with Engelland and Merrill sitting lately, DeBoer will play the guys he thinks gives him the best chance to win. There is no loyalty factor in play here. So when he has a fresh face as Whitecloud’s and he’s executing the way DeBoer wants, of course he’s going to keep him in the lineup.

Whitecloud’s development, coupled with the acquisition of Martinez has given the Knights some important depth on the blue line. That could be a factor in the playoffs and that’s why we shouldn’t write off Engelland and/or Merrill at this point. Attrition may require their services at some point in the postseason and their experience is an important by-product of that depth.

At age 23, Whitecloud is the second-youngest player on the current Vegas roster. Only Nic Roy is younger, and that’s by just three months. And on a roster whose average age is 28.3 years old, having some youth is critical.

So there are a lot of good things going on at the moment at T-Mobile Arena. The Knights will look to make history tonight in trying for a franchise-record ninth straight win when they host the Kings. Reilly Smith, William Carrier, and Theodore are having career seasons. Max Pacioretty has bounced back from last year with 30 goals and shows no signs of letting up. William Karlsson appears to have broken out of his goal-scoring funk. Nick Cousins looks like a good fit in his brief time in a steel gray sweater.

Obviously, the injuries to Mark Stone and now, Tomas Nosek, are a concern. And we still haven’t seen Alex Tuch return to the ice. Same with Cody Glass. But the team’s depth is proving to be sustainable as they deal with the injuries. Whoever DeBoer inserts into the lineup, whether it’s Gage Quinney, Patrick Brown and yes, Whitecloud, this team isn’t missing a beat. They’re at the top of the Pacific Division with 16 games to play and with the goaltending they’re getting from Marc-Andre Fleury and now the addition of Robin Lehner, this will not be an easy team to beat down the stretch. Of those 16 remaining games, nine are against Pacific opponents and Vegas is 13-5-2 in division play.

March is going to go by quickly. The Knights haven’t clinched anything yet. But when you see what they’ve been doing of late and what can be once they get everyone back, it could make for an exciting April, perhaps a thrilling May, and, dare we say it, an historic June?