As is my morning habit, I check the NHL standings online at NHL.com to see who’s doing what.

So how did Vegas get to this lofty spot?

There are several factors involved. Let’s look at them:

Make no mistake about it. The move a few weeks ago to go from playing man-to-man to zone coverage by the team’s blue line corps has resulted in much better play, both individually and as a group.

They’re also not backing up in their own end and allowing opponents to get Grade-A scoring chances. They’re winning more one-on-one battles and with the forwards doing a better job of coming back and supporting them, the Knights are transitioning out of their own end much better.

Individually, the change has had a profound impact. Deryk Engelland was struggling earlier in the year and even I thought it would be smart to sit him to save him for later in the season. But he has adjusted nicely and now, you can’t get him out of the lineup.

Engelland is skating much better, probably because he’s exerting less energy chasing opponents all over the ice. He’s being more assertive offensively. He has been getting pucks to the net with his wrist shot, something in his repertoire which is underrated, and that’s creating rebound chances for the forwards.

And he’s back to having a little bite to his game. He has been more physical and more ornery, kind of like the Engelland I remember back in his ECHL days with the Wranglers. 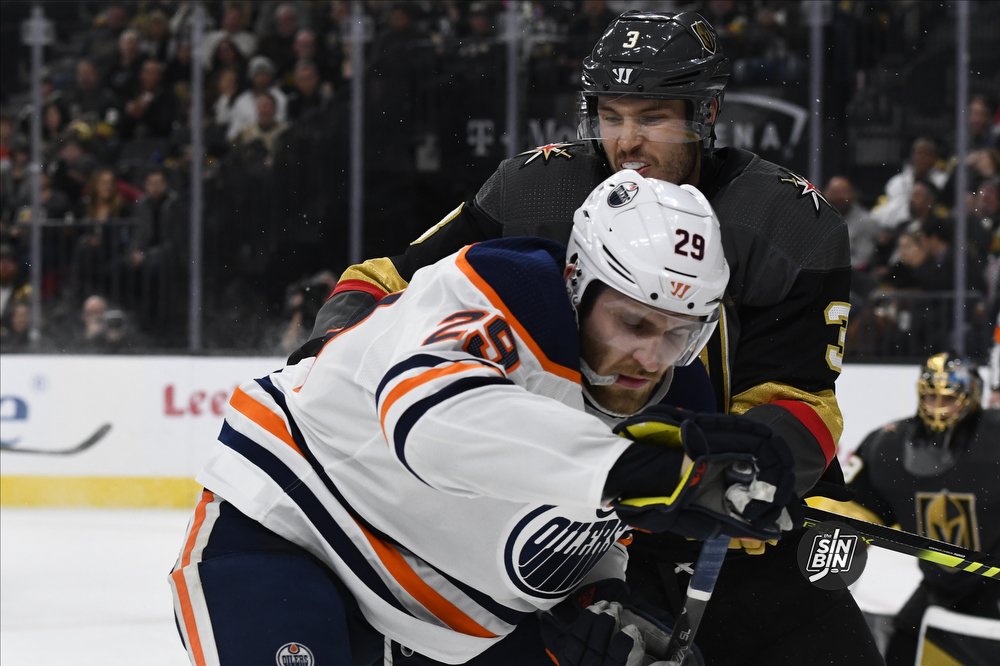 Brayden McNabb was also struggling early on, probably in part to not having his regular partner on the ice with him as Nate Schmidt was out with a knee injury. But Schmidt has been back for a while and the duo are in sync once again. Like Engelland, McNabb has benefitted from the system and he has been back to his steady and reliable self.

Nic Hague is starting to figure things out at the NHL level and I like the way he uses his long reach effectively and handles the puck in his own end. He’s making better decisions with the puck and while he still gets caught out of position occasionally, he seems to be working well with Shea Theodore.

The other Nick — Holden — had sat for a while. But since Gerard Gallant recently put him back in the lineup, he has done a solid job. Overall, the D corps has had a renaissance the last several weeks as they’ve figured out how to perform within the tweaks to the system.

Yes, they’ll turn the puck over from time to time, make a bad pinch or simply get beat by a good play by the other side. Overall, though, the defense has played markedly better of late.

As I wrote last week, the acquisition of Chandler Stephenson is looking like a winner for George McPhee and Kelly McCrimmon.

Not only is Stephenson fitting in, he’s contributing offensively with three goals and five points since he joined the team on Dec. 2. He’s already exceeded his offensive output with Washington this season prior to the trade (three points).

Against Vancouver Thursday, Stephenson had over 17 minutes of ice time, the most since becoming a member of the Knights. That shows the trust Gallant has in him.

He’s also making his linemates better. Both Max Pacioretty and Mark Stone have six-game point streaks since Stephenson joined them on Vegas’ second line and they show no signs of slowing down.

They’re a hard line to play against. Stephenson’s speed opens up the ice for Stone and Pacioretty and the wingers are getting quality chances every night. Plus, they are two of the hardest shooters in the NHL and that puts added pressure on opposing goaltenders.

Let’s talk about Pacioretty for a moment.

The team’s leading scorer with 15 goals and 36 points looks comfortable and confident. He is healthy and playing with energy every shift.

That wasn’t the case last year. It took some time to adjust to his new environs. He was dealing with injuries and I’m not sure he was totally in sync.

But the guy can play and unlike in Montreal where he carried the heavy burden of captaining an underachieving team, here, he just goes out and plays and the results have been impressive.

He’s also a standup guy, which is what you would expect from someone who has worn the “C” on his sweater.

Malcolm Subban’s play over the last month has shown the Knights don’t need to find a backup to Marc-Andre Fleury. The question is, how often should Subban be playing?

I’d like to see him start back-to-backs and perhaps play both ends, depending on the opponent.

It’s been said a million times, you can’t play Fleury 65 games and expect to ride him in the playoffs. Subban’s earned his teammates respect and trust. He should play more often.

Frankly, I would’ve liked to have seen him play Thursday vs. the Canucks. His father Carl was in the stands at Rogers Arena and I’m sure it would’ve inspired Malcolm to put forth a great effort.

And while Fleury was no doubt motivated to play well for his late father who died last month and with the other Golden Knights’ dads on the trip, he didn’t have his best game in Vancouver.

Still, Fleury remains the main man and his next win will tie him with Curtis Joseph for No. 6 on the NHL’s all-time goalies’ win list at 454. It will be another milestone in his Hall of Fame career.

Bottom line: The Knights are in good shape in net.

A few other factors to consider in Vegas’ rise to the top of the ledger in the Pacific: The team has managed to survive the loss of centers Cody Eakin and Cody Glass. The play of the first line of William Karlsson, Reilly Smith and Jonathan Marchessault continues to be strong. The special teams are performing well.

I’d like to see Alex Tuch get going offensively. He’s pointless in his last five and has just one assist over his last seven contests.

Paul Stastny can also use an offensive boost. Tuch’s linemate has just two assists in his last 11 games and hasn’t scored since Nov. 27.

This is still a very competitive division. Besides the Oilers and the Coyotes, Calgary is very much in the picture for the race to the top and Vancouver is capable of a run. The Sharks are retooling under Bob Boughner and don’t count San Jose out.

My advice to the Knights? Keep your foot on the gas. As the great Satchel Paige once said: “Don’t look back. Something might be gaining on you.”

I just want to take moment to thank all of you for reading and wish you a Merry Christmas, a Happy Hanukkah or Kwanza and hope that you’ll take a moment during the holiday season to reflect on how fortunate we all are to have a team to embrace and be part of our community, a community that opens its hearts to each other and has shown a resiliency to evil and has proven that love triumphs over all.

I’m proud to be part of the SinBin team and I’m grateful to Ken and Jason for allowing me to express my views and to attorney Jim Jimmerson and his firm for sponsoring this space.