When Gerard Gallant decided recently that he needed to shake up his lines in order to snap the Golden Knights out of their collective funk during a five-game losing streak, I understood where he was coming from.

Sometimes a change of playing partners gets a player going. Your game becomes more focused out of necessity because your comfort level with your linemates hasn’t been established.

Moving Cody Eakin up to the second line to play with Jonathan Marchessault and Mark Stone, dropping Paul Stastny down to the third line, playing Max Pacioretty with William Karlsson and Reilly Smith and having Shea Theodore share the blue line with rookie Nic Hague seemed extreme on the surface and you may have thought it smacked of desperation on Gallant’s part. 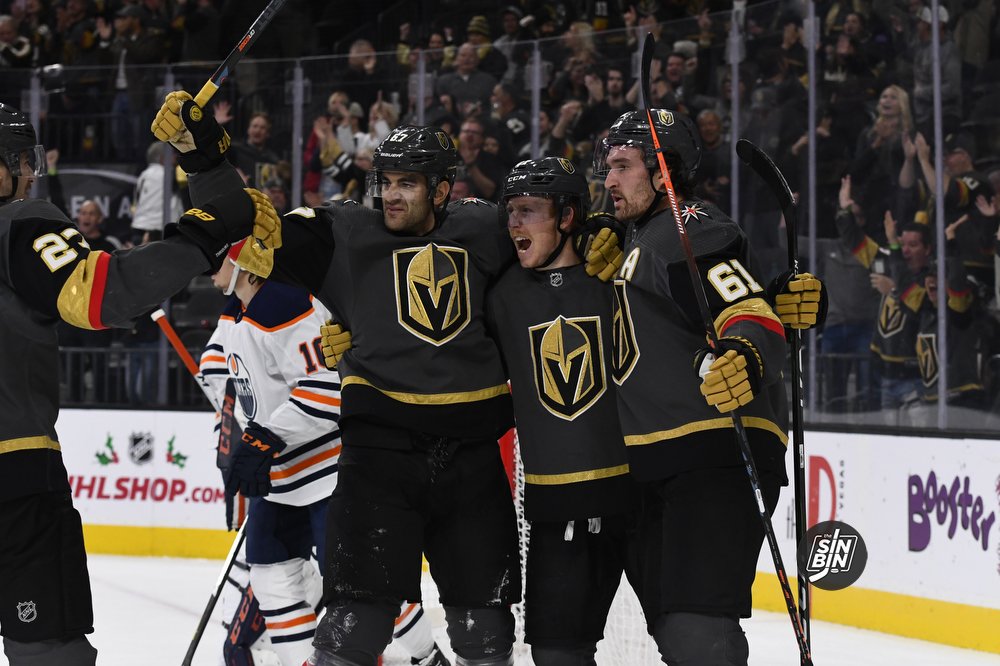 But the moves did reap some dividends. Eakin woke up from his season-long funk with a couple of goals. Stone also regained his scoring touch briefly. Pacioretty continued his high-level play and seemed to work well with Karlsson.

The Knights opened a four-game homestand with a pair of wins over Calgary and Toronto, though Marc-Andre Fleury needed to bail them out in both wins with spectacular third-period saves to snap the five-game losing streak. They played well enough to beat San Jose but once again came up short in the 3-on-3 overtime, an issue that needs to be addressed sooner than later.

However, there was a common thread to those three games: the Knights played with purpose and with effort and they came away with points on each occasion.

Such was not the case Saturday night at T-Mobile Arena.

In a game where Vegas needed to bring it, the Knights allowed the Edmonton Oilers to dictate the terms on the ice and it resulted in a 4-2 loss built around a lackluster effort throughout the lineup.

Gallant was none too happy about it afterward and you shouldn’t be happy either. This was a four-point game against the division leader. You were at home. Your crowd was engaged, as always, and this is what happens?

Well it starts with effort. The biggest thing is effort, then the execution works. So, the execution wasn’t there tonight, I agree 100 percent, but it’s got to start with competing and battling and winning those battles and playing to get your nose dirty a little bit. And it’s not all the guys, it’s some guys. We’ve got to get more of a team game. -Gallant

There’s no excuse for being outworked and the players own this L. Even Fleury, as brilliant as he has been of late, let in a soft goal in the first period as he allowed Ethan Bear’s shot from inside the right circle elude him, a shot he saw all the way but simply whiffed on.

But in terms of looking for culprits, Fleury is pretty far down the list. Few players gave 100 percent for 60 minutes (William Carrier comes to mind as one who did) and as NHL coaches love to say, when you have too many passengers, you’re doomed to fail.

Let’s get back to Gallant for a moment. He knew he had to shake things up for more than a single period during the team’s losing streak. Now, with the Knights having dropped two straight and a difficult stretch coming up beginning tomorrow night in Dallas against the suddenly hot Stars, could the blender be switched back on?

We caught a glimpse of what could be coming in the third period Saturday when Paul Stastny suddenly found himself centering the fourth line and Carrier got promoted to the third line.

For two years I’ve pretty much kept the lines together and when things weren’t going well it’s fun once in a while to change things up. I think the players think the same way, I really do. Will they get back together sometime, yeah they probably will. But we’ll let it ride for a while and see how things go. -Gallant

Those moves aren’t done lightly. There are implications whenever a coach changes his lineup. Motivation. Confidence. Comfortability. All come into play when someone finds himself in a new situation.

In Eakin’s case, they appear to have helped. He scored the first of the two Vegas goals Saturday against the Oilers and he continues to work hard to maintain Gallant’s trust. No. 21 now has three goals in his last four and his three tallies are just two behind Marchessault, who is supposed to be one of the Knights’ star goal-scorers.

But what about the other moves? Saturday, Gallant returned Marchessault to his regular spot with Karlsson and Reilly Smith, who incidentally has grown a funk of his own, having gone goal-less in seven straight. Putting the band back together didn’t work out so well as the trio were kept off the scoresheet.

So what goes into Gallant’s thought process? Does he rely on analytics? Does he go with his gut? Does George McPhee send him a text telling him who to play?

We look at it and we get great information but for us it’s about how the lines look and if they are creating scoring chances. Some of the stats that we look at are similar to the analytic stats so I guess it does come up, but it’s more of our own stats, not the analytic stats. -Gallant

While numbers play a role in the decision-making process, Gallant coaches by feel to a certain extent. He can tell when something isn’t working. He also can tell when guys are too comfortable. So when he hits the switch to shake things up, you shouldn’t be surprised.

Yes, it is on hunch. I don’t like to change our lines a whole lot but once in a while you throw something out there. There’s nothing tough about (changing lines) if you aren’t getting results. For two years I’ve tried to keep my lines together as much as possible. But you’ve got to mix ’em up once in a while. I think every team mixes them up when you are losing a little bit.

But I think when you put top players with top players it doesn’t matter. You get used to those guys. Sometimes it might piss them off, they want to get back with the regular line. Show me, get the results, and I’ll put you back. –Gallant

These days, the buzzphrase is “It’s a process.” Coaches in all sports use it to buy time when they’re trying to sort things out and keep the fans’ and ownership’s wrath at arm’s length. In the Golden Knights’ case, things aren’t as dire as you might believe. But they certainly aren’t great either. And with Thanksgiving just days away, this is still a team in a good spot to secure a spot in the postseason and perhaps even challenge for the division title.

You want to blame Gallant for the current predicament the team is in? That’s your right, though I disagree. He still has the respect of his players and his message is still getting through.

Ultimately, however, it’s about accountability, not change. The players, not the coach, will decide this team’s fate. They’re the ones who have to perform for 60 minutes, or longer some nights.

And if they can’t or won’t, they deserve whatever happens to them.