Nate Schmidt had just come off the ice after Saturday’s morning skate at City National Arena and he was wearing a big smile.

Nothing new about that. Schmidt is usually smiling. As one of the members of an exclusive club, he gets the fact that playing in the NHL is a privilege and it’s one that he embraces. 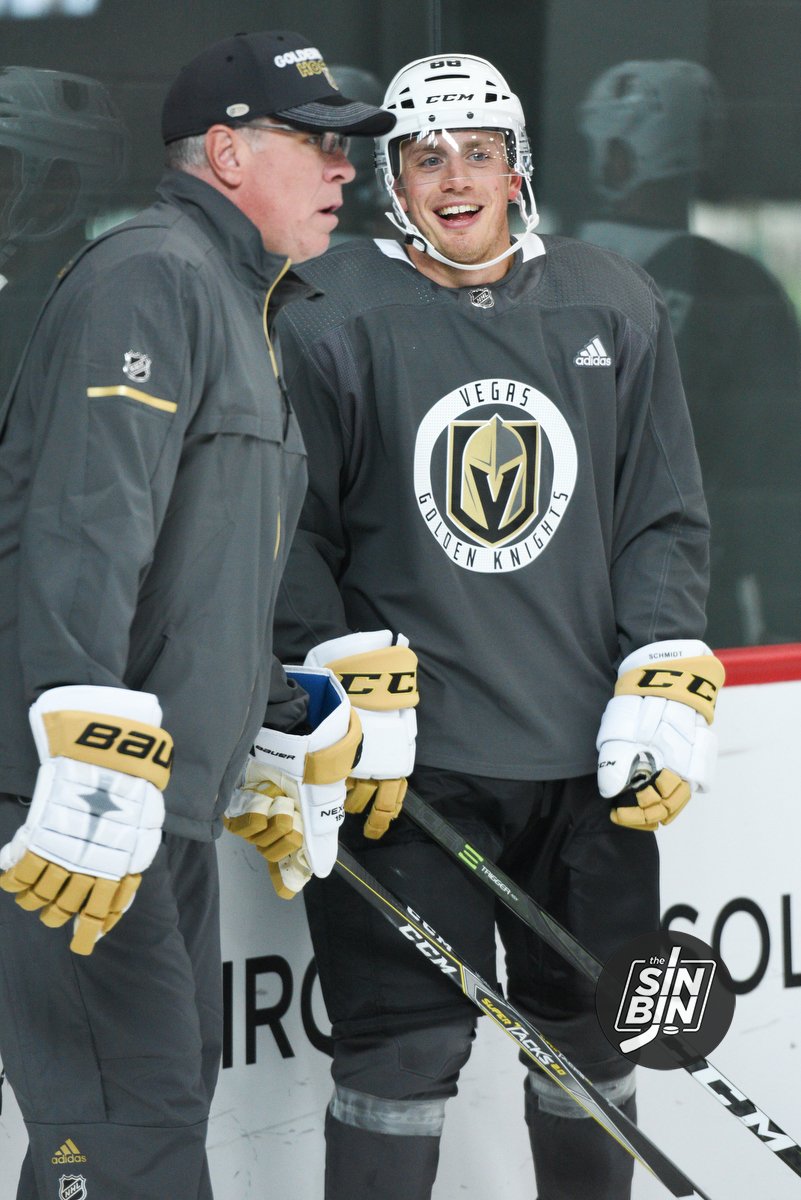 But there was something different about Saturday’s grin. I don’t know if it was an aura or a sudden uptick in demeanor, but Schmidt was really, really in a good mood. Perhaps it was the fact that after being away from home for nearly a month, he got to sleep in his own bed Friday night and that he and his teammates would finally get to skate in their own rink later that night in front of their fans.

My theory is Schmidt is a happier person these days because he is playing better hockey and he seems to enjoy playing for Peter DeBoer.

Let’s not sugarcoat it: it has been a tough year for the 28-year-old defenseman from Minnesota. He hurt his left knee on opening night in a collision with San Jose’s Logan Couture and he missed 12 games. He struggled early upon his return. Then his coach was fired as the Golden Knights went through another befuddling stretch of inconsistent play.

But lately, Schmidt has shown signs of being his old self, the guy who jumped into the play and made things happen, which is what the Knights got from him their inaugural season in 2017-18 when they went to the Stanley Cup Final.

I think one of the big things is simplifying your game. I was trying to do too much the first half of the year. You tear it down, bring it back up, sort of like a grassroots kind of thing. Schmidt

Schmidt and Shea Theodore have both been contributors to the Knights’ attack. Since DeBoer took over for Gerard Gallant Jan. 15, Schmidt has score two goals and has six assists. He has had back-to-back multi-point games and now has 26 points for the year.

Theodore’s numbers are even more impressive. He has two goals and seven assists since DeBoer got behind the bench. He has had multi-point games in his last two as well and three in his last seven. They’re part of a D-corps that is playing better, is skating faster, is making better decisions and is engaged offensively.

I think everyone’s playing better defensively and that translates into better play offensively. Pete wants the defensemen to be involved and we’re playing as a five-man unit so the D gets involved in the attack. It’s definitely a fun way to play and I think everyone is buying in. -Schmidt

DeBoer said he always liked Schmidt’s game when he was coaching the Sharks and he is trying to put all the defenseman’s talents on display, which means making plays in the offensive end while being more responsible in the defensive end.

I think Nate Schmidt has been excellent the three years he’s been here. He’s probably part of the group that dropped off as little bit earlier this year. But he’s competing hard and he’s doing what we’ve asked him to do. -DeBoer

The long break also helped Schmidt reboot mentally. He was showing signs of returning to his former self before Gallant got fired. But under DeBoer, he appears refreshed and has rediscovered his offensive game. Physically, the knee doesn’t appear to be an issue.

I think the time off did a lot of good for our team, not only physically, but mentally too. We know how important all the games are at this time of the year. It gives you that added drive. I feel like I’m more involved. -Schmidt

Unfortunately, there weren’t many smiles Saturday night as the Knights gifted a couple of points to Carolina, losing 6-5 in a shootout after failing to hold two-goal leads on three separate occasions. And while Vegas did accrue a point, nobody was happy with one on a night they were going for two.

Yet, Schmidt played O.K. against the Hurricanes. He was on the ice for Andrei Svechnikov’s fluky goal late in the first period that he missed getting his glove on and wound up going off D partner Brayden McNabb and past Marc-Andre Fleury. But he had the two helpers, no giveaways, three takeaways and blocked two shots. His 22:29 TOI was second only to Theodore’s 25:31. So DeBoer definitely trusts Schmidt’s game.

What does this all mean going forward? Simply put, if the Knights are going to make a serious push to win the Pacific Division and secure a spot in the postseason, they’re going to need more of the kind of play from Schmidt they’re starting to get.

And we all know that when he’s performing well, making plays at both ends and contributing, he’s a happy hockey player. And happiness can go a long way for a team, both on and off the ice.