Carp: It’s Good To Be Back!

**Southern Nevada Sports Hall of Famer, Steve Carp’s returns to SinBin.vegas for the 2021 season. His weekly column publishes every Sunday during the Golden Knights season and is brought to you by the Jimmerson Law Firm.**

I missed you folks.

When the NHL season paused last March, my column for SinBin also went on hiatus. But unlike the league, which resumed play in July, I remained sidelined. I felt like Drew Doughty. Or Jack Eichel.

But thanks to Ken, Jason, and especially Las Vegas attorney Jim Jimmerson, who is sponsoring this column once again, it’s back to work for what will be a most fascinating season. And it starts tonight at T-Mobile Arena where no fans will be admitted inside to watch the Golden Knights host Anaheim.

Fifty-six games. A restructured and renamed division. A captain for the first time. Arguably the best goaltending tandem in the league. New faces on the scene. Old ones having departed. All sorts of strange scenarios playing out.

That’s what we have to look forward to over the coming months. Interesting? Hell yes. Unpredictable? Absolutely. Frustrating at times? Count on it.

For me, the Golden Knights are built to make the playoffs and make a long run, similar to the Edmonton bubble as they advanced to the Western Conference Final. Are they good enough to play for and win the Stanley Cup the way they’re currently constructed? Perhaps. But I have some concerns.

Let’s start with the obvious. The schedule mandates you start fast if you’re serious about making a run into the summer for the Cup. And when you look at the schedule, everything is set up for this team to get off to a quick beginning.

Two with Anaheim at home. Four with Arizona, two here, two in Glendale, two with St. Louis and then two with San Jose in Arizona. That’s 10 games, all winnable, regardless of who is in goal that particular game. 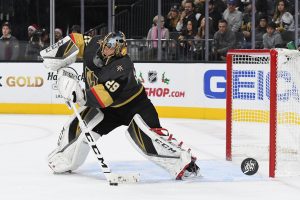 Peter DeBoer said he will go with a 50-50 split between Robin Lehner and Marc-Andre Fleury and then all bets are essentially off as he’ll settle on a No. 1. If DeBoer is true to his word and it’s a fair and open competition between Lehner and Fleury, I have no problems with that. Both looked good in training camp and both are capable.

I like the way the defensive pairs line up, with Alex Pietrangelo and Shea Theodore having veteran partners while youngsters Zach Whitecloud and likely Nic Hague form the third pairing when there are six D in the lineup. Supposedly there will be 13 forwards and just five defensemen tonight vs. the Ducks. Too bad Jon Merrill isn’t still a Golden Knight — this might have been the perfect situation for him to see the ice. But that’s Detroit’s problem now.

Pietrangelo looked like he was trying to find a comfort level during camp and having him paired with a veteran like Brayden McNabb should help accelerate his break-in period. Alec Martinez remains a great fit with Theodore and the two appear to have developed a nice chemistry.

Up front is where I pause for concern. If you expect William Karlsson and Jonathan Marchessault to step up their offensive games and look more like the players we saw in Year One, that lowers the anxiety level. Same if Cody Glass plays like the guy the team anticipated him developing into when they drafted him No. 6 overall in 2017.

I still like Chandler Stevenson playing between Max Pacioretty and the Captain, Mark Stone (told you so the day they acquired him from Ottawa!). Of the many moves management has made, acquiring Stevenson over a year ago from the Capitals remains one of the best. Stevenson is fast, can move the puck, create in tight space and is not afraid to mix it up.

The Knights need to do a better job of scoring, especially getting some greasy goals. Yeah, the pretty tic-tac-toe passing and finishing looks good on the 11 o’clock news, but having one go off your butt and in the net counts the same. DeBoer made it a point of emphasis in training camp trying to score off rebounds, tip-ins and redirected passes.

I also see three intangibles which will ultimately spell glory or despair for the Knights this season.

One, how does the team manage COVID-19? A major outbreak, such as the one Dallas is currently dealing with, can quickly derail a team. And as we’ve learned, it doesn’t take much. A trip to the store. Dinner in a restaurant. Having a family member bring it into the house from somewhere. All are possible to trigger a virus issue. The Knights claim they’re on top of it and have every league-mandated safety protocol in place. We’ll see if it works and they avoid a coronavirus calamity.

Two, and this is related to the virus, how reliable will the team’s taxi squad be? If called upon, will someone be able to step in and the team not miss a beat? How DeBoer and the hockey staff manage the taxi squad will be critical.

Finally, there’s DeBoer himself. He appears to have gotten adjusted to coaching this team. He knows the personnel and they know him. He likes the teaching portion of his job. He explains things to his guys so they fully understand what is being asked of them. I think they understand him, respect him and play hard for him.

He’s going to be asked to improvise and adjust, not only from game to game, but period to period and even shift to shift. That’s nothing new for any NHL coach. They all deal with it. But with the schedule set up the way it is and the familiarity of their opponents, being able to switch things around and fix what’s broken will be more critical than usual, especially in those back-to-backs against the same opponent.

DeBoer appears to be able to do that well so we’ll see how that shakes out when things get a bit sideways, which they will.

We’re all looking forward to mid-February when Vegas and Colorado meet for the first time for four straight games, including the Feb. 20 outdoor game in Lake Tahoe. But while that will be a pivotal series for sure, do not underestimate the importance of the first 10 games. Things are going to be moving quickly and a stumble out of the gate could be difficult to make up the deficit.

But right now, let’s enjoy the fact hockey is back, the Golden Knights are returning to the ice and hopefully we’ll all be together in the Fortress at some point this season.

Maybe even in early July.