When the Golden Knights traded for Chandler Stephenson earlier this month, my initial reaction was: “O.K.”

I wasn’t overwhelmed by the move nor was I disappointed, given what the Knights gave up to the Washington Capitals to get the fleet forward — a fifth-round draft pick in 2021. What I knew was the team was lacking depth in its bottom-six forwards and Brandon Pirri and Nicolas Roy didn’t seem to be figuring in the team’s plans in the immediate future.

Valentin Zykov? I also didn’t think he was part of the Golden Knights’ future. So snagging Stephenson seemed like a “nothing ventured, nothing gained” kind of move. If it worked out, great. If it didn’t, at some point Cody Eakin would be back and he would reclaim his spot.

But then Cody Glass got hurt against the Rangers on Dec. 8, courtesy of a Brendan Lemieux elbow to the head. He likely has a concussion or symptoms of one and who knows when he’ll be back on the ice? There was no update on Glass’ status or Eakin’s prior to Sunday’s game against Vancouver at T-Mobile Arena. 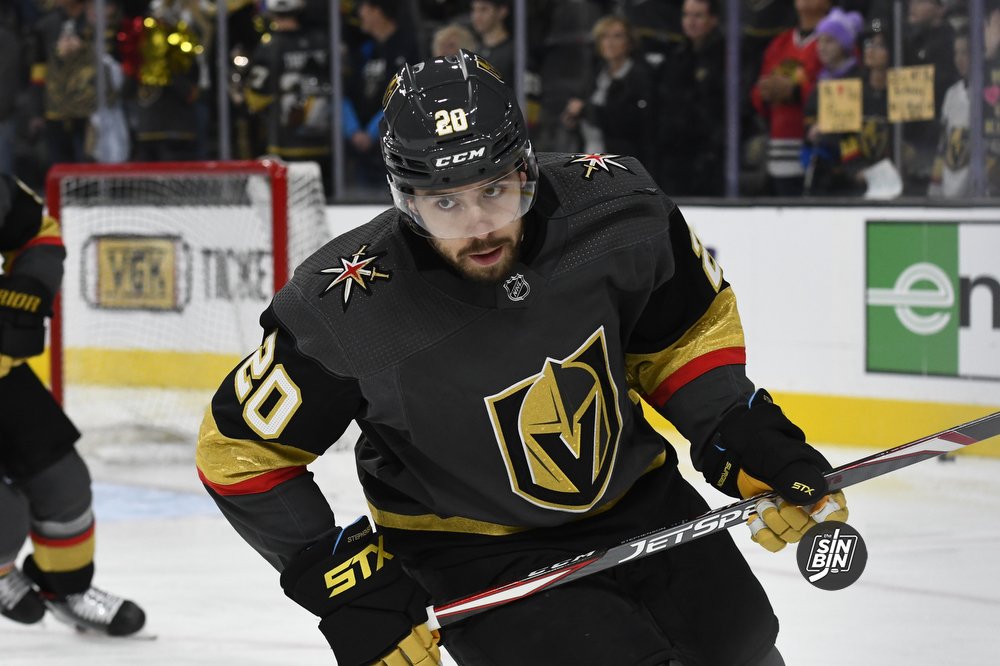 Suddenly, Stephenson has become a more valuable commodity. The Knights recalled Zykov from the Chicago Wolves and put him on the third line. Stephenson, who has played with virtually everyone so far in his brief stint in Vegas, is centering for Max Pacioretty and Mark Stone on the Knights’ second line and the trio appear to be clicking. Both Stone and Pacioretty have registered points in three straight games while working with Stephenson.

Part of it is when you’re playing with two talented wingers, it forces you to elevate your game. Part of it is Stephenson has his own solid skills — he’s an excellent skater, has a good hockey I.Q. and he has quickly picked up Vegas’ system.

The other part of the equation is he’s an NHL veteran. This is his fifth season in the league and he’s just 25 years old. He understands how to play at this level. He has kept things simple and not tried to overthink the situation, regardless of who he has been paired with by Gerard Gallant.

It’s been good. Obviously when I first came here, meeting a whole new team, that’s something I’d never experienced before. But knowing Schmitty (Nate Schmidt) and Nabber (Brayden McNabb) here obviously helped. With the group that’s here, it’s a very welcoming group. Everybody made me feel at home right away and made me feel like I was part of the team. It was an easy transition. -Stephenson

With his skills and his versatility, Stephenson reminds me of another Golden Knight who was obtained in December and turned out to be an important cog in the team’s run to the Stanley Cup Final their inaugural season.

Remember when George McPhee plucked Ryan Carpenter off waivers from San Jose? No one thought much of the move at the time. He was a decent player who wasn’t getting much ice time with the Sharks.

Carpenter turned out to be a reliable, versatile player, someone who could play anywhere, kill penalties, be on the ice late in games to help protect a one-goal lead and was good in the locker room and was liked by his teammates.

I look at Stephenson and I see Carpenter, only a better version because he is a better skater and may be a little bit more talented offensively. Gallant agreed when I asked him about the comparison of Stephenson to Carpenter, who is currently with the Chicago Blackhawks.

Gallant has used Stephenson on his second penalty kill unit. He has had him out on the ice late in games when the Knights were nursing a lead or were tied. And the fact he’s playing Stephenson with Stone and Pacioretty tells you how much he trusts Stephenson’s game.

We like him. He’s done everything we’ve asked. -Gallant

Stephenson said having Gallant’s confidence in him means a lot. He comes to the rink knowing he’s in the lineup and he can focus on performing rather than worrying about whether he’s going to suit up.

That’s huge. It makes you feel good about yourself. Obviously, from the first day being here, I’ve been slowly shown more responsibility. It’s been awesome so far. -Stephenson

Like Carpenter, Stephenson is a Swiss Army knife on the ice. You can put him anywhere at any time and he’ll do right by you. But your expectations might be heightened when it comes to his offensive output.

In his time with Washington, Stephenson had 14 goals and 19 assists while averaging 11:40 TOI. Remember, he was essentially a fourth-liner so his first responsibilities were defensive.

In six games with the Knights, Stephenson has two goals and an assist. Playing with Pacioretty and Stone, he likely will see his offensive numbers receive a boost. That said, he is a player whose value, in my mind, is more when his team doesn’t have possession. I have been impressed with his forechecking, which is a matter of effort. He has come back into his own end and helped his goaltender and his defensemen. He’s good with the puck in his defensive half of the ice and his ability to be strong with the puck and make the simple but correct play more often than not has helped the Knights tighten things up defensively.

I think it’s a good change for him. It’s a good opportunity for him. He’s excited to be here. It’s a pretty easy team to fit in with. His transition has been pretty seamless. I played against him in juniors. He has underrated skill. He skates well. He makes great plays. He has a great shot. I think that’s the thing that got lost in the fold in Washington. They have all those high-end skill guys and I don’t think he was able to showcase his skill. He’s getting that opportunity here. -Stone

Stephenson said playing with two highly skilled players is something he didn’t get a chance to always do in Washington and he appreciates the opportunity.

I just try to use my speed as much as I can and try to get them the puck as much as I can. They’re top-end, all-star forwards. They make my job and my life easy. -Stephenson

Stephenson was on McPhee’s radar. After all, he had drafted Stephenson while he was still running things in D.C. But the game Vegas plays is different from the Capitals’.

I think your brain has to be turned on a little more here with the style they play. But it’s a little free-er here. It’s a make-a-hockey-read type system, which is nice. -Stephenson

He has not spent much time in Las Vegas given the Knights have been on the road. But Stephenson said he enjoys Summerlin and the less hectic pace.

It’s a really nice area. You’re close to the (practice) rink. I really like it. Every day, every game is more experience, more confidence learning and everything. So that’s something to be thankful for. -Stephenson

For what seemed like a minor move at the time, bringing Stephenson into the fold could have major implications — both in the Knights’ immediate future and further down the road. And given what he had to give up to acquire him, this could be one of McPhee’s better moves when it’s all said and done.