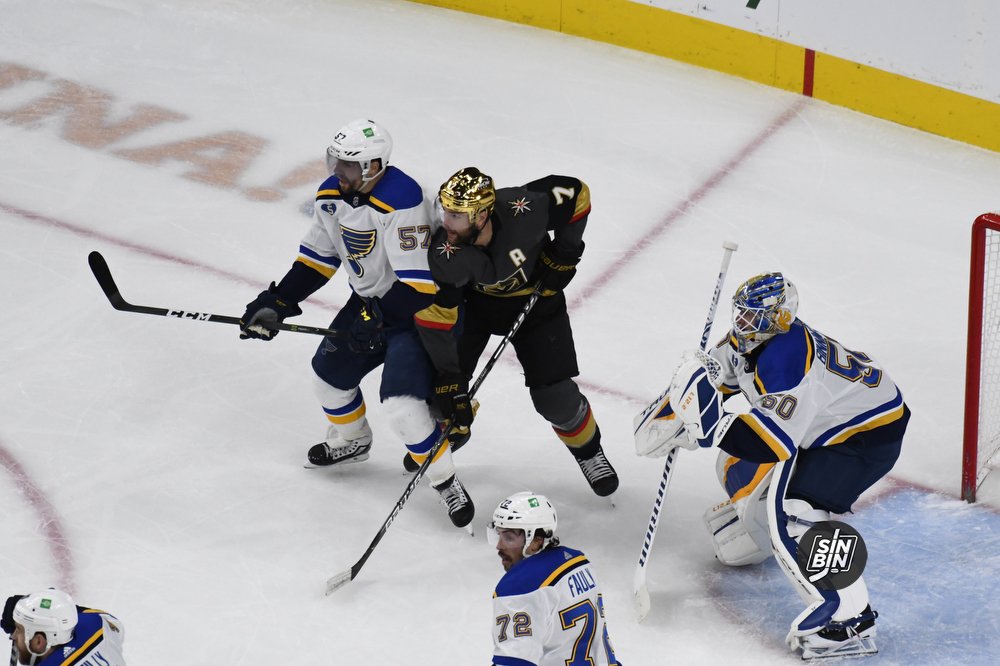 The moment the Golden Knights inked the mega-deal with Alex Pietrangelo the identity of the defense changed. Where VGK had previously been seen as a balanced group, Pietrangelo’s addition turned them into a collection of six defined by the two superstars. With Shea Theodore’s emergence the year prior and Pietrangelo captaining the Stanley Cup winner the year before, Vegas’ pair could be put up against any other defensive duo in the league.

Then the season came.

Theodore started off red hot amassing 14 points in his first 15 games while Pietrangelo took some time to settle in. Over the course of the year both missed time but throughout the balance of the regular season, it was clear that Theodore was the better performer. In fact, he earned himself 109 Norris votes, good for 6th place, where Pietrangelo did not receive a single vote.

Then the postseason came. And it flipped.

Pietrangelo was the best player in a Golden Knights jersey for the entire 19 game run while Theodore faded to the background going pointless in 10 of the first 12 and 13 of 19 playoff games. Pietrangelo racked up four goals including a stretch where he scored three of the team’s four total goals while Theodore lit the lamp just once in 439 minutes.

Due to the shortened season and the nature of the playoffs, the sample sizes are both fairly small. However, it seems like much more than a coincidence that when Theodore was on Pietrangelo was not, and vise versa.

I wanted to take a simple statistical approach to looking at this odd phenomenon before potentially diving deeper into it tactically and/or systematically. So, I went back over the 38 regular season games and 19 playoff games that featured both Pietrangelo and Theodore. I was focused on the two simplest stats, goals and points.

The idea of acquiring Pietrangelo was to add his blue line production to the already excellent production Theodore had been generating. In theory, rather than having one defenseman scoring every fourth or fifth game, Vegas would have two. They’d also have two guys generating more than a half-point per game meaning there should rarely ever be a night where neither are on the board.

It didn’t pan out that way though. Here are their numbers this season in the 38 regular season games and 19 playoff games both were active,

and the differences when they are on the same team from the two seasons prior.

Pietrangelo – Even
Down .03 regular season
Up .10 playoffs

It’s instantly troubling how many downs there are when you consider the success the Golden Knights had both in the regular and postseasons. But beyond that there’s a Newton’s Law situation going on wherever there are ups. Anywhere Theodore is up, Pietrangelo is down and anywhere Theodore is down Pietrangelo is either also down or up. There is not a single “season” in which both players saw their production rise compared to their last two years.

Goals per game and points per game don’t quite match up here because it’s possible to score more than once in a game. So, we have to adjust the numbers a bit to take that into account. Here the adjusted numbers for how many unique games each scored a goal or registered a point in the two seasons before they became teammates.

Probabilities are tricky, so I won’t get into the complete mathematics behind this, but when you have one outcome expected to happen 17% of the time (Theodore goals) and another also expected to happen 17% of the time (Pietrangelo goals), those two outcomes should come up in the same game about 3% of the time. In 57 games, that would mean it should happen about two times. It only happened once. But, small sample size, so relax.

As for points, before they were together it was expected that Theodore would score a point in 47% of games while Pietrangelo would register one in 46%. The overlap of those two says 22% of the time they’ll both achieve the outcome. For the Golden Knights, they saw it happen 12 times in 57 games or 21% of the time, pretty much exactly as expected. The postseason is a bit troubling as the expected outcome for both to score a point was 57% and it happened just nine times in 19 games or 47%.

The probability of neither scoring is similar. It should happen 29% of the time. For the Golden Knights, it happened 26% of the 57 games. In the playoffs, it was supposed to happen 13% of the time and it actually happened in six of 19 or 32%. The Golden Knights unsurprisingly struggled in those playoff games going 2-4 including the disastrous Game 5 at home against the Canadiens.

This is far from the end of this narrative for me as I believe there are literally hundreds of ways to approach this, but to me, the groundwork is certainly laid for concern, especially considering the postseason performances.

Can two superstar defensemen coexist to both play to their expected levels at the same time? One shortened, wacky, COVID-effected season says maybe, maybe not. The Golden Knights need the answer to be a clear yes if they intend on winning the Stanley Cup in the much more normal upcoming 2021-22 season.