Well, you can probably tell where my mind is today. The stock and crypto markets are tumbling and like everyone with money invested I’m forced to decide if it’s best to buy more, sell what I have, or simply hold. I run a hockey website for a living and many people don’t even respect my opinions on sports, so I’m not even going to begin to give you any advice on what to do in this bear market. Instead, I’m going to try and spin this concept into the world of the Golden Knights.

So, here’s how it works. I’m taking four Golden Knights whose stock has risen or dropped over the course of the last 12 months and making a call on what a wise investor would do with the asset. Buy, sell, or hold!

Note: This is meant to be viewed completely independent of the Golden Knights’ salary cap situation.

A Selke Finalist and thriving as a captain of a good team, Stone was making his $9.5 million contract look like a steal. After dominating in the Colorado series including netting an overtime game-winner in Game 5, Stone’s value was at an all-time high heading into the Conference Final against Montreal. Then, it started to descend.

Stone was shutout (or skunked as he called it) in the series with the Canadiens. He followed that up by missing a portion of the preseason due to a freak injury. Then, he suffered a non-contact back injury in the 2nd game of the season which plagued him all year. Through it, he managed to post 30 points in 37 games but when the moment was biggest, he just didn’t look himself. This offseason, he underwent a successful back surgery which has the skeptics out in force wondering if he’ll ever return to his dominant old self.

For me, based on the history of Mark Stone and the knowledge I’ve gained through Dr. Pinegar on the injury, this is an easy decision for me. Buy, buy, buy!!!

There’s obviously a risk that the injury could reoccur and he’ll have to undergo a series of back procedures, but most athletes that deal with these issues do return to form in between the surgeries. As long as he’s on the ice, and we expect him there on Opening Night 2022-23, he’s going to be awesome. Stone will regain his form at some point, probably soon, and the public perception will skyrocket on him when he does. There will be a time to sell, and it may not be that far away, but that time is definitely not now. Decision: BUY

The 25-year-old underdog story won the hearts of pretty much the entire Golden Knights fan base. From an undrafted goalie playing games in college in Canada to the AHL Goalie of the Year to stepping in as Vegas’ starter down the stretch of a playoff chase, Thompson’s rise has been meteoric.

As an asset though, the sample is still incredibly small, both in the NHL and even the AHL. His award-winning AHL season was played in a shortened year against just a handful of opponents and his stint in the NHL consisted of just 19 games and ended with the Golden Knights out of the playoffs. Of course, he was excellent across pretty much all of it, but there are a huge number of examples of players in situations just like his that looked good at first but quickly flamed out.

The right play is to hold on Thompson. There’s no way I’d even consider selling as the upside is far too great, but the volatility of goalies, especially ones who shine in a fill-in role, makes him too risky to go all-in on… yet. Decision: HOLD

When asked what he thought about his season in 2021-22, Karlsson said it was “not great,” and he’s right, it wasn’t. He posted the fewest points in a year he has as a Golden Knight, he missed a significant portion of time with an injury, and his goal-scoring continued confirming that the 43-goal season in 2017-18 was a fluke.

However, it was clear to see how badly the Golden Knights missed Karlsson when he wasn’t in the lineup. That speaks volumes about what he does in every area aside from offensive production. He’s still the best defensive center on the team, his seemingly endless gas tank comes in handy late in games and even more so in the playoffs, and his ability to clean up mistakes made by others often goes unnoticed.

I’m on board with everyone else saying he’s never going to score like he did in the expansion season, but I also don’t think he’ll ever struggle to do so as much as he did this year. So, give me more of the valuable asset at his lowest point in the past five years. Decision: BUY 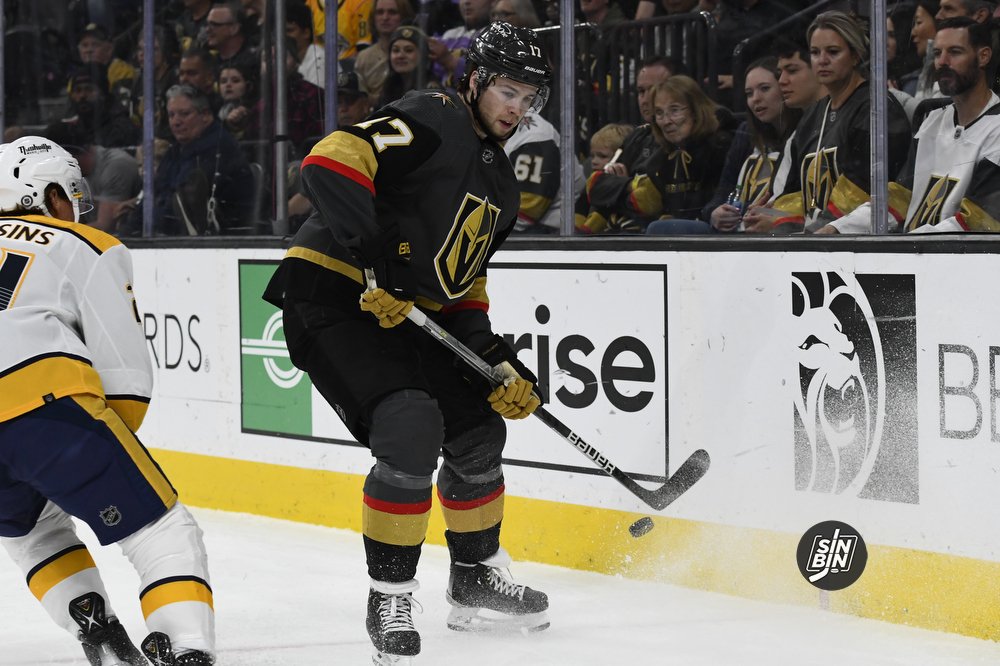 The season Hutton just turned in, considering the circumstances, was nothing short of extraordinary. He went from out of work during Training Camp to a clear top-pair option on a team fighting for a playoff spot. No, it wasn’t perfect by any stretch of the imagination while he was out there, but he was far from a liability when playing with Alex Pietrangelo.

What the Golden Knights got out of Hutton is something they never want to have to get again. On a good team, Hutton should be a sixth or even seventh defenseman. On last year’s VGK, there were many games where he was installed as #2 or #3.

This is probably the highest Hutton’s stock will ever be for the rest of his career. It’s unlikely to fall massively over the next few years, but this is the peak, get out now. Decision: SELL

**Do me a favor and tell me if you like this concept. If yes, I’ll do another set of four later in the week. If not, no worries, we’ve all got bigger things to worry about as our retirement accounts continue to drain before our eyes.**