The Golden Knights had just swept the Kings, their division rival, in the first round of the playoffs. They dominated a majority of the play, gave up just 3 goals in 14 periods, and trailed for less than 34 of the 275 minutes of play in the series.

I expected I’d be walking into a jubilant locker room full of laughter, smiles, and high fives. That was not the Golden Knights locker room after Game 4 of their sweep.

It was cool and collected. I’m just already getting ready, starting to forget about this series, trying to get ready for the next one. See who we play and go from there. -Erik Haula 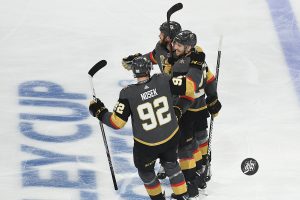 They’ve never been here before, but they had never been anywhere before, and that’s never stopped them. (Photo Credit: SinBin.vegas Photographer Brandon Andreasen)

This isn’t new for a winning Golden Knights locker room though. Outside of the very first game in franchise history in Dallas, the Vegas locker room doesn’t get too high after wins. Whether it was beating Tampa Bay to move into first place in the NHL, knocking off the Penguins for Fleury or a somewhat meaningless 7-3 win over Calgary, the demeanor in the room remained the same.

When they clinched the playoff berth, it was almost as if they thought it should have happened a while ago. When they won the division, they kind of had this look of, “well yeah, we’ve been ahead by 10 points all year.” When they won Game 1, and 2, and 3, the same, but I thought it might be a bit different having finished the series and knowing they’ve got a plenty of time to revel in this one before they have to move on. It wasn’t the case.

Why would you be satisfied? We don’t have the Stanley Cup. We didn’t start the playoffs thinking, alright if we make the second round we are happy about it. We’re excited because we just won a series and we’re probably going to get one more day to relax the bodies, but in two days from now it’s back to business. -Pierre-Edouard Bellemare

It feels like this team believes they’ve been here before. They are confident because no team in the league concerns them. Sharks or Ducks? Vegas has 3 wins against both of them. Nashville, Winnipeg, Boston, Tampa, Pittsburgh, Columbus, you name it, the Golden Knights have beaten them all, and they know they can do it again.

We know we want to accomplish more than just the first round. -David Perron

They aren’t like other teams, in construction, style, makeup, or mentality. The Vegas Golden Knights are different, and they are going to the second round of the playoffs where they’ll inevitably be doubted once again, but for them, that’s business as usual.