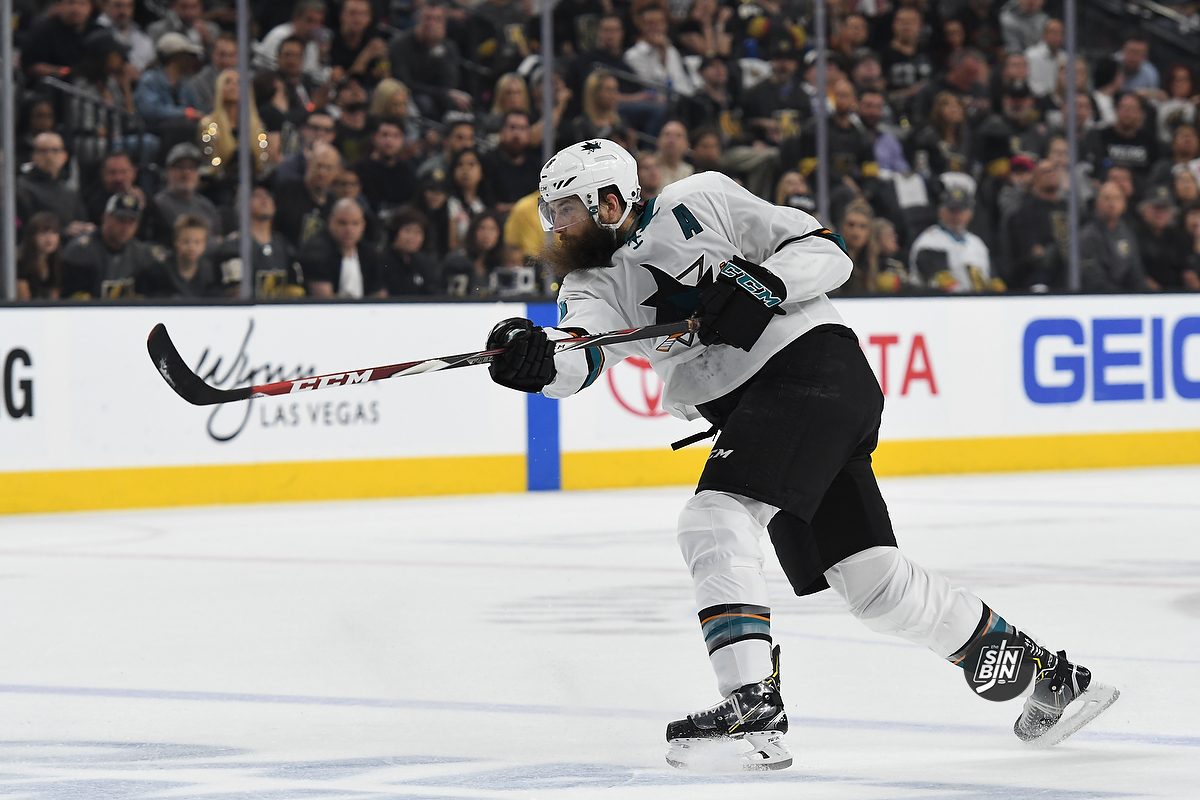 To make it easier to see, I’ve taken a still shot of where Burns is on the ice the moment when the puck is possessed by Vegas. 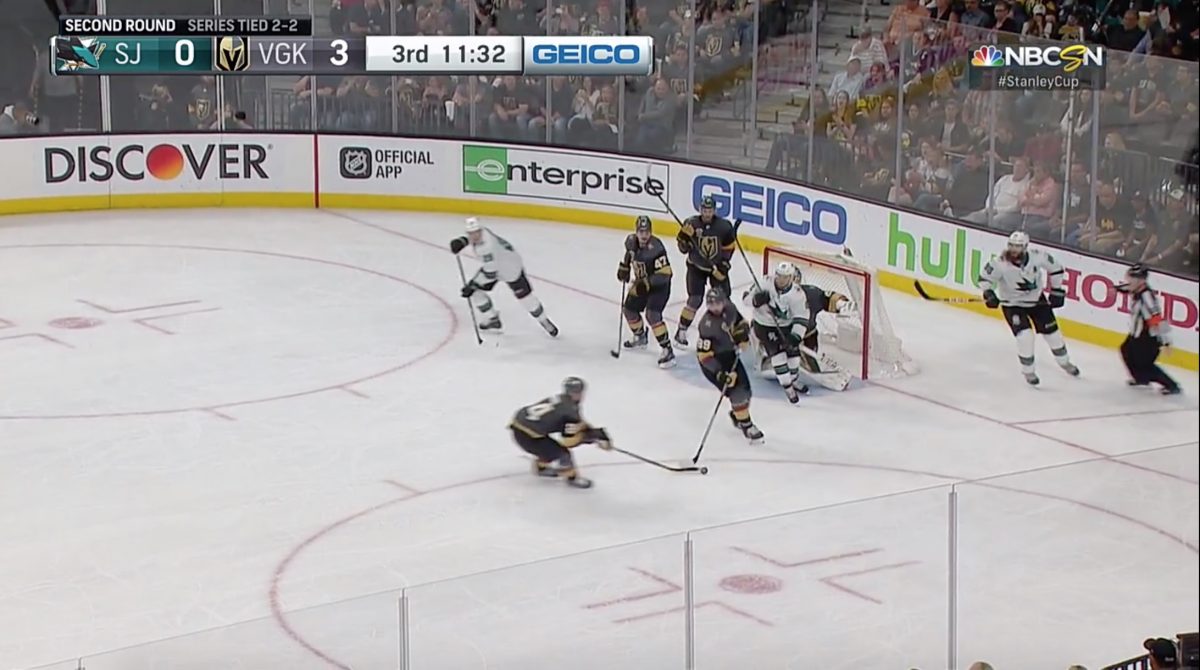 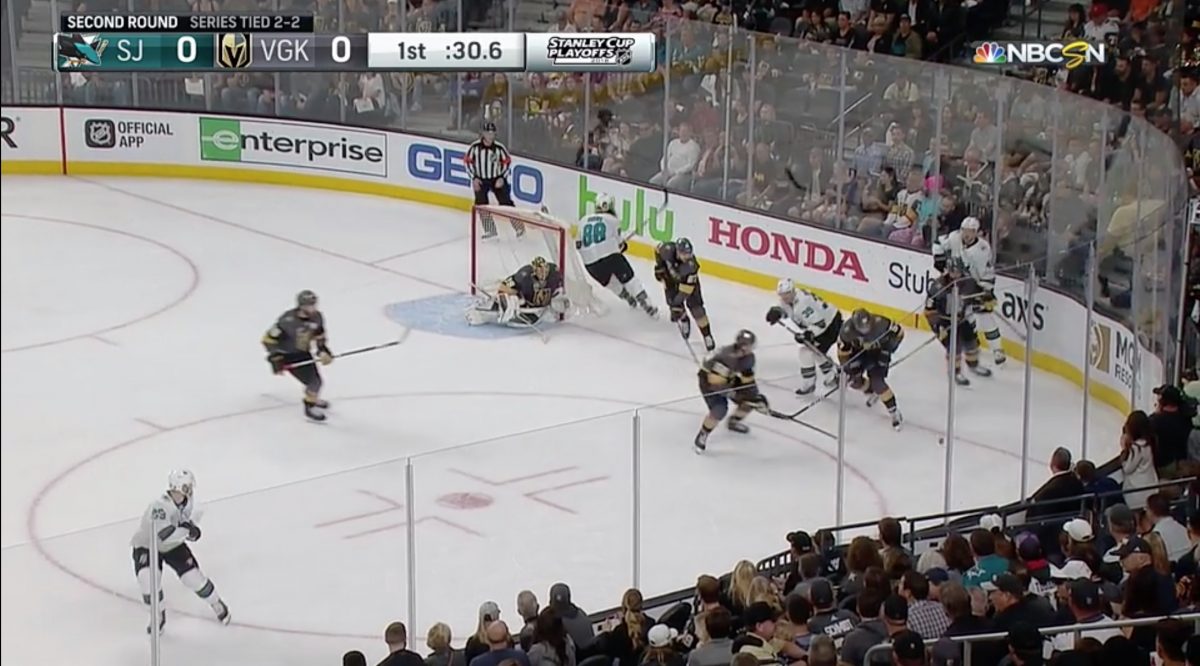 In both, Burns is underneath the Vegas goal line, 200 feet away from the net he’s supposed to be defending.

These are just two instances where this happens, and they are magnified by the fact that the Golden Knights scored. However, this is commonplace for Burns, and even if they don’t lead to goals, they often lead to easy exits of the defensive zone and even easier entries to the offensive zone. Again, when the Golden Knights are at their best, they aren’t struggling to get out of their own zone and through the neutral zone. Burns’ poor positioning often aids the process for Vegas.

Now let’s get to some of the more egregious ones. First off, here’s a turnover in his own end that directly leads to a Golden Knights goal.

This is somewhat abnormal for Burns, but boy is it bad. He’s usually pretty good with the puck on his stick, but here, not so much.

In this one, Burns is just flat out beat in the neutral zone by Alex Tuch. Not surprisingly, the Golden Knights had just thrown a nearly identical stretch pass right at Burns moments before this, and it was just out of reach of the Golden Knight forward. This one was not, and Tuch had a glorious chance to score.

Finally, my favorite one. Tuch picks up the puck, cuts inside, and Burns looks like he’s stuck in mud.

In all three, the Golden Knights seek out Burns, and abuse him. Once in the defensive zone, once in the neutral zone, and one at the offensive blue line.

Burns has shockingly awful gap control for a defenseman that is on the ice for nearly half of every game (average TOI 25:06). Whether it’s being connected to a forward following a turnover or even just on a standard entry of the zone, Burns’ backward skating is constantly exposed by the Golden Knights and it’s a huge reason why Vegas averages 3.86 goals per game against the Sharks. Vegas is the team San Jose has allowed the most goals to each of the previous two seasons, and the 22 playoff goals are the most the Sharks have allowed in a series since the “Reverse Sweep” by the Kings in 2014.

One more video, but not because Burns did anything wrong necessarily, but instead because it’s hilarious and it furthers how much Vegas enjoys toying with the big guy.

Statistically, it doesn’t look like Burns is awful against the Golden Knights. In the playoff series, he scored twice, had three assists, individually created 15 scoring chances and drew a penalty. His Corsi was a stellar 59.95% and the Sharks created 38 more scoring chances than Vegas with Burns on the ice.

However, when you dig deeper, it’s not hard to figure out why. Burns started 78.5% of his shifts in the offensive zone. At even strength, he started 68.2% of his shifts in the Golden Knights D zone. Yet, at even strength, the Sharks gave up seven goals while scoring just three with Burns on the ice. Vegas created just three fewer high-danger chances than San Jose despite starting more than two-thirds of the shifts against Burns 175 feet from the Sharks goal.

Quite simply, Burns is dangerous when he’s in the Sharks offensive zone and when the Sharks have the puck, but anywhere else on the ice, he’s a liability. The Golden Knights scored 13 5-on-5 goals in the playoff series, seven of them with Burns on the ice. Vegas scored 22 total goals in the series, 12 of them were with Burns out there. Let me remind you again, Burns started 78.5% of his shifts in the offensive zone, yet he was on the ice for 55% of the goals the Sharks allowed.

Maybe Drew Doughty was on to something.

Doughty on the Norris race:

"All you’ve got to do is watch one San Jose Sharks game and you’ll see Brent Burns get beat three times a game, literally, and everybody has him up for the Norris. I just don’t get it”

As we head into this series, you’ll probably hear plenty about Brent Burns. They’ll gush over his skating, be amazed by how he keeps the puck in at the blue line, and praise him every time he activates into the play offensively. But keep a close eye on #88 as the series goes on and you’ll surely see what I’ve illustrated here.

Brent Burns will be a weapon in this series, but it’ll be for the Golden Knights more than it will the Sharks.