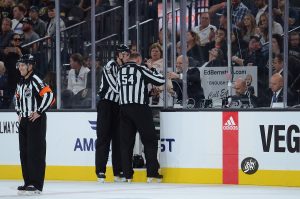 Yeah, I just think it’s tough. A lot of it really is just judgement, there’s nothing really black and white. I think you’ve heard that from not just our team but a lot of teams. It goes for a lot of things, icings, it’s different every night. It’s a hard call for them and obviously it can be tough on us, we don’t know. It’s just part of the game. -Burns

He’s right. Players and coaches complain every night about goaltender interference, slashing, and icing calls. There’s too much gray area for players like Burns. The Norris winner tried to move on and credit the home team. However, you could continue to feel his frustrations.

Yeah, they’ve got a good team. That’s definitely a strength of theirs is their skill and speed. I mean yeah you get a point, that’s important. It’s tough to come out like that. -Burns

We’ve seen many NHL stars leave the T-Mobile Arena empty handed but none of them were as ticked as Burns. His tone and body-language were easy to read. Was it the goal review? Or was it losing to Vegas? We’ll never know… because we tried asking about that overturned call again.

And that’s when it ended.

Michael Hutchinson will start and the plan is to get Jiri Patera into the game tonight too.

Our first look at VGK PP1 from Cassidy is

The other unit is
(Brisson)
Smith-Karlsson-Marchessault
Theodore

*I would guess Brisson is standing in for a guy playing tonight. Likely Roy. Maybe Howden, Amadio, or Kolesar.

Alec Martinez was given a maintenance day today with a minor upper body injury. He's expected to be back on the ice tomorrow.

Best news of the day.

Goalie coach Sean Burke tried three or four times to get a puck to him between the glass and the net. He finally did, and it went through the tiniest hole under the stands. The most heartbreaking thing ever. So happy he got another, and better, one.

Yesterday, the young fan in the gold jersey lost the puck he got at practice. Today, he received a puck SIGNED by Shea Theodore!! 🤗