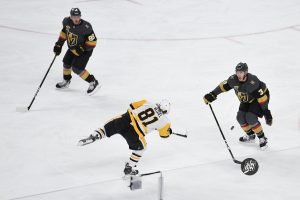 At least we’ve got one guy who will hit you. (Photo Credit: SinBin.vegas Photographer Brandon Andreasen)

The Golden Knights are a lot of things, but one thing they are not is physical. In years past, that would be a major incitement as bigger, tougher, skilled teams would seemingly always win. Nowadays, it’s more skill, speed and possession, something the Golden Knights are excellent at. However, not being physical doesn’t mean Vegas isn’t aggressive.

We play a hard game. We win puck battles and some one on one battles, and that’s a big part of being physical. -Gerard Gallant

As we’ve seen all season the winning formula for Vegas has been tempo, pressure, and playing smart with the puck. The overall balance of the club has been incredibly important, as Gallant is one of few NHL coaches able to truly roll four lines and three pairings. Trust in his roster depth is a good reason why Vegas is winning so often. Every player from #3 to #92, gets a the opportunity to impact a game.

Speaking of #3, defenseman Brayden McNabb’s nightly presence can have the ability to change opponents mentality. Players hesitate chasing pucks in the corner or getting into a board battles with the 6’4 defenseman. Against Toronto, McNabb put on a show with consecutive knockout blows on one shift. His bodycheck changed the momentum for both teams. The most impressive part of McNabb’s physical play is his ability to deliver clean hits. Brutal, but clean. Checks look more dangerous coming from a bigger defenseman, but point of contact is legal. McNabb has crushed opponents 669 times over his career, and never been suspended in the NHL.

As you saw against Nashville, he had two big hits back to back. Like you said, they’re clean hits they’re not dirty hits. Guys are ready for those hits. Physical is winning those puck battles and we do plenty of that. We’re not gonna go run anyone out of the building. That doesn’t happen too much in the NHL anymore. -Gallant

McNabb leads Vegas with 104 hits, 37 more than Colin Miller, who is second on the team. Overall, the big blueliner is among the top twenty hit leaders in the NHL. Most importantly, he’s clean and doesn’t commit penalties off hits. Slashing, tripping, and holding is another conversation, but for the sake of this article loving on Brayden, we’ll move on.

McNabb’s presence on the ice got himself a contract extension. Being physical isn’t a big part of the Golden Knights game but they have it covered when they need it with #3.