It’s time for another edition of “Buy, Sell, or Hold!” Today’s contestants weighing in on the Golden Knights trade deadline dilemma are two of TSN’s finest. First up, the Bobfather.

McKenzie went on to explain that McPhee and staff have identified a core, and are attempting to lock them up. Following the trend of extending Jonathan Marchessault and Brayden McNabb.

They’ve got a core of young D that they really like. Nate Schmidt, Shea Theodore, and Colin Miller, those guys aren’t going anywhere… I think they’re probably in negotiations with David Perron and James Neal. That’s not to say contracts are absolutely going to get done. -McKenzie

Now to the contrarian argument from the author behind the ever popular Trade Bait, which still has James Neal listed in 10th.

A lot of people are surprised to see Neal still on this list. The fact that he hasn’t been re-signed so far, and we haven’t heard a lot of chatter about that possibility existing. Even though the Golden Knights are in a strong position to be a solid playoff team this season, they’re going to try and accumulate assets for the long-term. With Neal producing the way that he has this year, certainly there will be a lot of interest in him at the deadline. If, the Golden Knights make him available. -Frank Seravalli, TSN 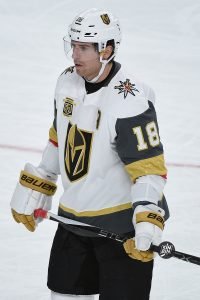 If Bob says it, we believe it. (Photo Credit: SinBin.vegas Photographer Brandon Andreasen)

Keep in mind, Seravalli’s role at TSN is to track trade rumors and whispers from around the league. He’s not saying Neal is gone, but he’s simply warning fans that things could change before the deadline. Especially, since Neal is such an attractive rental for other contenders.

As much as I respect Seravalli and his efforts, it’s tough questioning The Bobfather. If he says Vegas won’t sell, I believe him, which means Neal’s not going anywhere.