The Golden Knights scored four goals in the first period, three inside of a 91-second span, and continued sticking it to the San Jose Sharks for a majority of the 60 minutes of Game 1 resulting in a dominant 7-0 win.

We can’t play a better game than we played last night. We played a terrific game. -Gerard Gallant

It’s hard to disagree with the Jack Adams finalist. Pretty much every facet of the game outside of taking penalties (which they killed every one) the Golden Knights were great. It looked as if one team was playing at a different speed as the other, which is a great sign for the Golden Knights as the series progresses. However, the same lackluster start for the Sharks is not to be expected in Game 2, or at least so say the Golden Knights.

Definitely tomorrow they are going to come out strong and we are going to see the real San Jose Sharks, and we’ve got to be ready for that. -Jonathan Marchessault

I expect a lot more push from the beginning. I think we caught them a little off guard with our speed. -Nate Schmidt

The question remains however, will a better Sharks performance even be enough?

Vegas looked the far superior team any way you slice it, and as it turns out, that’s been the case all season long. As I’ve said on the SinBin.vegas Podcast a countless number of times, when the Golden Knights are playing well, no one can touch them.

We just try and play our game, we can’t worry about what the other team’s going to bring. Most nights when we play our game as good as we play, it’s good enough. -Gallant 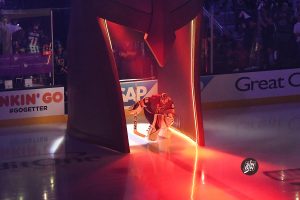 And this article doesn’t even mention how well this guy is playing. (Photo Credit: SinBin.vegas Photographer Brandon Andreasen)

The key for Gallant and the boys is to continue finding ways to keep it up. The Sharks will likely be without one of their best scoring forwards due to suspension, they’ll still be without Joe Thornton again, and Joonas Donskoi’s availability is in question as well. But, this is a team that is coming off a 7-0 drubbing and knows another loss could be deadly to their season.

Everyone, including myself, seems to believe the Sharks will bring their absolute best to T-Mobile Arena tomorrow night. Will it be enough? I say no, and I have a feeling the Golden Knights players, coaches, and management agree, despite the fact that they’ll never say it.