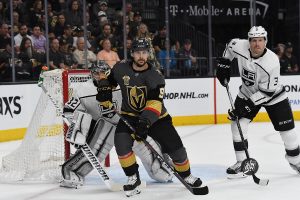 Tatar is a perennial 20 goal scorer, he’s got great speed, a good shot, and looked to be the perfect fit for the Golden Knights. Through 20 games with Vegas, that hasn’t exactly been the case, and now Tatar is set to be a healthy scratch in Game 3 of the first round of the playoffs.

The initial question is whether or not giving up three picks for a player that can’t crack the lineup was worth it. The answer is still incomplete, even with tonight’s benching, because Tatar wasn’t only added to help the Golden Knights for the 2018 playoff run. He has multiple years left on his contract and could still turn out to be a useful top six forward in Vegas.

However, part of the high price tag on Tatar at the deadline was getting him for this playoff season. McPhee traded Brendan Leipsic and figured he’d found an upgrade in Tatar. He hasn’t been. Instead, he’s been nothing more than a competent player who now can’t get in the lineup over a player Vegas claimed for free on the waiver wire back in December.

This is not a failure of a trade, yet, but it is a bold move that shows All Star head coach Gerard Gallant does indeed have full control over his lineup. He was handed a player that was supposed to be an upgrade, and his GM paid a massive price to get him, and yet Gallant still feels comfortable sitting him in the biggest situation of the year. 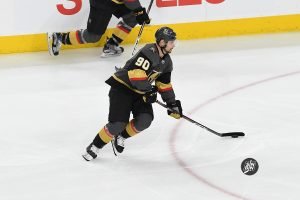 Here’s more good news, Tatar has never had consistent linemates. He should be better if/when that happens in the future. (Photo Credit: SinBin.vegas Photographer Brandon Andreasen)

There is good news for the Golden Knights, and that’s depth. If Vegas continues in these playoffs they will encounter injuries, and likely at least one to a significant player. Having Tatar available to fill that void absolutely has value, the same goes for Ryan Reaves if a bottom six forward were to be forced out. However, it’s not a good look for McPhee who still has the Filip Forsberg for Martin Erat trade hanging over his head.

Time will tell on the trade as a whole, but this decision tells us a lot about the organization, including the most important part, Tomas Tatar is the 13th best forward on this roster on April 15th, and unless that changes it will go down as an avoidable disaster at the Golden Knights first trade deadline.