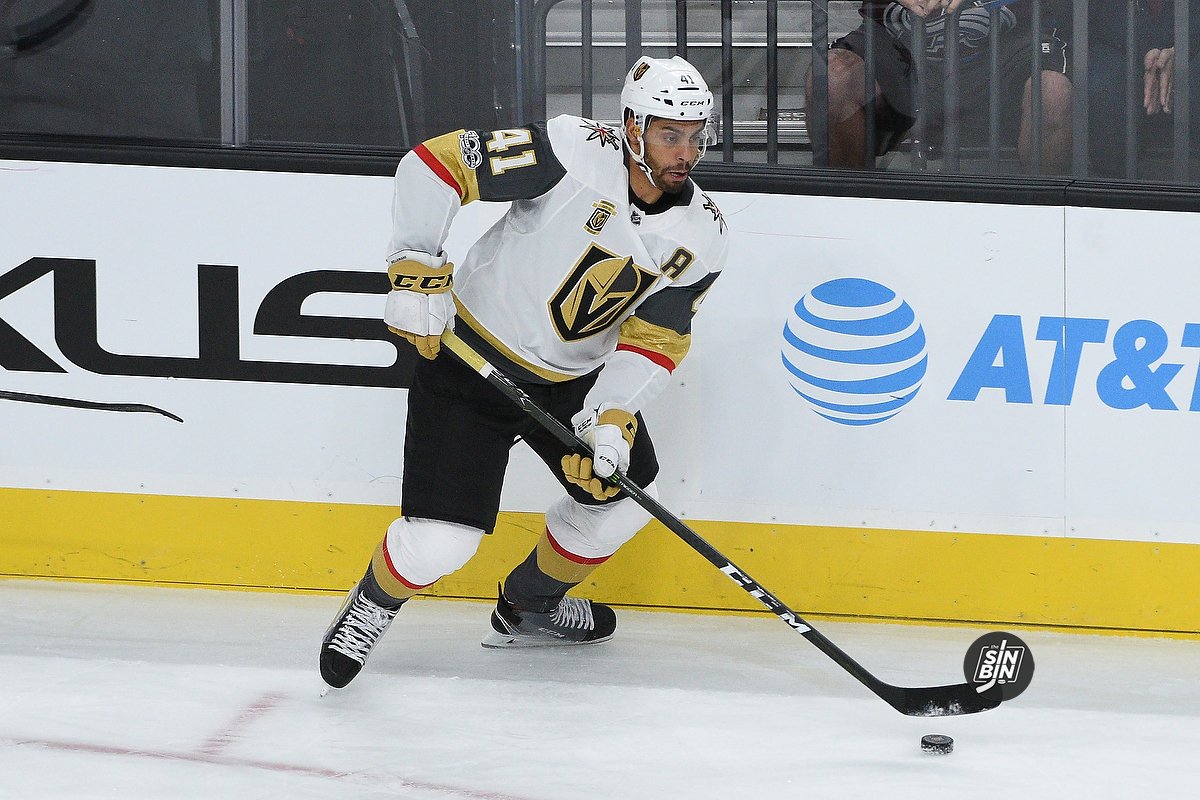 Pierre-Edouard Bellemare has carved out a specific niche in the NHL and has proven over his time that his services are truly valuable. As self-aware as they come, Bellemare, who is set to become an unrestricted free agent on July 1st, knows he’s not Connor McDavid, Sidney Crosby, or even William Karlsson.

I know my worth, I mean I am not an idiot, but I know also that I am not a guy that puts 70 points out there. -Bellemare

Bellemare is a hard-working, defensively responsible center who thrives on the penalty kill. In Game 7, he was missed sorely, but the fact of the matter is that the Golden Knights may not be in a position to re-sign Bellemare for a variety of reasons.

The Golden Knights are in a bit of a salary cap crunch, already pushing up against the upper limit and still with Karlsson’s contract needing to be signed. The team also finds itself with a plethora of centers. With Paul Stastny, Erik Haula, and Cody Eakin already under contract, and Karlsson an RFA, Bellemare’s spot on the starting lineup could be in jeopardy. Like his role, this isn’t something he’s unaware of.

I love the organization and we’re obviously going to talk. I’ve done everything I could to show them my worth and in the end if they don’t think I’m worth it for the team then that means they’re going to get somebody better, and I love the team so that means it would be better for this team. It’s as simple as that. -Bellemare

On top of it, Bellemare specifically mentioned an unwillingness to sign a one-year contract. At age 34, he knows he’s coming to the end of his career and understands there aren’t many contracts left to sign.

We love it here and we’re a bunch of spoiled kids doing the best thing we can do in our lives because of this organization. So you would be a fool to want to leave. -Bellemare

But whether it happens in Vegas or not, Bellemare’s not sweating the offseason like many unrestricted free agents.

To be honest I’ve never been the most difficult guy (when it comes to contract negotiations). I’m a French hockey player, I’ve played in rinks you would not imagine. I’ve traveled on the worst trips you could think. This is the NHL so I’m not going to complain anywhere I can end up in the NHL. -Bellemare

George McPhee is going to have to make a tough call on Bellemare as he represents much more than just a fourth line center for the Golden Knights. He’s the anchor between Ryan Reaves and William Carrier who both described Bellemare as irreplaceable. He’s also a vocal leader in the locker room, having been awarded an alternate captain role from the Golden Knights first game. He’s the team’s most consistent penalty killer, shot blocker, and his nightly effort is about as reliable as the sunrise.

But beyond that, Bellemare is simply a special character. He’s unlike just about every hockey player in the NHL because of his path, one he explained and remembered on what could have been his final day in the locker room as a member of the Vegas Golden Knights.

I remember when I was 23 there were two players from Sweden who were grinders that got NHL/AHL two-way contracts, I remember telling myself ‘oh wow, you can sign if you are a grinder?’ I remember thinking alright, I’m just going to keep working a grinding and see what will happen. Six or seven years later I’m signing a contract in the NHL. They didn’t make it, but I did. And because of those two guys, it was the first time I actually saw and believed because those guys were from a bad league and they came to the top league and they were not the best players. They were just really good at doing what Reavo (Reaves) and Will (Carrier) does. And I was thinking, why would the NHL come pick up this kind of guys, there are so many better players. But the truth is they opened my eyes to make me realize that this is possible and now I’m here in front of you guys now. -Bellemare

As I said, Bellemare isn’t your normal NHLer. His value is as unique as his road to the NHL. He’s not going to score 30 goals or tally 50 assists, but he will make your team better.

George McPhee is going to have to weigh his worth and make a tough decision. Whether he remains a Golden Knight or not, one thing can be guaranteed, wherever he ends up, Bellemare will be glad to be there.

I’m sure you are wondering, who were those two players Bellemare was referencing? Well, I asked him, and this is what he said.

I don’t want to mention their names because I don’t really like them. I played against them later and there were a lot of battles. -Bellemare

You never know what you are going to get from #41.