Last night’s game told two tales. One in which the Golden Knights sat back and played a scared game, another when in which they attacked and played the way that’s earned them 19 points in 14 games and a top three position in the Western Conference. 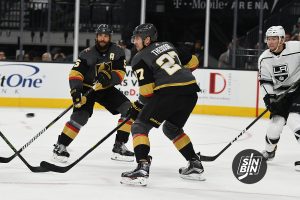 One specific difference jumped off the page while watching the game; the defensive blue line. Likely out of respect for the ridiculous team speed the Maple Leafs posses, Vegas was a bit more hesitant to challenge Toronto at the blue line. Instead, they sat back and tried to defend after the line was gained.

Here are three examples of it…

Those were all in the 1st period. Then, Gallant made the decision to swap out two of his defensive pairings, but he also made the choice to play a lot more aggressively at the blue line.

Here are the examples of what that looks like.

Obviously, you are never going to find mirror images of a change in style, as is evident by these six examples. Every situation in hockey is slightly different, so the changes could be explained in other ways, but it appears clear to me that the Golden Knights attacked the blue line much more in the 2nd and 3rd than they did in the 1st.

It’s a change that should remain the norm for the Golden Knights. It makes sense why they were a bit concerned with what the Leafs were going to bring to the table speed-wise, so the more defensive style made sense. However, now that Vegas has two periods on film of what they can do when they keep up the pressure, even against one of the fastest teams in the league, they’ve got to keep it up.