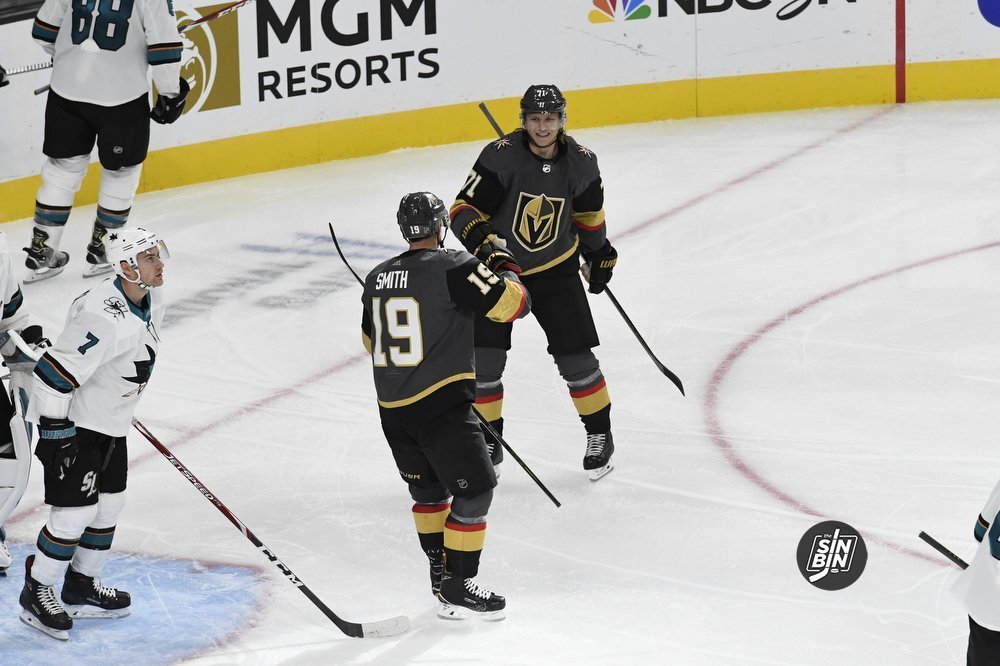 As expected, the moment Jack Eichel stepped into the Golden Knights lineup, certain things would change.

The most obvious was his role as top-line center which left Chandler Stephenson in need of a new position. At first, that was on Eichel’s left wing, but the last two games it’s been as 3C.

The next spot was on the power play. Eichel stepped right in on the half-wall to the goalie’s right on Vegas’ #1 unit. He’s played with a few different groups of players, and it appears they have found the right mix after Eichel’s game-winning snipe with 5.2 seconds left on the clock last night.

But one spot that may go under-recognized is the shift in usage that Eichel’s introduction to the lineup has caused. In his nine games as a Golden Knight, Eichel has seen just 30.3% of his shifts begin in the defensive zone. He’s taken 29 of his 115 faceoffs in the defensive zone, which has led to an increase in defensive responsibility for others.

The main group of “others” who have been shouldering that load has been The Misfits, William Karlsson, Reilly Smith, and Jonathan Marchessault.

Karlsson leads the team with 65 defensive zone draws taken since the Colorado game on February 16th, Eichel’s first. In fact, no one else is even close to Karlsson as Eichel, Stephenson, and Nic Roy, the next three in line, have combined for 81.

Prior to Eichel’s arrival, Karlsson, Marchessault, and Smith each started about 54% of their shifts in the offensive zone. With it, they each posted a Corsi right around 55%. In the nine games with Eichel, The Misfits are all under 45% offensive zone starts (Karlsson’s is 43%), with their Corsi numbers staying about the same as a group.

Simply put, they’ve been asked to take on the brunt of the defensive work and they’ve still been able to thrive offensively, especially in the second game against Colorado, the two against San Jose and one in Anaheim.

It’s also heavily affected Alex Pietrangelo’s usage. Instead of spending most of his time playing with the top-six as he did prior to Eichel’s arrival, he’s seeing more time with the depth group. To this point, it has had a pretty significant effect on his production as he’s been on the ice for just five goals in the previous nine games, which equates to 1.85 per 60 minutes. In the 46 games before Eichel, Pietrangelo was on the ice for 2.69 goals per 60 minutes, nearly a full goal more.

Eichel and Pietrangelo have shared the ice for 47:43 in the nine games they’ve played together and the Golden Knights have yet to score or be scored against with the pair out there. In Eichel’s 83:48 without Pietrangelo though, he’s been on the ice for six goals for and just two against.

In the time they’ve played together, they’ve taken 24 offensive zone draws compared to just 11 defensive, yet they have been outshot significantly (23-15), have allowed eight high-danger chances while creating just three, and have a 41% expected goals share. All of these numbers are better for both Eichel and Pietrangelo when they’ve been away from each other.

Obviously, it’s only been nine games, so the sample sizes are limited across the board. But the early returns have shown that Pete DeBoer has taken an approach of lessening Eichel’s defensive responsibilities early on in exchange for upping the pressure in different areas on Karlsson, Marchessault, Smith, and Pietrangelo.

It’s worked for some, it hasn’t for others.

Film Breakdown: Why VGK Are Stagnant In The Offensive Zone