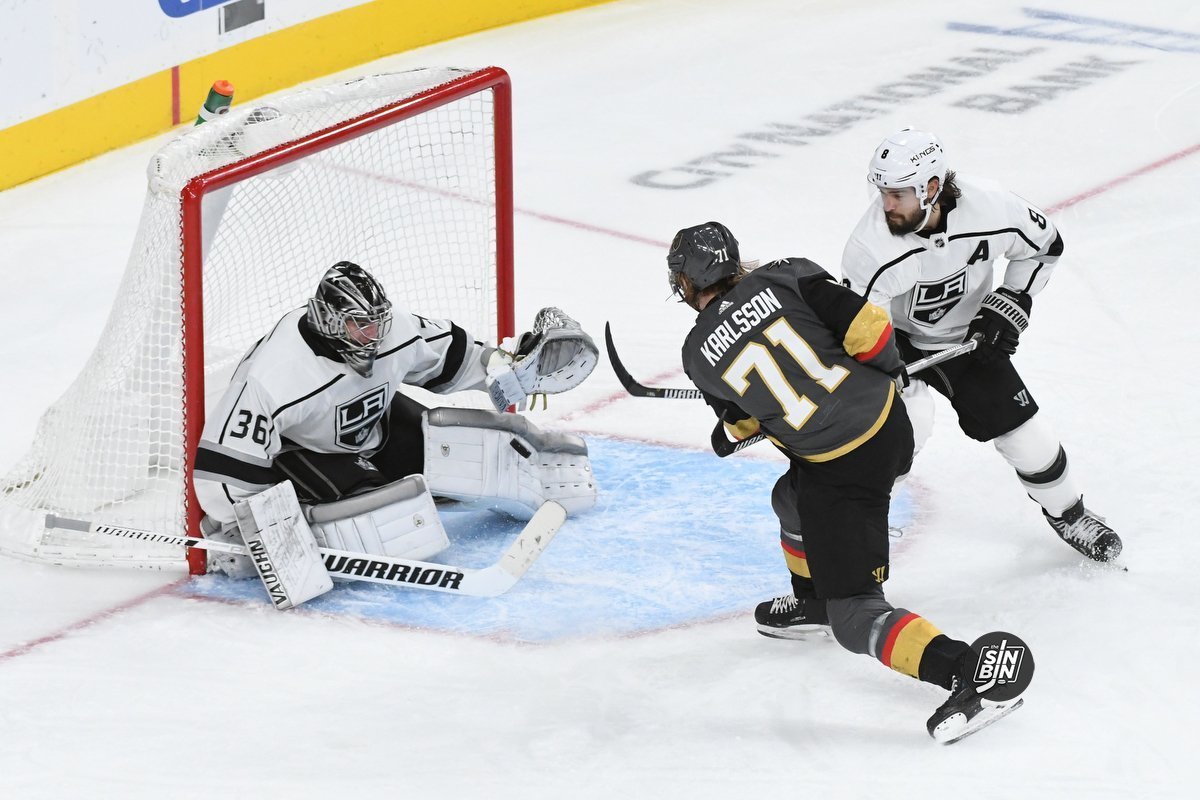 George McPhee took to the podium yesterday following the announcement of William Karlsson’s 8-year $5.9M AAV contract extension. He hit on a range of topics surrounding the current state of the team.

We’ve transcribed all of the best parts, and I’ve added a little analysis to each comment.

Further confirmation of what we’ve all pretty much been expecting since that fateful night in San Jose. Moves are coming, they are going to hurt, but in the long run, it should make this roster better. I did some digging as to when it seems like it all might get done, and my feel is by July 4th at the very latest. I think the goal is for it to all be complete by the end of the week, but sometimes trades linger because there are two parties, so it may take a bit longer to wrap it all up.

The Clarkson contract really isn’t the issue that people think it is because you can just replace that salary at the right time. It can get cumbersome for some teams in the middle of the summer but typically it doesn’t matter once you get to the season. -McPhee

LTIR is a powerful tool if you know how to use it and it appears the Golden Knights do. Vegas isn’t paying someone to take that contract off their hands.

(Karlsson’s) contract is consistent with our other core players in terms of value so it worked out. -McPhee

The core is William Karlsson, Mark Stone, Max Pacioretty, Jonathan Marchessault, Alex Tuch, Nate Schmidt, Brayden McNabb, Shea Theodore, and Marc-Andre Fleury. All are signed through the 2021-22 season (the next three seasons) with many signed well beyond. Karlsson’s contract comes in below Stone, Pacioretty, and Fleury, but above everyone else in the core. Still seems quite undervalued to me, but hey, money ain’t everything.

The great news with (Karlsson) is that if he ever tailed off at the end of that contract he’s still a really useful player because he’s great defensively and you can play him all over the lineup. -McPhee

Nothing new on Karlsson since he really burst onto the scene midway through 2017-18. He’s a stud on both ends of the ice and even if his offensive game fizzles, he’s still going to slow down the other team’s best players and he’s going to kill penalties. Of all the long-term deals Vegas has signed, he’s the one I’m least concerned about working out at the end of it.

One of the reasons we’ve done this is because we’ve tried to utilize what we call the perishable cap space and get a lot of core guys locked up now for a while because we’ll be tight this year on the cap but going forward we’ll be in a really good position. And those guys are really our core players, they are at the right age, and they fit what we are trying to build here and we expect to be a good team for a while as a result. The cap certainty helps, you can plan a lot better and we wanted to use up that inventory, cap space, now to really benefit us in the future and we believe we’re making the right decisions on these players. It’s not easy to put a good team together and keep it together but this is a major step in doing that. -McPhee

Building a winning roster is tough, keeping it is even harder. The strategy the Golden Knights have tried to deploy is to lock up everyone before they reach the ultimate goal so they aren’t stuck with impossible decisions afterward. Look at Chicago, Los Angeles, and now Pittsburgh, it doesn’t look so good anymore, but Washington doesn’t look that way. It’s risky because it may never pay off with the Cup, but if it does, this isn’t a roster that will have to be torn apart after they win.

Realistically our situation in Vegas is really attractive, (players) really like playing here, and the tax implications and cost of living here matters. The players are really savvy, they understand what they’d have to make somewhere else to net what they take home here. I think Karlsson’s contract in most markets would have to be about $7.5 to net what you have here, and that’s in the average NHL market, and in California I think it’s $9.5, but the bottom line is the fit is right and he’s happy and you can’t put a price on that. -McPhee

Let’s just face the fact, Vegas is better than literally anywhere else in the NHL, and quite frankly, it’s the best place in the world. Everyone knows it, they just don’t always want to admit it. So, when it comes to players really wanting to come here or stay here, it’s really not a surprise, and the GM figured it out quickly. Now that it’s become this destination, McPhee is playing a different game than most GMs and his roster and the way he manages it reflects it.

The good news is that we aren’t going to have to run after free agents in the summer, we’re not big game hunting this summer or next summer, we’ve got a good group, we’ll work around the edges a little bit. Typically every year there are four or five changes on the roster but for the most part we’re going to keep this group that’s done so well here together. -McPhee

The Golden Knights roster is pretty much going to look the same for the next few years, which on paper, right now, looks like a great thing. Hopefully this is a winning roster though, because if it’s not, that “work around the edges” isn’t going to change enough to turn it around. These players have to be good. They have to be good enough to win a Cup and they have to be able to do it without any outside help. If they do, you’re looking at a dynasty, if they don’t, you’re looking at purgatory.

Centers like (Karlsson) are hard to find. He generates offense and he’s really good defensively. When you have those kinds of players you can win a lot of games because they play the game right and play both ends of the rink. The ideal players are the ones that can generate offense and defend. Having a guy that just generates offense but is no good in his own end is almost a waste of time. -McPhee

Boy, that line at the end has to be a bit scary for a bunch of guys on the Golden Knights roster. No one is questioning that William Karlsson is a good player, but the idea that McPhee called offense-only players a “waste of time” might signal what’s to come in the trade market.

The “plenty of cap space” he’s talking about isn’t in 2019-20, it’s years down the road. With the majority of the roster locked in and very few in need of raises in the future, the cap increase is going to be money in the bank for the Golden Knights to continue to supplement their roster. Once again though, the team has to be good, otherwise, it’s trouble.

(On NMC/NTC’s) – That’s sort of been the template in the way we’ve done things, we’ve gone away from it once but we just don’t want to do it often. Because when you have a lot of players with no movement clauses it’s hard to manage the team and whoever your manager is has to be able to manage the team. We don’t argue over it. I did the same thing in Washington with an Alex Ovechkin of all people, you get 10 teams. A lot of times the contract itself is a no move contract. It’s lots of money and long term. If he’s playing well you’re keeping him and if he’s not playing well you can’t move him. -McPhee

He just hates no move clauses. McPhee believes it paints you into a corner as a general manager and you can’t do your job if you have too many of them. He had to break the cardinal rule once because otherwise, Mark Stone would probably be a Winnipeg Jet, but don’t expect this to change with guys in the future. Quite frankly, it’s a policy that seems impossible to actually enforce and still be able to keep all your best players, but this team pulled it off. It’s a loss for the players, and win for the organization, which means a win for fans. Flexibility is key in staying out of the NHL’s basement.