NOTE: McPhee has since spoken about this situation, clearly a lot of what is discussed in this article. Here’s the story.

Hockey media was set ablaze with a pair of tweets from some highly respected reporters today on Vadim Shipachyov requesting a trade.

Shipachyov's agent, Petr Svoboda confirms he was given permission yesterday am to search for a trade. Tough spot for the Russian family.

The NHL’s biggest early-season success, 7-1 LV, gave Vadim Shipachyov’s reps permission to look around for a trade. Just hasn’t been a fit

At face value, this appears to be simple. He’s been sent to the AHL twice by the Vegas Golden Knights, they’ve played well without him, he probably still has some value, therefore maybe he’d be a better fit elsewhere.

But that doesn’t make sense when you go all the way back to why Vadim Shipachyov was brought in to the Vegas Golden Knights in the first place. Multiple times, including this afternoon by Kelly McCrimmon (article coming on that tomorrow), members of the Golden Knights front office have commented on a “flaw” in the Expansion Draft matrix. 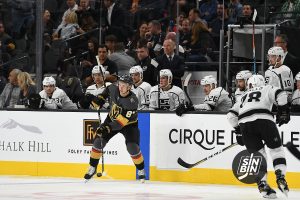 The rules allowed for the Golden Knights to get many good players, but they were not afforded the chance to get players who were “waiver exempt” and could be sent to the AHL without the risk of losing them. So, the Golden Knights made a conscious effort to solve this problem. They acquired Shea Theodore, Alex Tuch, and Keegan Kolesar via trade and they signed Tomas Hyka, Oscar Dansk and… Vadim Shipachyov as free agents.

Note that every single one of those players began the season in the AHL, because the Golden Knights knew well before the Expansion Draft ever began that they would have a glut of players at a certain position (it turned out to be defensemen). The only way to solve this was to amass waiver exempt players.

So, what’s happening here? Before I start, I want to say that this is all a hypothesis, rooted in covering this team and knowing a lot of the facts of the situation, but nonetheless, this is NOT a report of fact, it’s more of a guess as to what could be happening, and why it’s being reported the way it is.

I believe this goes back all the way to the spring when the Golden Knights and many others were courting Vadim Shipachyov. The Golden Knights coveted him because of his potential talent, but also his waiver exempt status (Evegnii Dadonov another Russian Vegas was linked to was not.). They likely offered the largest sum of money, which is why Shipachyov chose Vegas. That decision was probably influenced by the agent, Petr Svoboda, who is now in the middle of these rumors.

The agent, like everyone, probably did not consider the “waiver exempt” status that came with a 30-year-old Russian player who has never played in the NHL. So, he figured that Vegas would be a good place to go as the highly paid skilled player would be slotted in the top one or two lines. Plus, every extra dollar Shipachyov earned, the agent’s commission goes up.

Fast forward to October 6th when the Golden Knights played their first game, without Vadim Shipachyov. At that moment, the agent likely came to the realization that this was the plan all along for the Golden Knights, and that’s likely why they were willing to offer more money than others. However, as an agent and a player, there was nothing they could do. The first time, they were patient.

Then, yesterday, it happened again, and once again, George McPhee had outsmarted Svoboda. So, Svoboda reaches out to a few reporters and says the player and agent are “seeking a trade.” Meanwhile, the Golden Knights remain in complete control of the situation. They can seek a trade all they wish, but it’s up to McPhee to actually make that deal happen.

A few preseason games and three regular season games is an awfully short period of time to “give up” on a player as many are suggesting. This would be a massive indictment on the Golden Knights scouting staff if they were SO far off on Shipachyov’s skill and it’s this apparent in less than a month.

The final piece of the puzzle is why would excellent reporters put this information out there? The answer is rather simple, especially to those of us who are familiar with the agent/reporter relationship. Agents often break news of free agent signings, injuries, and much more to reporters. Why? Because reporters are also valuable to agents in helping with negotiations, and in turn earning them more money. Scratch my back, and I’ll scratch yours.

Oh, and by the way, this agent has a history of funny business with Russian players, but I’ll let you go down that Google search wormhole yourself.