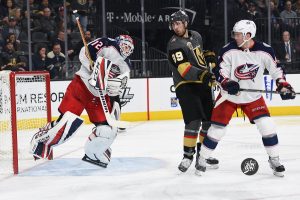 VGK headed back to Phoenix next week.

Due to the ban on contact sports in Santa Clara County, we will be playing our Feb. 1 and 3 home games at Gila River Arena in Glendale, AZ.
https://bit.ly/3cduTh0

No one, including those making the decisions, can tell you when this roster juggle will sort itself out for good.

But I can tell you the options they have and show why the timeline is so fluid. https://sinbin.vegas/the-roster-juggle-rolls-on/

DeBoer says the 5-on-5 has been decent to good, he's very happy with the PK, but the PP needs improvement.

If it not scoring goals, he wants it to at the very least stop sapping energy from the other parts of the game.

C'mon, let's go, I don't even care if they win anymore, I've got some masks to give away. #HockeySquares