When Mark Stone was acquired by the Golden Knights on Feb. 25, it impacted the entire team.

But no one was more affected by bringing Stone into the fold than Alex Tuch. 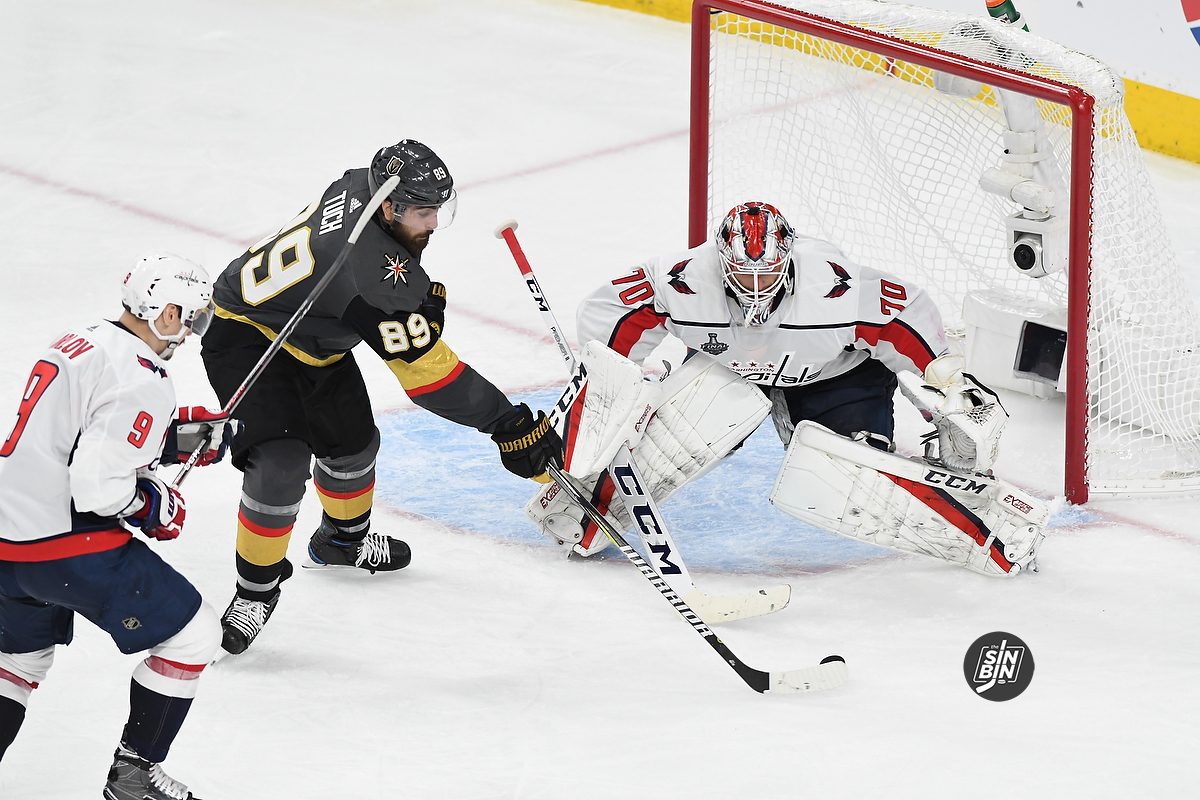 The 22-year-old from upstate New York was playing on the second line with Paul Stastny and Max Pacioretty. Since the trade, Tuch is now skating on Vegas’ third line with Cody Eakin and either Tomas Nosek, Brandon Pirri or Ryan Carpenter.

He has gone about his business, working harder in the defensive end of the ice, fitting in with his new linemates, finishing his checks and forechecking hard.

The second-year right wing has 49 points. He has already surpassed last year’s totals of 15 goals and 22 assists with 19 goals and 30 assists after scoring the final goal in a 6-3 win Sunday over Edmonton at T-Mobile Arena.

It hasn’t really been an adjustment. I’m supposed to go in there and not change my game. I might be in a different place at a different time, but you can’t change your style. I don’t think it matters who I’m out there with. My job is to use my speed, get shots and make plays. -Tuch

All of this bodes well for the upcoming playoffs, a brand of hockey that seems well-suited for Tuch’s game and skill set. There are 10 games left to the regular season. Whether or not Tuch wins the team scoring race should be secondary to the fact his game is really good at the moment and he can be expected to carry his solid play into the postseason.

I hope so. I thought I competed well last year (in the playoffs). But you don’t want to look that far ahead right now. Whatever line we go up against, we need to play our game and not worry about what the matchups are. -Tuch

He has displayed confidence since opening night. He knows he’s in the lineup. And with Stone now firmly entrenched on the line with Pacioretty and Stastny, Tuch can focus on working with Eakin and whoever is on the left flank. 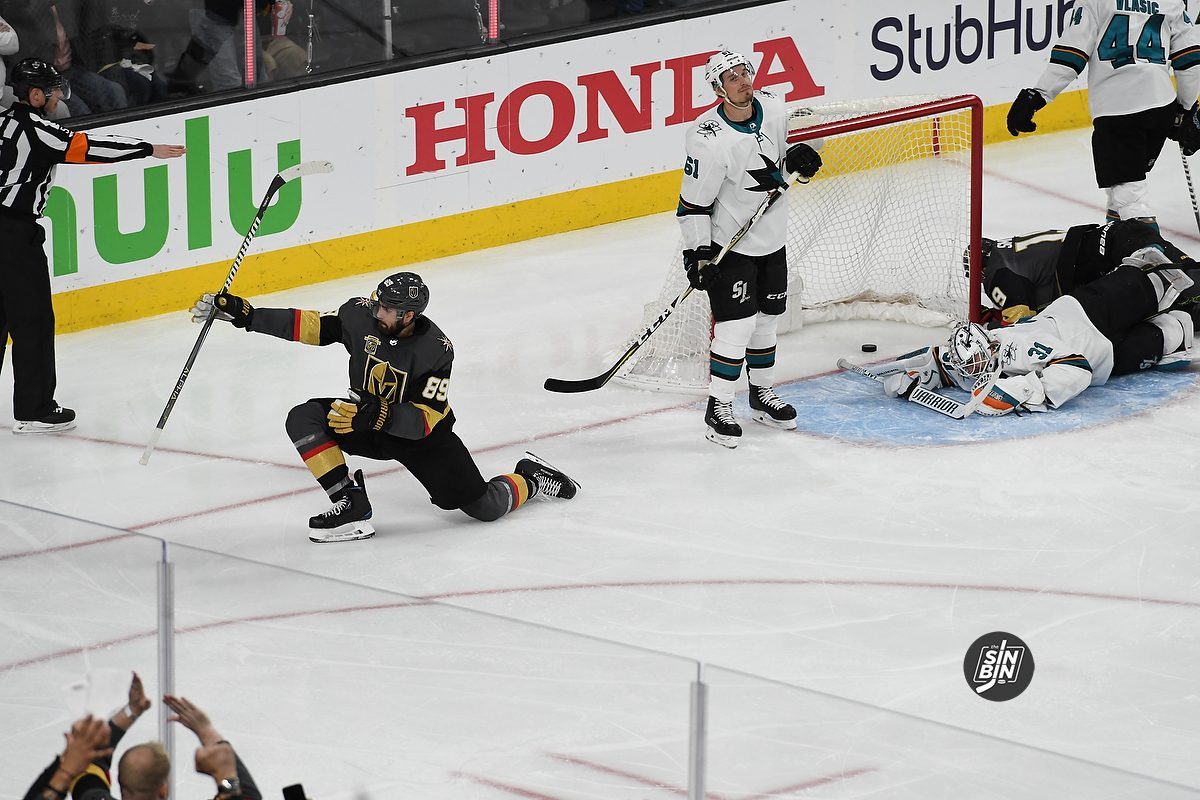 And while Tuch may be on the third line, his role will be invaluable to the Knights in their quest to return to the Stanley Cup Final. He’ll get a turn on the power play. He’ll play against a team’s third line rather than a first or second unit and with his size and speed, he could win a lot of battles in the corners and in front of the net because most teams can’t match up with him physically.

You can count on Gerard Gallant exploiting that whenever he can in terms of matching up lines during the playoffs. He downplayed the angle Sunday after the morning skate. But he likes the way Tuch is playing going down the stretch.

Tuchie’s been really good. He’s improved from last year. He’s a young player and he’s getting better defensively with time. Whether he plays on the third line or the second line, I don’t think it means a big difference. We have plenty of talent to go around him and I want him to play the same game, whether it’s the first, second or third line. He’s a fast guy with a good shot so we don’t want him to change. -Gallant

Tuch seems to be finding his offensive game again. he had a goal and a couple of assists a week ago at Vancouver and with Sunday’s goal, Tuch looks comfortable.

I went through a bit of a rough patch for a while. But lately I feel more confident. The Vancouver game was good for me and the line and tonight was a good night for the line. We had a couple of goals and we probably should have had a couple more.I’m getting to the dirty areas and winning some battles and we have some good chemistry. I’ve played with Eaks (Eakin) on and off for the past two years so I know his game. And Nosek’s a really smart player too. -Tuch

Tuch has already made strides from a year ago. His numbers are better. His overall play is better. He is smarter, more confident and has a comfort level now that allows him to fight through slumps and still contribute to the team.

He had a great start to the season, but he tailed off a little bit offensive-wise, but he’s still doing a good job and we’re happy with him. We like him a lot. He’s a good player. -Gallant

And while it has been a very good second year in the NHL, Tuch’s best hockey may well be forthcoming next month when the playoffs begin. And whether he finishes as the team’s leading scorer or not, the Knights will need him if they hope to make another run to the Final.

Just a quick reminder that I will be at Red Rock Resort’s race and Sports Book at 6:30 p.m. Monday to sign copies of my book. I’ll be there until 7:30 so if you’re coming out to the VGK watch party for the game with the Sharks, please swing by, say hi and buy a book. Cost is just $28.95 (cash only).

I’ve enjoyed the three previous signings and have met a lot of great Golden Knights fans. For those who have already purchased a copy, my sincere thanks. If you’ve yet to get your copy, now’s your chance.

See everyone at Red Rock!

I'd still be surprised if this makes it to the regular season, but it does seem like Hague is in this for the long haul.