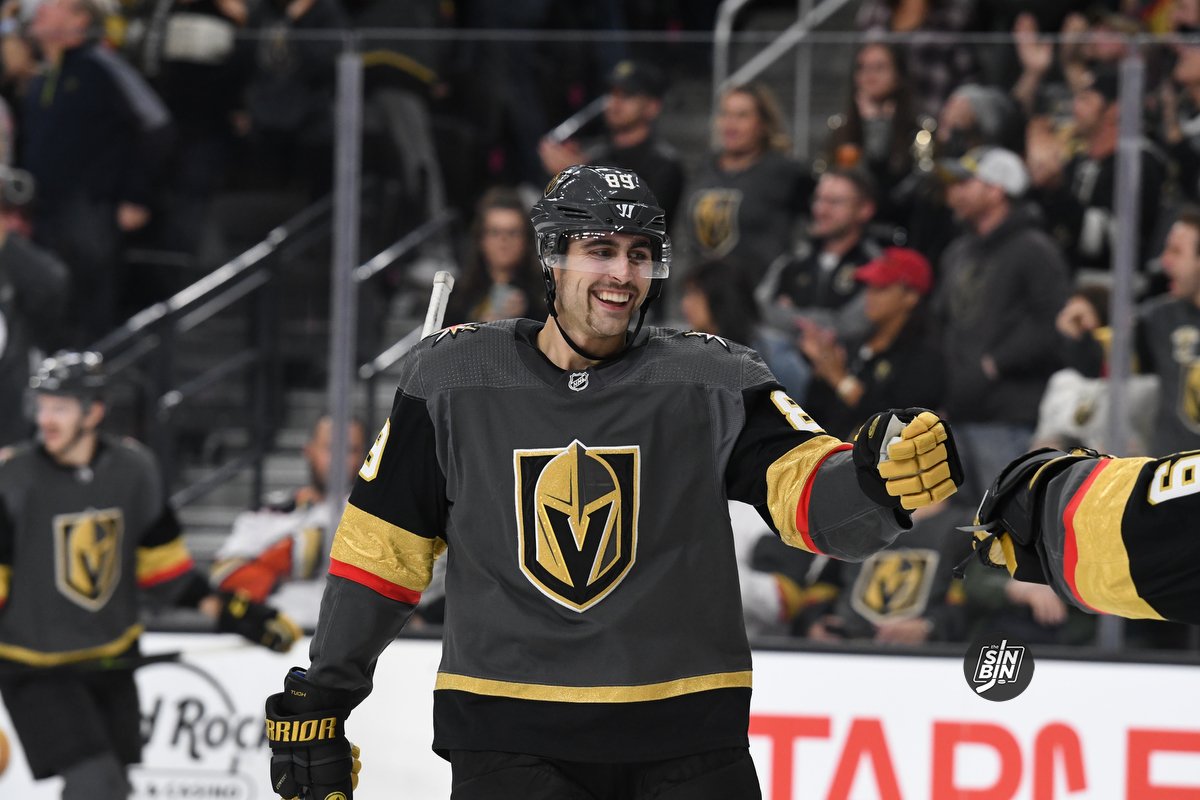 Without Tuch’s help, Pacioretty has yet to find the net. (Photo Credit: SinBin.vegas Photographer Brandon Andreasen)

Max Pacioretty has been red-hot over the past two weeks. His seven-game point streak just concluded, he’s scored eight goals, and has tallied multiple points in three of the last four Golden Knights games. Finally, Pacioretty is breaking through and displaying the skills and production that was expected of him when he was acquired for Tomas Tatar, Nick Suzuki, and a 2nd round pick.

However, as we do on every goal in the hockey, we need to award an assist for Pacioretty’s turn-around, and it goes to Alex Tuch. A single stat illustrates it best, so we’ll start there.

Of course, Cody Eakin has had a positive impact on the line as well, but not nearly as much as Tuch. It’s a small sample, but in the 15:31 Pacioretty played with Eakin and not Tuch, the Golden Knights allowed two goals and didn’t score any.

Sometimes stats are misleading though, especially “on ice” stats that are credited simply for a player being on the ice and not necessarily involved in the play. So, I decided to go through every 5-on-5 goal scored by Pacioretty to see what impact Tuch had on the play. (You can see them all at the end of this article.)

Pacioretty has scored five goals while playing at 5-on-5 this season. In the five goals, Tuch has an assist on all five and he has the primary assist on two of them. Tuch also has a major impact, by that I mean, there’s no way Pacioretty scores without Tuch doing what he did, on three of the five. Quite simply, Tuch is driving the play for the line that has turned around Pacioretty’s season.

Now, it’s important to note that this is not an article trying to point out that Pacioretty is not a good player, or that Pacioretty isn’t red-hot and has been a major impact for the Golden Knights turnaround. Instead, it’s to show that it took the Golden Knights a bit of time to find the right fit for Pacioretty both in linemates and in role. He’s becoming the finisher on a line with two terrific forecheckers and fast skaters. He’s settling into the low-slot position on the power play, where he’s scored most of his non-5-on-5 goals. And most importantly, he’s not missing when the chances have arisen.

But finally, the main reason for this article is not to be negative to Pacioretty, it’s to be insanely positive towards Alex Tuch. He has been the driving force behind Pacioretty’s resurgence and he may deserve as much, if not more, credit for Pacioretty going from 2 goals in 16 games to 10 in 24. Since returning to the lineup the Golden Knights are 10-9-1, but they are 1-4-1 in games in which he does not have a point. Thus, 9-5-0 when he has at least one point and 6-1-0 when he gets multiple points, which he has done in three of the last four.

Tuch has been the most consistent skater on the Golden Knights and he has helped turn a line that was struggling into the one that’s helped lead Vegas right back into playoff contention. He has 20 points in 20 games and has yet to have his 23rd birthday. He may not be an All Star this year (even though he should be), but y0u can take it to the bank that he will be at some point in the future.

Tuch picks up the puck behind the goal, feeds Pacioretty, shot stopped, puck worked back to Tuch, drives to the net, Pacioretty scores on rebound.
Tuch Impact: Major

Good entry from Pacioretty, lays puck to Tuch who makes a great diagonal pass to Eakin. Another good pass from Eakin to Pacioretty and Pacioretty scores it.
Tuch Impact: Major

Tuch entry, lays it to Pacioretty intended for Eakin, pass across, kicked in by EDM player
Tuch Impact: Minor

Tuch through neutral zone with speed, gets it to Haula who chips it in to the zone. Haula creates turnover behind the goal, gets it out to Pacioretty who scores.
Tuch Impact: Minor