Age Old Hockey Argument Strikes The Golden Knights: Should You Stick Up For Teammates If It Means Taking A Penalty? 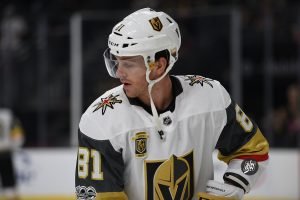 Do the Golden Knights protect each other enough? It’s a topic we at SinBin.vegas have been arguing for years, and it most recently on the last episode of the Podcast. Then, on Sunday, Jonathan Marchessault answered that question when he backed up teammate Nate Schmidt after being crushed (legally) by Carolina’s Elias Lindholm.

Oh it’s awesome. It’s great too see, he’s a great teammate. When you see stuff like that it brings the team together. For him to be a goal-scorer and not known for that stuff, sticking up for teammates, it’s great. –Brayden McNabb

He gets the boys a little fired up. Little guy out there mixing it up. You know, this day and age you don’t get those big bruisers running around. I guess 81 is the big bruiser for us the last couple of games. -Nate Schmidt

Nate on Marchy "sticking up for him." Kinda rides the fence a little bit here. pic.twitter.com/4zAV4akCIV

Did Marchessault’s Hakkasan bouncer reaction resonate in the locker room?

We expect that from everyone in this locker room. It’s good on him. A lot of guys were proud that he stood up and did something. –Reilly Smith

For those who missed the Jonathan Marchessault-Elias Lindholm heavyweight brawl. pic.twitter.com/PpsctOC4if

Muscles Marchessault never hesitated as he plowed into the Hurricanes forward, baiting Lindholm to drop his gloves.

It’s obviously good when you have guys backing you up. It’s an important thing that it’s not just one or two guys sticking up for teammates. You need everyone in there. Team toughness is a big thing. It’s important in this league. -Smith

Of course, the naysayers (cough, Ken) will point to the power play goal immediately scored by Carolina. Marchessault’s extra two-minutes for instigating put his team in a tough defensive spot. Maybe not the model example, but as we’ve heard from the players, there is a time and a place to get involved.

Given the time of the game, three nothing, the way we were playing, yeah I think it got our guys going a little bit. Not the we needed an extra spark, but there’s a time and place for that during a game. I think it shows the continuity of this locker room right now. Just the way guys want to battle for each other. With what he did, it just goes around the locker room. -Schmidt

The Golden Knights defenseman admitted he was a little disappointed Marchessault got involved. Only because Schmidt wanted in on the action.

Here are the moments leading up to the fight. Lindholm laid a big (and clean) hit, then Marchessault went at him. pic.twitter.com/R5yhcWh98X

Is sticking up for teammates important for this team? Even if it means taking an instigating penalty?

Is this argument over? Of course not. Fans are split on the matter and for good reasons. Taking unnecessary penalties can hurt a team’s momentum and success. On the other hand, teammates going to battle for each other can create a winning bond.

Either strategy, the Golden Knights don’t have to worry about unity.