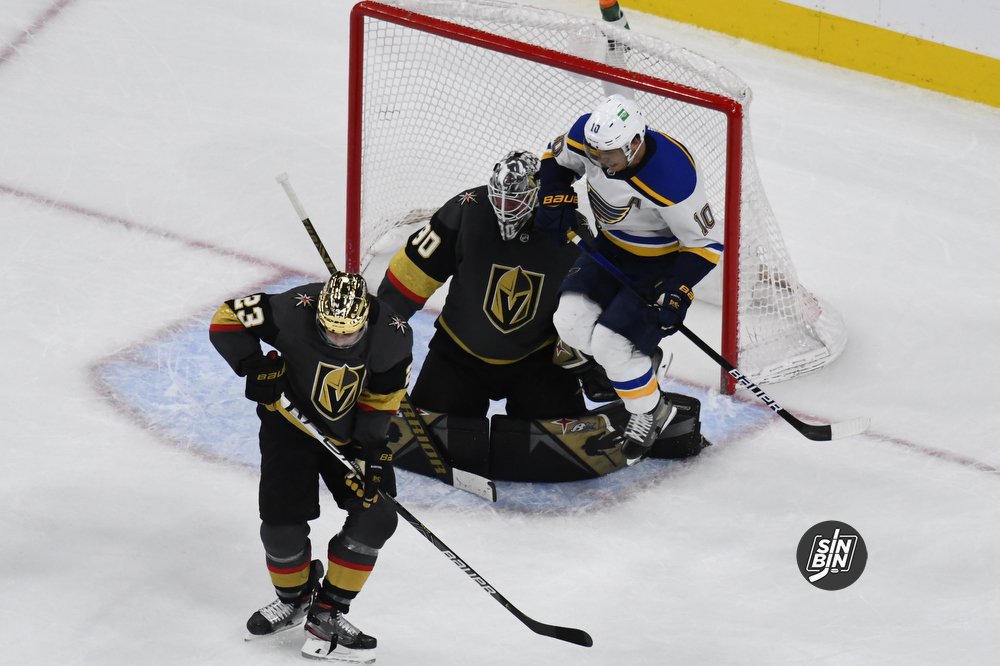 There’s not much to like about the format of this season’s schedule, but if there is one place where it offers something unique it’s in how teams respond to each other on their second night playing the same team.

On Friday night, the Golden Knights really struggled in the first period dealing with the St. Louis forecheck.

They came out flying in the 1st and were very physical and they took it to us at the beginning of the game. -Alec Martinez

The Blues constantly caught the Golden Knights standing still in their own zone and they appeared to be a step faster all over the offensive zone because of it. Vegas eventually conceded three times in the first two periods before they really settled in.

When presented with the same challenge the very next night against the same opponent, the Golden Knights’ response was tremendous.

As a group on the back end I thought we got back a lot quicker. We made a conscious effort to kind of help each other and move the puck quicker. -Alex Pietrangelo

This season the Golden Knights have won so often in the first of the two games between teams that usually the response has had to come from the other side. Even though they did end up beating the Blues on Friday, they felt they had more to give on Saturday and that showed up.

The key to it was recognizing where the opponent challenged Vegas and adjusting to eliminate it the following game. This is exactly what it takes to win a playoff series and the Golden Knights passed the dress rehearsal with flying colors.

They have really good structure so you’ve got to try and get through that as quickly as you can and when it’s not there you have to be willing to make the simple play and play in the neutral zone. I thought we made good decisions with the puck tonight. It’s just a matter of sticking to that plan. -Pietrangelo

After a game in which that structure made life difficult on the Vegas defense, they were able to quickly adapt to the speed of the Blues forecheck and neutralize it on Saturday.

The Golden Knights are a team that truly can play any way their opponent forces them to. In the Blues case, they’re going to force Vegas to be clean with the puck breaking out of the defensive zone. On Friday, they weren’t, on Saturday, they were.

With a playoff matchup seemingly on the horizon, that’s a lesson the Golden Knights are going to need to remember. Not only how they dealt with the heavy forecheck, but how quickly and efficiently they were able to do it between Game 1 and Game 2 (and really between periods 2 and 3).

Last year, the Golden Knights struggled to change their approach when they ran into a Dallas team that gave them trouble. This year, they have a lot more practice with it in a season jammed with common opponents. The saying goes, luck is what happens when preparation meets opportunity. Last year, luck was tough to come by, hopefully, the extra preparation helps this time around.