Remember when goalie depth was widely considered to be the best asset the Golden Knights got from the Expansion Draft? When Marc-Andre Fleury was the starter and Calvin Pickard was set to back up him. That’s changed a bit, huh?

But before we get into what’s going to happen moving forward, and a bit of what’s happened already, let’s dispell a rumor that has already popped up to this point. 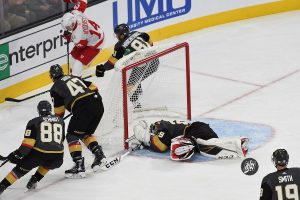 The Golden Knights are not likely to make a trade to acquire a “starting” goalie. For proof of this, think back to the timeline of the backup goalie thus far. Three days before the season began George McPhee claimed Malcolm Subban. The next day he waived Calvin Pickard in somewhat a surprising move, but just another in a long line of focusing on the future rather than the present for the Vegas front office.

That move left the Golden Knights one moment away from having to put in a 23-year-old goalie, who was waived by the Bruins, into the net for good, and they were comfortable with that because this season’s not about winning. Four games later, that moment came, as Fleury took a knee to the face and suffered his third (maybe fourth) career concussion.

They didn’t run out and make a trade. Not because they believed so much in Subban, because they still, despite the record, aren’t focused on winning this season. They simply put Subban in the net, and called up another backup (Maxime Lagace at the time). Now, Subban is hurt, and Oscar Dansk appears to be the temporary starter, and just like before, they probably aren’t going to panic and make a move.

Playing Dansk is really no different than playing Subban because… say it with me now, this season isn’t about winning. 6-1 aside, the plan is not likely to change for George McPhee. He’s not in the business of giving up an asset to bring in another goaltender when he’s still got two healthy ones left. He could sign one, he could claim one on waivers, but the chances George McPhee gives up anything to bring in another goalie are slim to none.

So what does the immediate future hold for the Golden Knights? First off, Fleury’s concussion situation remains a tender one. No one is in a rush to get him back on the ice until he’s 100%. When that will be, we have no idea, but everything else going on is secondary to his long-term health. As for Subban, it appeared to be some sort of a muscle pull. This tweet is the only actual piece of intel we have to this point.

Malcolm Subban will have an MRI on Sunday after being injured on a save in the 3rd vs St. Louis. Team source says "probably out weeks"

Speculating on injuries is a dangerous game, so we aren’t going to play it. When either is ready, they come back in, but while both are out it’s not all going to be on Oscar Dansk’s shoulders.

When Fleury went down, the Golden Knights recalled Lagace, not Dansk. Lagace backed up Subban for two games before he was sent back to Chicago. During that week while Lagace was here, the Wolves did not play a single game. When they did, Lagace was sent back and Dansk was brought to Vegas, presumably to ride the bench while Lagace played in Chicago. Then Subban goes down, Dansk saves the day, and all of a sudden he’s expected to be the guy moving forward. 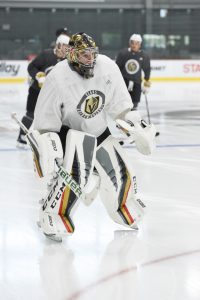 Not so fast. Dansk will probably remain in the net for Tuesday’s game against the Blackhawks. Why? Because Gallant seems to be a heavy subscriber to the “if it ain’t broke don’t fix it” mentality. Dansk played well, he’ll get another shot. But if he doesn’t, they might not wait long to go to Lagace. The recent roster moves actually indicate that Lagace could be the higher guy on the organizational depth chart than Dansk.

It’s truly become a giant mess, yet through it all, the Golden Knights keep on keepin’ on. So, stop calling for trades, stop worrying about the injuries, and stop with the negative thinking about the goaltending. Somehow, someway, it’s working, and there’s really no reason to believe Oscar Dansk and/or Maxime Lagace can’t hold down the fort like Subban was. Right?