A Study On The Expected Regression Of William Karlsson

The name William Karlsson and the word “regression” have been joined at the hip this offseason. Following his breakout season scoring 43 goals, posting a +49 rating, winning the Lady Byng, and finishing top 10 in both Selke and Hart, it seems like everyone assumes a decline in 2018-19.

Personally, I’m not a fan of assumptions, I prefer facts, or at least stats I can package as something resembling facts. So, I set out to see if regression for William Karlsson is indeed inevitable, and if so, how major it may be.

The normal way to project a player’s statistics in the NHL (or any sport for that matter) is to look at that player’s career history. However, with Karlsson that doesn’t really work. To begin his career he was seeing minimal ice time, playing on the fourth line, and had defensive responsibilities similar to those of Pierre-Edouard Bellemare’s on the Golden Knights. In Vegas, he’s the top line center, is used in all situations including the top power play and penalty kill units, and plays on a line with two high-level offensive players. His stats in Columbus are essentially hogwash because his role has changed so much, but at the same time, simply using his one mega season in Vegas feels like a bit too small of a sample size to project his future. 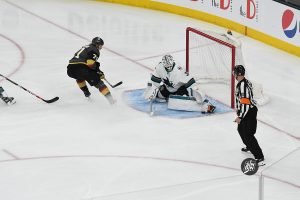 Actually kind of surprised we even have a picture of him NOT scoring. (Photo Credit: SinBin.vegas Photographer Brandon Andreasen)

So, I had to find another way. The way I chose to go about it was to examine the follow-up seasons for players who have had years in which they put up numbers similar to Karlsson’s.

I’ll prove it in a second, but before you go jumping off the cliff, while the numbers suggest a drop-off, they do not suggest Karlsson’s going to become an average player. Instead, they show just the opposite. Using this method of comparing players with similar statistical seasons to Karlsson, he should be projected to score 35 goals, shoot at around 16%, and stay a legitimate Selke award candidate.

After finding all the players who had qualifying seasons, I looked up what they did in that same category the following year. I added up all of the follow-up season numbers and divided it by the Karlsson-esque season numbers to show the percentage of regression to be expected in each category. Here are the numbers.

As you can see from the tables, regression is essentially inevitable. Aside from Alex Ovechkin’s 2013-14 to 2014-15 season every single player declined every single season following their massive breakout in that category. Again, that’s 47 out of 48 players over a five year span and it took a 53 goal season by Ovechkin to be the one that broke the mold.

That to me is conclusive enough evidence to say that Karlsson would have to be super-human to repeat his numbers in just one of the five categories, let alone all five.

The numbers do vary a bit though.

Goals and even strength goals go down a bit but aside from a few outliers, there’s no major concern Karlsson will slip back to his single-digit goal days.

Plus/minus is a horribly volatile one. No player who racked up a +34 rating over the last five years followed it up with anything even close. Nikita Kucherov’s +9 was the best and even that can be considered an outlier. 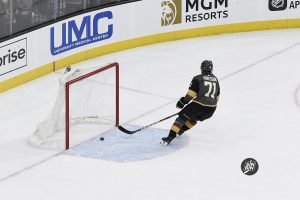 He only shoots when he scores. (Photo Credit: SinBin.vegas Photographer Brandon Andreasen)

The most surprising one was shooting percentage. It’s the number one stat people point to when saying Karlsson will regress, yet it ranked fourth out of the five I used as the starkest decline. Karlsson shot 23.4% in the regular season, 14% in the playoffs, and 18% from the Western Conference Finals in. Only two of the last nine players to eclipse the 20% mark shot less than 13% the following year. If Karlsson shoots 13% on the same number of shots, he’d score 24 goals. If he’s closer to 16 or 17%, we’re looking at somewhere around 30.

Finally, defensive point shares was a bit surprising. For those who don’t know what that stat is, it’s basically an estimation of how many points (in the standings) a player is personally responsible for. It’s broken down offensively and defensively. William Karlsson led Golden Knights skaters with 11.8 point shares. Thus, without him, the Golden Knights would have been a 96 point team. His number can be broken down into 8.3 on offense and 3.5 on defense. His defensive point share number led all forwards in the NHL, by a fairly wide margin. The decline in defensive point shares by the previous season’s leader is a bit stunning. When you look at Selke voting (which determines the best defensive forward) it’s almost always the same players in the mix. But when you dive into the stats, the best guys never seem to back up their big seasons. Nonetheless, the decline isn’t massive as the numbers project Karlsson to be around 2.4 which was better than three of the five players (Bergeron, Barkov, Koivu) that finished above Karlsson in Selke voting.

When we use the regression percentages based on averages, here’s how Karlsson’s numbers come out.

This is obviously a very inexact science and was only projected using the past five years, but just take a look at the names on each of the lists. Even though there were drop-offs across the board, almost every guy, with the exception of Rick Nash, put in a pretty darn good season following up the massive one.

It’s ludicrous to say that William Karlsson isn’t going to experience a level of regression in 2018-19. In fact, it’s reasonable to even say that regression is going to be drastic. However, it’s just as ludicrous, if not more, to suggest Karlsson will be anything but a high-end center and a defensive stalwart next year.